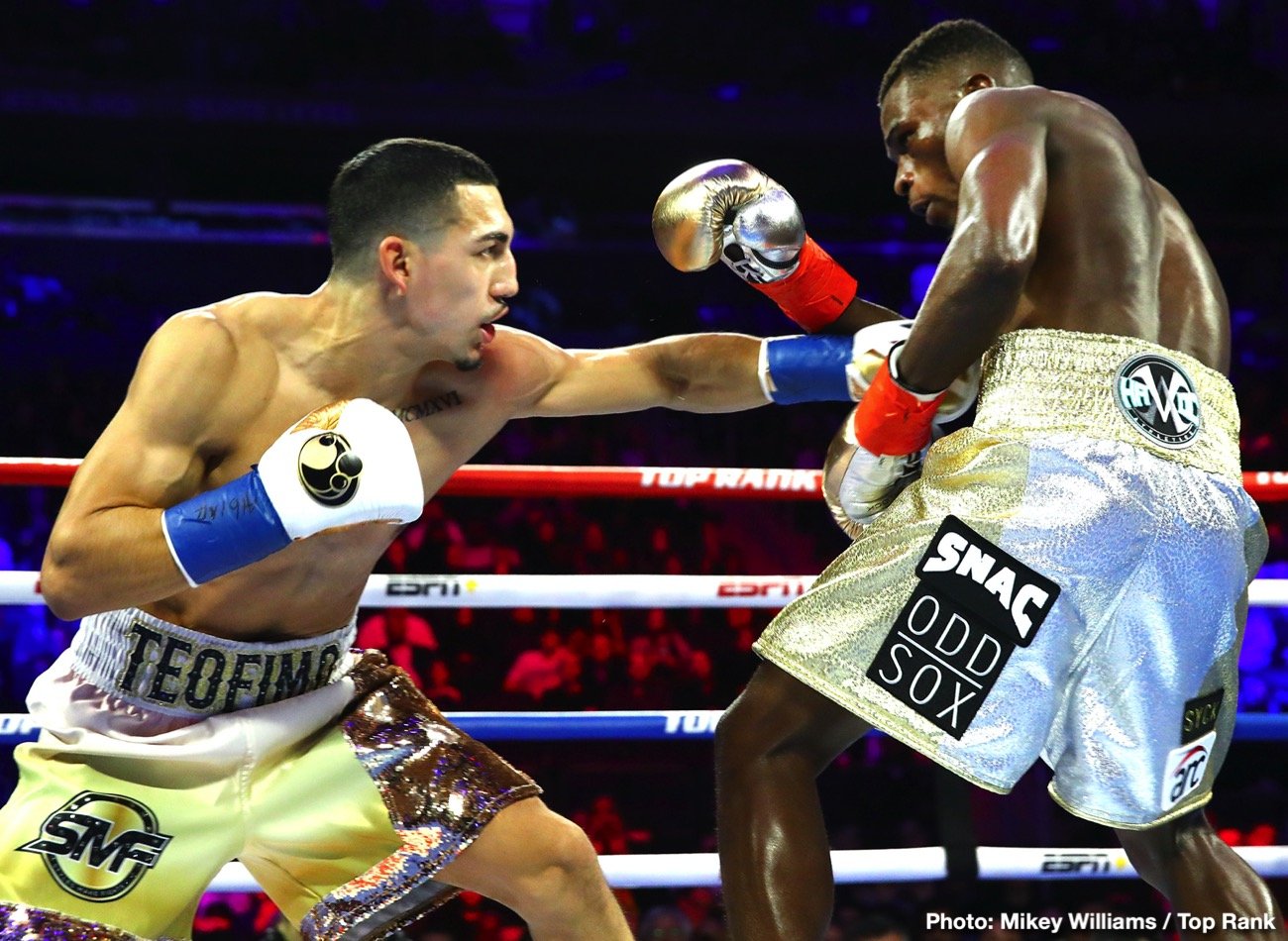 By Dan Ambrose: Teofimo Lopez is interested in staying at 135 a little while longer after his October 3 fight against Leo Santa Cruz so that he can take on Gervonta ‘Tank’ Davis. Teofimo vs. Tank Davis will be a great fight on pay-per-view for 2021 if the two win their next contests.

According to Chris Mannix of SI, IBF lightweight champion Teofimo (15-0, 12 KOs) will delay his move to 140 if he beats WBA/WBC/WBO 135-pound champion Lomachenko (14-1, 10 KOs), and if Davis wins his next fight against Leo Santa Cruz.

It’s widely believed that Davis, 25, will obliterate the 31-year-old WBA super featherweight champion Santa Cruz, who is starting to look more than a little shopworn after the many wars he’s been involved in during his 14-year professional career.

A few years ago, you could understand their reluctance to let Tank Davis fight Lomachenko, but not now. Lomachenko is 32 and is beginning to show his age. 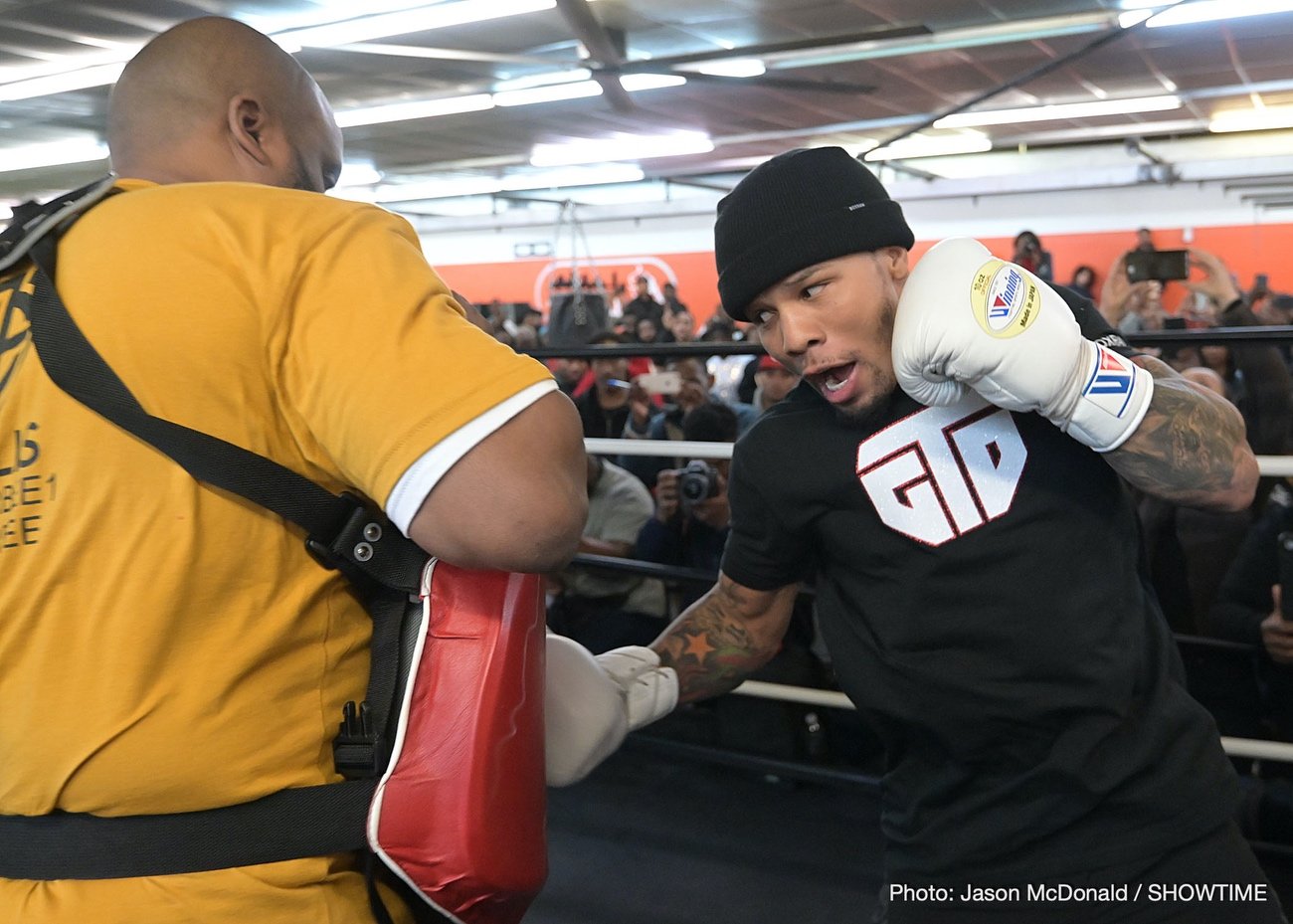 Also, there’s certainly no excuse for  Mayweather not letting Davis face the younger Teofimo. Tank is three years older than Teofimo, and he has a lot more experience at the pro level.

Teofimo would be too big of a fight for Tank Davis for Mayweather Promotions to turn down if he’s coming off of a win over Lomachenko. That’s a big if, but we can’t rule that out. Loma is getting old, and all that wear and tear from his long amateur career is starting to show.

“Lomachenko has made it clear; he’ll fight Tank Davis at 130 or 135 if that fight is on the table for Tank Davis in the first half of 2021. Does he take it, or do we continue to hear the same stuff about network problems, and I’m not on your time table and all that stuff we hear when it comes to Tank at this point.

“They’re all around the same age as each other. They should be getting in the ring with these round-robin type of tournaments. I think Gervonta walks through Santa Cruz.”

The major problem with the idea of Teofimo staying around at 135 to face Davis is he probably won’t win his upcoming fight against Lomachenko on October 3. Teofimo is already seen as the underdog in this fight, and he has only a puncher’s chance.

Lopez can beat the highly skilled Lomachenko, but he’s probably going to need to knock him out to win. Loma is too good of a boxer for Teofimo to win a decision unless he knocks him down three or four times during the fight.

It’s going to take a different game plan for Lomachenko for him to beat Lopez, however, because he’s not going to be able to throw a massive amount of pitty-pat shots like he usually does. If Lomchenko stands in front of Teofimo, he’s going to get hit with some gigantic heat-seeking missile shots.

“I think shopworn is the right phrase when it comes to Leo,” said Chris. “We were both at his last fight in Las Vegas [against Miguel Flores], and he wasn’t all that impressive. He has been in a lot of wars over the years, and fighters like that have a finite shelf life.

“When you couple that with him jumping up to a weight class that he’s new at and isn’t physically built for, if I’m picking anybody in that fight [Santa Cruz vs. Gervonta], it’s Davis mid-round by devastating knockout.

“I think it has that kind of potential. I think I said this to Abner Mares. He [Santa Cruz] could fight Abner Mares five more times, and it would be the same thing.

“They would be throwing bombs at each other, and Abner would never win. I don’t think Abner could ever beat Leo Santa Cruz. I just don’t think he throws enough.

“He throws a lot of punches, but Leo throws just enough more to give him the edge in those situations. We need to see that soon in 2021 is the best time, and only time we get to do it,” said Mannix.

Tank is going to go after Santa Cruz and beat him to the point where the referee needs to step in and halt the fight. Santa Cruz has the type of chin that will allow him to stand in there and soak up punishment from Davis round after round, but the referee won’t let the fight continue if it gets too one-sided.

Lomachenko is an excellent fighter, but he’s human. He can be hurt like any fighter in boxing, and he’s not going to be able to survive for long if Teofimo can land 10 to 20 of his best shots in each round.

“Gervonta, he has incredible power, even though he doesn’t talk much, he has a great following, and he does move the needle. There’s something about him,” said Mike Coppinger.

“I don’t know if you call it charisma or what, but he has it. Leo Santa Cruz crazily is his toughest opponent on paper. Santa Cruz, I don’t know if he’s shopworn, but he’s definitely out of his prime after this point after all these wars with Mares, Frampton.

“As long as Gervonta takes care of him in dominating fashion, I would hope that we see him against the likes of Lomachenko and Teofimo. I want to see what he has. It’s really sad that we have this quandary of all these fighters.

“Just what do they have? We should know by now. The only thing I think could give Gervonta problems against Leo Santa Cruz is he throws about 1,000 punches per fight usually, and Gervonta is a guy that sometimes struggles with activity.

“So maybe he can steal rounds that way. I’ve never seen Leo Santa Cruz hurt. Has he been knocked down? I’m not sure, but he’s one of those guys that people go crazy about his fights.

“I’m not the biggest fan of his fights with Mares. Not a lot of clean punching. You just see two guys furiously trading and no one sitting on their shots—just a bunch of arm punches.

“I think Gervonta’s last performance was kind of underwhelming against [Yurirokis] Gamboa is what gave people a little bit more interest in this fight against Santa Cruz.

“Maybe he does have a shot. He’s [Santa Cruz] is probably too small, and Gervonta is too strong. It sucks that we’re always talking about the next fight. We need to see that in this fight,” said Coppinger.