By Kenneth Friedman: Shakur Stevenson is poised to vacate his WBO 126-pound title so that he can move up to 130 and go after the belts in that division. The 23-year-old Stevenson (14-0, 8 KOs) has only had the WBO featherweight title for the last nine months since winning the vacant belt against fringe contender Joet Gonzalez.

Shakur didn’t have to face one of the lions at 126 like Gary Russell Jr for the vacant World Boxing Organization 126lb title. That’s one area that Stevenson is criticized because he didn’t beat anyone good to win his title, and now he’s vacating it without every having defended the belt.

In Stevenson’s last fight, he moved up to 130 and defeated lower level fighter Felix Caraballo by a sixth-round stoppage in June of this year. Boxing fans felt that Stevenson should have stayed around the featherweight division long enough to take on the dangerous guys like Russell Jr, Jessie Magdaleno, and Emanuel Navarrete [after he moves up].

Shakur had planned on facing IBF featherweight champ Josh Warrington in a unification fight this year, but the pandemic dashed those plans. Moreover, Warrington was dragging his feet when it came to taking the Stevenson fight. While Josh was doing a lot of talking about wanting to fight Stevenson, he tried to face WBA secondary champion Can Xu first.

It would have required Stevenson to wait around for him to get a shot at facing Warrington eventually, and it just wasn’t worth it. Warrington isn’t a big name in the States, and it wouldn’t have done anything for Shakur’s career to face him.

“We’re moving on up. We’re getting all the belts, and everyone at 130 [pounds] can get it,” said Stevenson’s co-promoter Antonio Leonard to ESPN.com.

Stevenson will need to raise his game considerably for him to beat WBC super featherweight champion Miguel Berchelt, as he’s got the power to give him problems. Most boxing fans view Berchelt as the best fighter in the 130-lb division now that Vasily Lomachenko is gone.

Once Berchelt faces Oscar Valdez, he’ll cement the fact that he’s the best in the division. Shakur may be hitting off more than he can chew in going after the big dogs at super-featherweight. If Berchelt doesn’t beat Stevenson, then Vasiliy Lomachenko surely will. 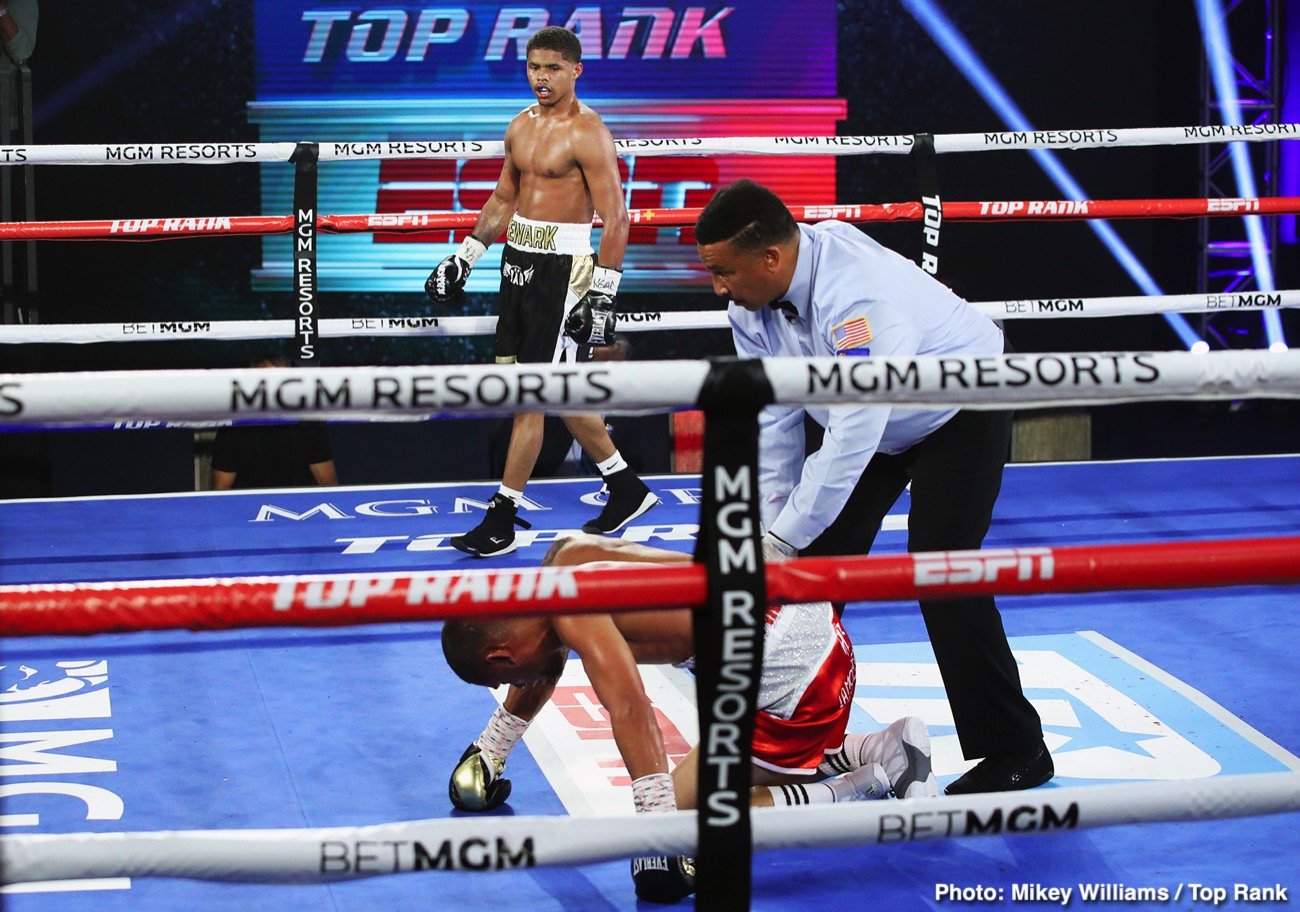 Top Rank can quickly put together a fight between Shakur and Berchelt, given that they promote both guys. It would be a good idea for Bob Arum to hold off a while before he lets Stevenson face. He needs experience before taking on the WBC champion.

The guy that Stevenson wants to fight is WBA super featherweight champion Leo Santa Cruz, but he’s going to need to wait on that fight. Santa Cruz will be looking to face Gervonta ‘Tank’ Davis on pay-per-view, and he’s not going to look in the direction of Stevenson until he’s done with that fight.

“I want Leo Santa Cruz,” Stevenson said to ESPN.com. “But I really want Santa Cruz. They know I’m coming for them. They see I’m on the way.”

Santa Cruz would be a hard fight as well for Stevenson, and he may have too much experience for him.

It would be better for Top Rank to start Stevenson slowly after he moves up to 130 by letting him fight WBO champion, Jamel Herring, first. That’s a winnable fight for Stevenson, and it would give him a chance to get a feel for what the division is like before taking on the talented guys.

Oscar Valdez would be an excellent option for Shakur as well, but Bob Arum has plans for him to put him in with Berchelt. 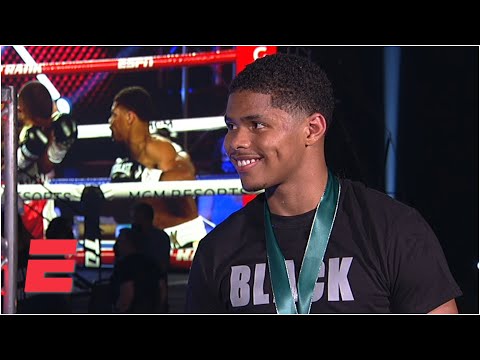 Shakur talks about getting dominated by Terence

“The one time I did get beat up was against Terence Crawford when I was younger,” said Shakur Stevenson on social media. “Bud f***** me up. I was 18, and talking the most s***.

“Terence Crawford is a world champion; I don’t care about that. The next thing you know, I went up there in that ring. I’m trying to do my thing at first, feeling real tough and confident. Two minutes into the round, I started feeling the man strength, and I was a kid at that the time. 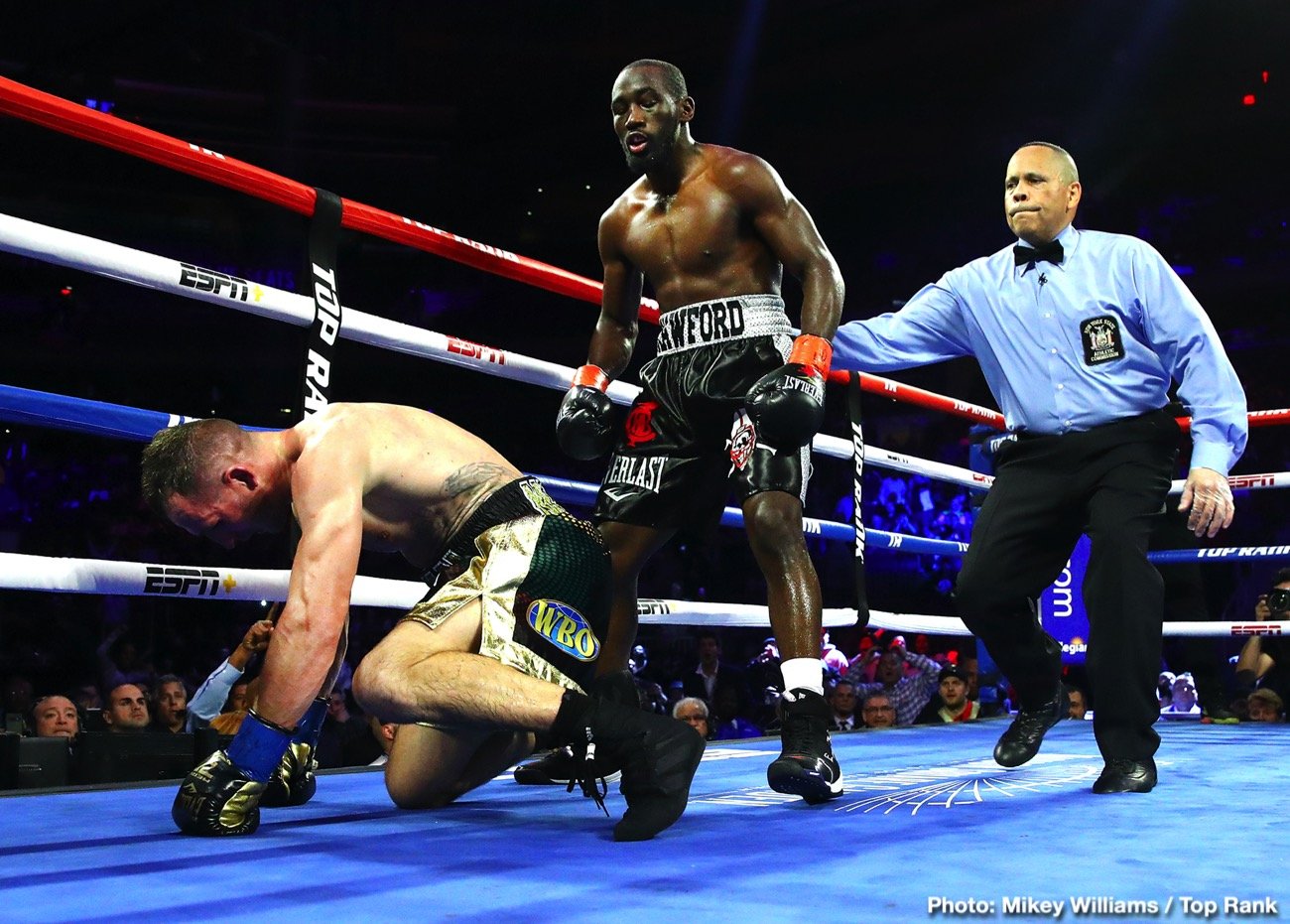 “He didn’t beat me up like he could have. And he could have f**** me up, but he started punching my arms. He saw me locking up, and he was breaking my arms. The next day I went to spar, and my arms and shoulders were f**** up. That was the only time that they got off on me. He really got off,” said Stevenson.

What Shakur isn’t saying is that Terence Crawford is probably still getting the better of him in sparring now four years later. Crawford is more prominent, more reliable, and a better combination puncher than Shakur.

If Stevenson eventually moves up to 147 one of these days, then maybe he and Crawford can fight. However, Crawford will likely be old and gray by the time Stevenson moves up another three divisions.

If Crawford moved up 20 pounds and took on a top super middleweight like David Benavidez or Canelo Alvarez, he would have a lot of problems with their size and power.

Crawford put Stevenson in his place

“I can sit here and say Bud got off,” continued Stevenson about Crawford getting the better of him in sparring. “He did some s*** that day. I’m going to keep it a whole 100. I was talking the most s***. I was 18. And I watched Bud on TV. I was learning from him at that time.

“I was on cloud nine. Nobody could beat me in my brain. I spar Bud all the time now. That’s one of my main sparring, as far as learning and being with someone at my type of level.

“They can’t do nothing to you. You can do whatever you want in there, and then you’ve got a world-class pro like Terence Crawford. That’s an elite-level pro. It’s a whole different ball game.

“I’m talking about Terence Crawford. Me sparring him back in the day, and he got off. Other than that, no one has got off on me in sparring. I’ve sparred the best of them. I’ve been in the ring with all of them,” said Shakur Stevenson.

What did Stevenson expect would happen when he fought then 140-pounder Crawford four years ago? In the Olympics in 2016, Stevenson fought at 56kg (123), and he wasn’t going to be big enough to compete against Crawford, who basically was  147-pounder when he was still competing at 140.


« Carl Frampton to fight on August 15