Sam Eggington: ‘I think it’s a fight I definitely win and I think I win before the twelfth bell’ 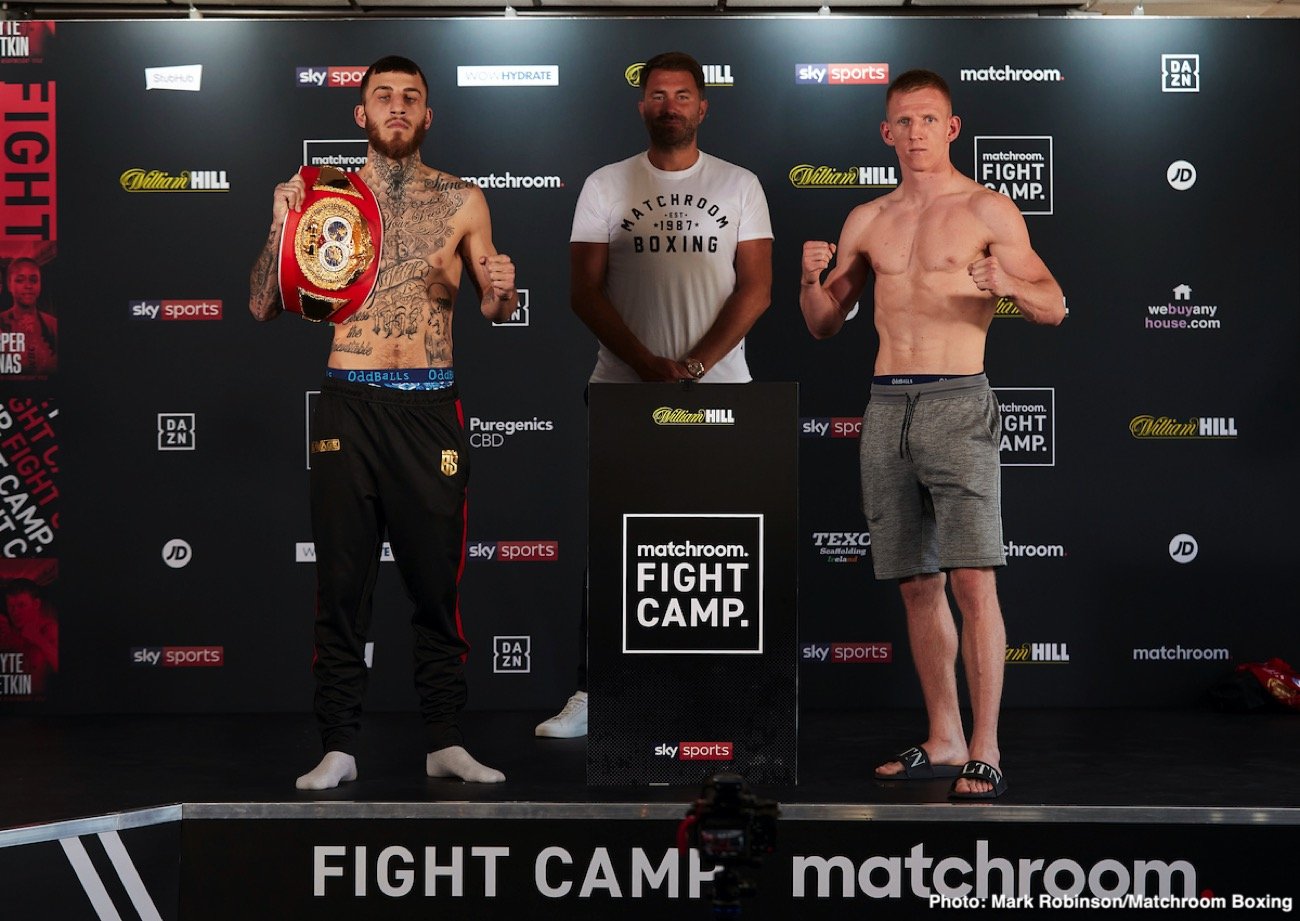 EXCLUSIVE interview by Ian Aldous: As Matchroom Boxing return to the sport with their exciting Fight Camp series this Saturday night, headlining duties for an historic outdoor fight night have been entrusted to two of Matchroom’s most entertaining fighters. Sam Eggington (28-6) will face Ted Cheeseman (15-2-1) in a battle neither can afford to lose. Both super-welterweights have tasted defeat previously, but a loss on Saturday night will scupper any immediate plans of moving upwards.

At just twenty-six years of age but with thirty-four professional fights under his belt, Eggington and his trainer, Jon Pegg are veterans of the domestic scene. His experience belies his age in fighting terms and it is experience he’ll likely use to his advantage when the first bell tolls. “I don’t think it will be an easy fight. But, I think it’s a fight I definitely win and I think I win before the twelfth bell,” Eggington confidently reveals. “If you look at the styles, it only bodes to be a good, hard fight. It’s well worth a watch. I’m saying that and I’m not even on PPV money (laughs).”

Throughout the recent pandemic and the sport’s slow rise back to action, Eggington was ticking over and keeping himself ready, willing and able to fight when summoned. “I put a tweet out saying: ‘When boxing’s ready to be back – I’m ready to be back’. Give me a bearable time to make weight, past that, everything’s ready to go. Within ten minutes, Eddie Hearn was on the phone. He sent my coach and manager (Jon Pegg) a list of names. Ted Cheeseman was on it. My manager liked it and that’s what we went for.”

Considering the shocking admission that Eggington only ever planned on being a journeyman when he first donned a pair of gloves, it’s stunning to see how much he’s already achieved. British, Commonwealth and European titles have all been worn around the Midlander’s waist. Stopping two-weight world champion, Paulie Malignaggi and local rival, Frankie Gavin are nights he’ll never forget. “Malignaggi was a great week; it was a PPV week (on the Bellew vs. Haye undercard). It was all something new. I’ve been telling other people: this is just a job to me and I wish I could go back and just enjoy it a bit more,” he reflected. “The night I fought Malignaggi, I fought and within an hour I was on the motorway going home. I wish I’d just sat back and enjoyed it a bit more. Malignaggi: there was no secret he was old, but I think my best night has got to be the (Frankie) Gavin fight. Nothing can beat a (local) derby and it really was 50/50, the crowd, the fight. I’m the underdog going in. He’d beat (Bradley) Skeete, Skeete beat me. Everything played for a good fight and to come out on top in that one was hard to beat, if I’m honest.”

Eggington was riding the crest of a wave and achieving accolades that no-one, not even himself, thought he would attain when he turned pro. In the first defence of his European welterweight title back in 2017, all momentum was lost when he was outpointed by Mohamed Mimoune. It was clear that making weight was becoming an issue he could ignore no longer. “I think a lot of it was just the relentless pressure of making weight,” he admitted. “As soon as I get out the ring in one fight; let’s say I fought in the August, Eddie Hearn would be saying: ‘You’re back out in November’. By the time I got home I was back on the diet. I done 45 minutes down the motorway and it was diet time again. It was a tedious time and I think it got to me a bit. It was getting a struggle and harder to stick to the diet, harder not to cheat. It was so hard to make the weight with how I was living. I was training hard, don’t get me wrong. To make the weight at that time, I can’t exaggerate enough how bad it was (laughs). I was crying, I was like a baby – it was dreadful.”

Just under a year later, an unexpected second-round stoppage loss up at super-welterweight to the unheralded Hassan Mwakinyo ground his career to a juddering halt. At just twenty-four years-old; he’d been discarded to the British boxing scrapheap. Fast-forward another year and a bout with Italian Orlando Fiordigiglio in Florence was expected to be the final time we’d see Eggington in a high-profile main-event. “The Italians had rung up and said: ‘Is there any chance we can get Sam?’. They could have offered me the plane fare and I’d have went over and done the job. It was just an opportunity I couldn’t turn down. To fight in someone else’s country, top of the bill, it was brilliant.”

He proceeded to knock out the highly-ranked Italian in the second-round to not only stun the crowd in attendance into silence – but those watching on TV who’d written him off. The popular Brummie was back and beating Fiordigiglio for his IBF International title was enough to lift him straight into the IBF rankings. Could an unlikely clash with IBF & WBA World super-welterweight champion, Jeison Rosario lay on the horizon in the not-too-distant future? “There’s been a final eliminator (Bakhram Murtazaliev beat Jorge Fortea) already fought for the IBF (title), so if he wants to fight (Jermell) Charlo and earn the big bucks – he’ll have to vacate the IBF?”

It’s distinctly possible that some step-aside money may have been forwarded to Murtazaliev, but Rosario will have to face the IBF’s #1 contender at some point soon. If not, Eggington will be keeping a close eye on how the situation pans out.

He concluded: “If it goes vacant or anything like that, being ranked fifth with a defence (of his IBF International strap) against Cheeseman really puts me in (with a) shout.”

Write off Sam Eggington at your peril.