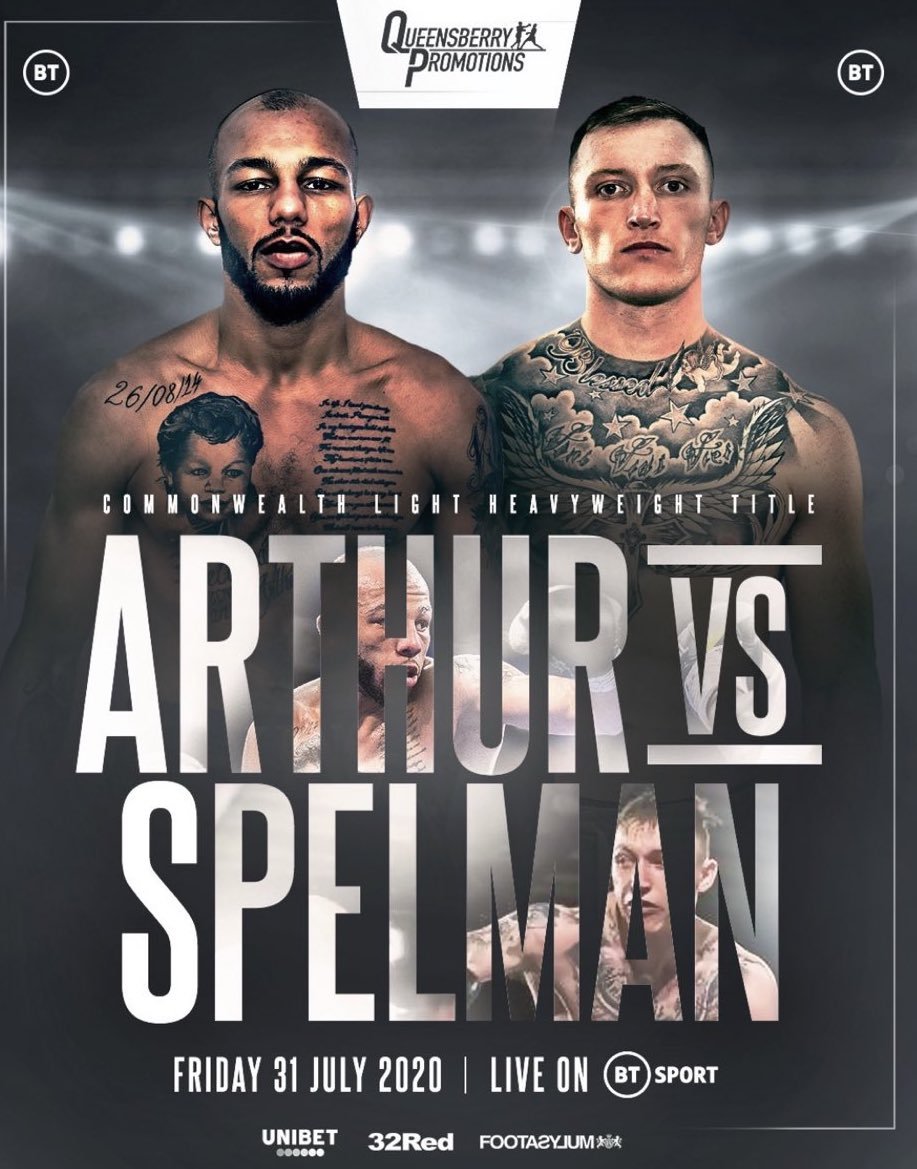 LYNDON ARTHUR is focused on knocking out Dec Spelman before getting to grips with Anthony Yarde.

The Mancunian makes the first defence of his Commonwealth Light-Heavyweight championship against Spelman (16-3, 8KOs) on Friday July 31 In the third instalment of Frank Warren’s summer series.

Scunthorpe’s Spelman is one of the toughest 12st 7lb men in Britain and it will be a big ask for Arthur (16-0, 12KOs) to end his challenge inside 12 rounds.

Arthur, 29, hasn’t boxed since last October when he claimed his title by outpointing Ghana’s Emmanuel Anim, who he floored in round four.

Lyndon said: “Dec might have lost a couple of fights, but he leaves it in there and is a tough, come forward fighter, can take a shot and could be in there for the long haul.

“He is rock solid, but he hasn’t been hit off me. He hasn’t been in with anyone who hits as hard as I do. I am looking to knock him out.

“The Anim fight ticked so many boxes for me. I know I am fit and can do 12 rounds without a problem.

“Anyone I had hit before that fight hadn’t got up, but him getting up and pushing me for 12 rounds was a good experience.

“It was nice to get in there with someone who can give me a good fight after being hurt. I adapted well to that situation.

“If I drop Dec and he gets up and pushes me 12 rounds there won’t be any shock on my part this time.

“Boxing behind closed doors will be like an intense spar with little gloves on, trying to knock each other out.”

Arthur had been due to face Yarde this month in a mouthwatering clash, but the coronavirus crisis has forced a delay.

“Not to fight Yarde in July was initially a blow.” said Arthur.

“I have not fought since October last year so it will be good to get out before the Yarde fight.”

Spelman, 28, won the English title last May when he defeated Kirk Garvey, but Shakan Pitters snatched the crown from him back in September.

He knows this a chance to wreck Arthur’s date with Yarde and book himself that fight later this year.

“The chance of fighting Yarde is driving me on massively,” roared Spelman who combines boxing with his day job as a scaffolder.

“Lyndon has the Yarde fight hanging over him, but if I win then I could get that fight and make life-changing money.

“Lyndon has power, but he is also elusive. I am not stupid enough to think I can outbox him.

“I have got to get in his face, rough him up, use my strength. I can whack a bit as well.

“He knows what I am going to do. I am going to meet him in the middle and we will see who comes on top. This fight is a potential banana skin for him.”

Heading up the show is the tasty looking light heavyweight collision between Lyndon Arthur and Dec Spelman with the Commonwealth title at stake in a fight where sparks are certain to fly.

Agyarko and Smith coming together is also a combustible cocktail containing mostly pure aggression and come forward intent from both fighters.

Agyarko (6-0), known as Black Thunder, recognises this domestic dust-up as his first big test, while Smith (11-1-1) acknowledges this is his time to shine in stepping up to middleweight for a golden opportunity to kickstart his career.

“He has never fought at middleweight before, but he carries a bit of power for a welterweight and has five stoppages from his 11 wins. I’ll not be taking anything for granted. Regardless of whether he is a welterweight or not, I am taking it as my toughest fight to date and I am going to put on a good performance.

“Obviously I would have preferred a middleweight with a good record but nobody wanted to step up to the plate at this moment in time. Fair play to Jez for taking this fight and I am sure he will be out to prove everybody wrong and cause an upset.

“This is a stepping stone for me, a domestic dust-up and what I’ve been calling for. I am looking forward to getting the job done and moving on to bigger and better things.”

Smith, from Harrow, is undaunted by the mission of stepping up in weight and views the fight as his potential passport back to the big stage he operated on during his prospect phase.

“I’d been preparing for a fight in Belarus and working hard, but I didn’t know what was going on with travel quarantine,” said Smith, the younger brother of former WBO European champion Mitchell. “So I put my name out there in case anything came up and then I got a message from my trainer saying we’ve been offered a fight at middleweight.

“I was going to fight between light middle and middle in Belarus so I said to myself it is just an extra few pounds and I believe I am big enough. To be honest with you, I look at Agyarko and I don’t think he is a middleweight.

“I believe he is not massive at the weight and, if he wanted to, he could do a lower weight. He is quite chunky but it doesn’t faze me and I believe I am strong enough and I spar bigger lads all the time.

“I can fight, I can box and, I’ll tell you one thing for sure, I am not coming in as a body. I am coming to win and he is going to get a tough night’s work.

“It is a massive opportunity for me. It is on BT Sport and if I put on a massive performance and turn him over it opens up a huge door for me.

“I am not saying I am going to fight at middleweight from now on, it is just a fight I believe I hold my own in. I believe I can win. I am not being unrealistic because I don’t think he is a world-beater. I’ve watched him and he is a good fighter, but I am believe I am too and I can’t wait to get in there.

“If people go off my last performance then more fool them.”

Also featuring on the card is the exciting Liverpool trio of Nick Ball, Andrew Cain and Brad Strand from the Everton Red Triangle gym. 11-0 featherweight Ball takes on the 6-0 Jerome Campbell from Kingsbury.

Arthur vs Spelman Live coverage on BT Sport 1 begins at 7pm on Friday.