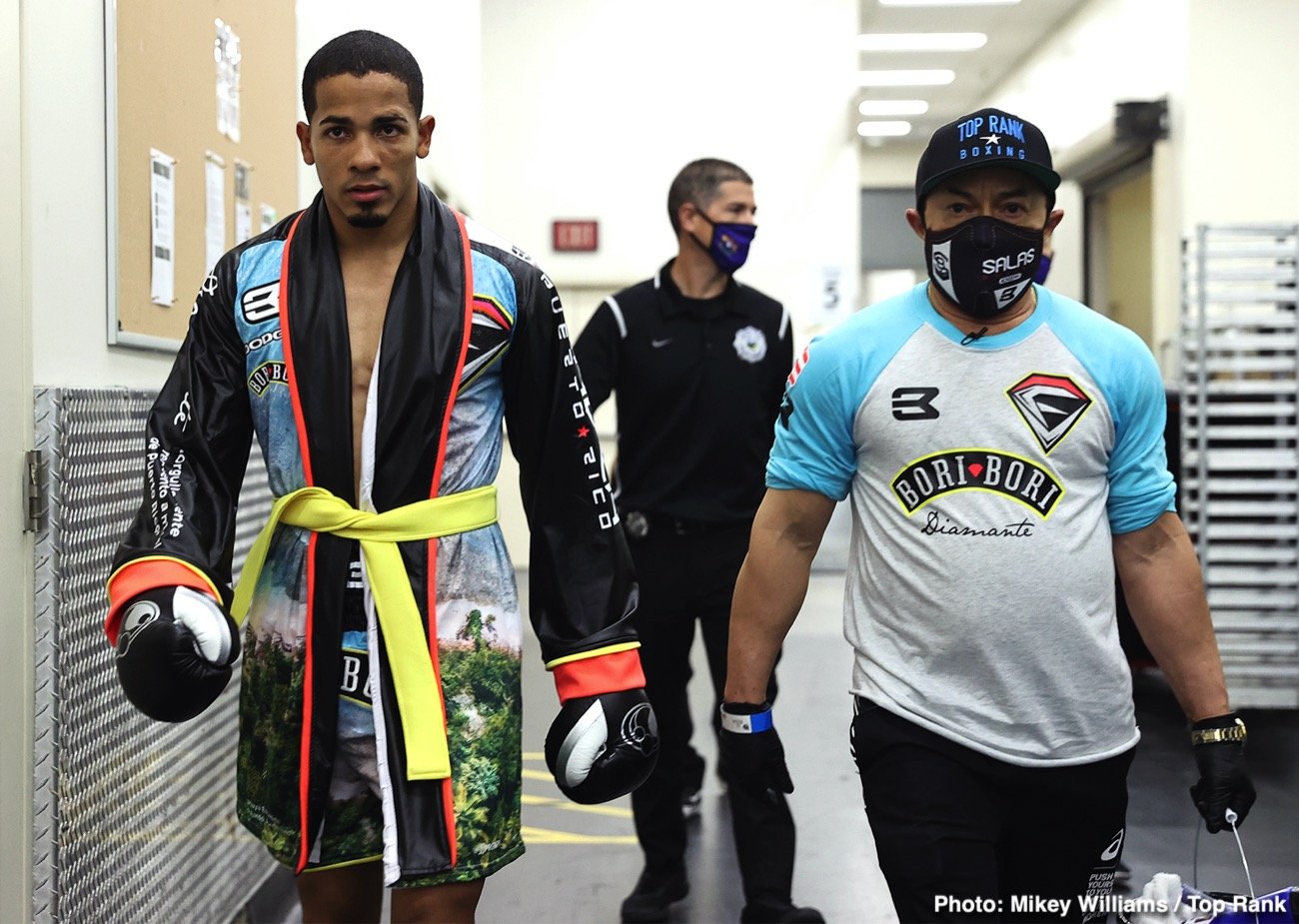 Top Rank promotes both ‘Hi-Tech’ Lomachenko (14-1, 10 KOs) and ‘El Diamante’ Verdejo, so it’s a fight that can be made quickly by promoter Bob Arum if he’s inclined to make that move. However, Lomachenko has bigger fish to fry with his relatively scheduled October 3 unification match against IBF 135lb champion Teofimo Lopez (15-0, 12 KOs).

That’s the fight that Lomachenko wants, and that’s the match-up that the boxing public wants to see right now. 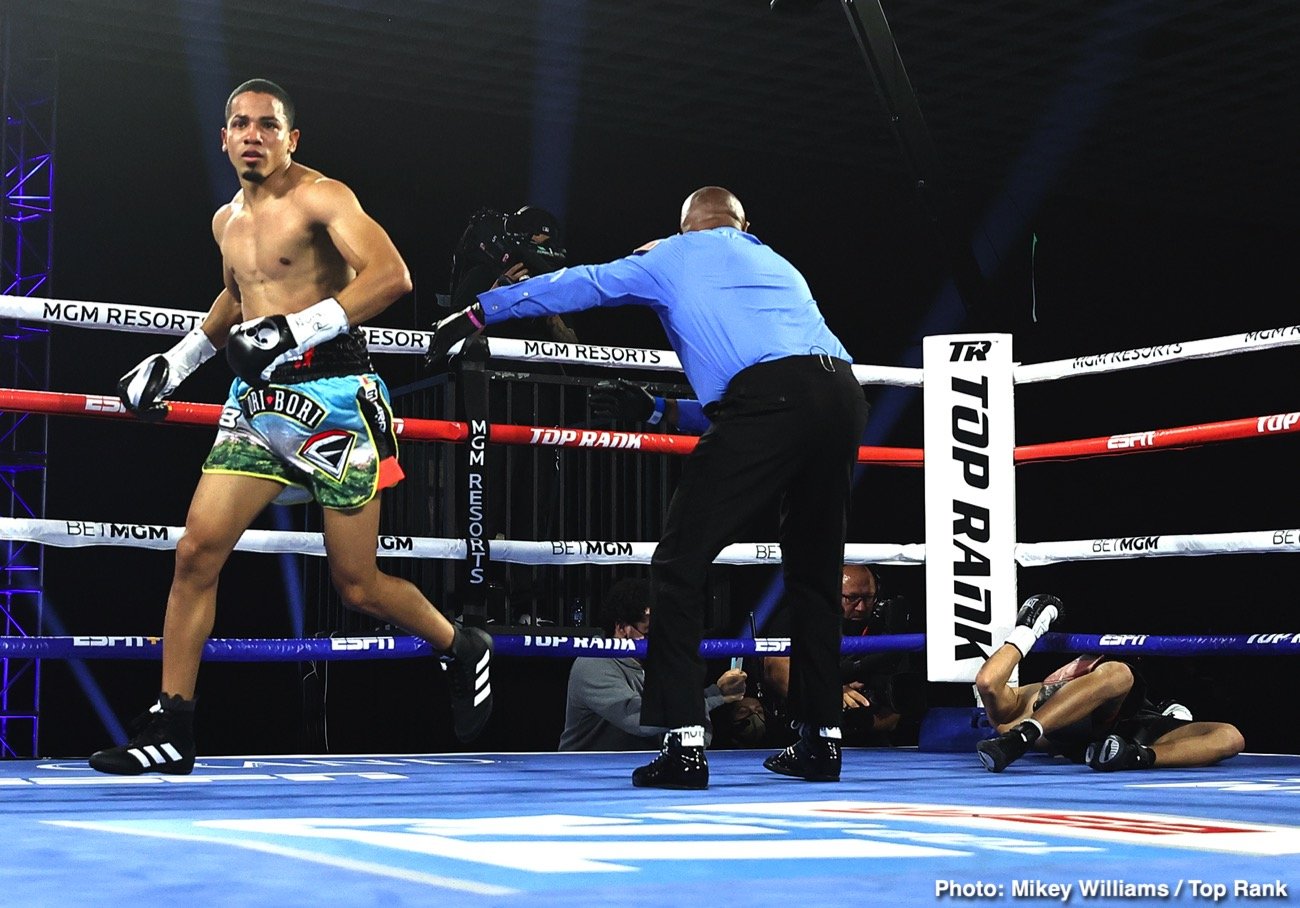 While Verdejo did look sensational in stopping Madera, he didn’t prove that he’s entirely back from his knockout loss from 2018. It wouldn’t be fair to Top Rank or the boxing public for Verdejo to waste people’s time by taking on a talented fighter like Lomachenko.

There are levels in this sport. Lomachenko is at the top while Verdejo is rightfully at the bottom at #15 with the WBC. That’s a ranking that makes sense given Verdejo’s defeat to Torres in 2017.

Verdejo has unfinished business with the Ukrainian Lomachenko, having lost to him by a 14-9 score in the 2012 Summer Olympics in London, England. The two-time Olympic gold medalist Lomachenko was too quick and elusive for Verdejo in their fight eight years ago, and the scores should have been more comprehensive.

Verdejo couldn’t land anything in the contest, and the judges gave him a lot of mercy points in that fight that he didn’t deserve.

“Stay ready because Felix Verdejo is back,” said Verdejo to ESPN following his first-round knockout of Will Madera. “I’m ready to fight against the best. We [Lomachenko] have unfinished business,” Verdejo said.

It would be crazy for Top Rank to throw the 27-year-old Verdejo in the ring with Lomachenko at this point because the outcome would be visible. Moreover, the boxing public would be angry with all the fake hype that would be part of the build-up to the Lomachenko vs. Verdejo match.

It’s far better for Top Rank to keep Verdejo busy for the next 10+ fights to make sure that he’s improved his game and is ready to take on the best like Lomachenko. It’s doubtful that Lomachenko will still be fighting at 135 by the time Verdejo is prepared to challenge him for his titles.

Loma will be moving back down to 130 after his match against Teofimo this October, and he’s not likely to return to the 135 -pound division unless it was for a big fight against the likes of Devin Haney, Gervonta Davis or Ryan Garcia.

As for last night’s fight, Madera didn’t look too bad in the first two minutes of the round against Verdejo. Madera was landing shots and looking like he was on the same level as Verdejo. However, things fell apart for Madera after Verdejo hurt him with a booming right-hand uppercut in the last 30 seconds of the round.

The shot shook Madera to his boots, and his legs went immediately to jelly. Smelling blood in the water, the shark-like Verdejo followed with another big uppercut that caused Madera to flee to the corner for the last stand.

Verdejo then buried Madera with a mini flurry of punches that ended with a left hand that sent him down on the canvas in the corner. The fight was then stopped.

Referee Robert Hoyle took one look at Madera’s condition and immediately halted the contest. Madera gave Hoyle a stunned look as if to say, ‘Why did you stop it?’

The drunken appearance that Madera was reason enough for Hoyle to stop the bout. Madera wasn’t going to be able to recover from the knockdown anytime soon for him to resume fighting.

“I took my time, I really came out here settled,” Verdejo said. “I wanted to measure what he came out with, and how hard he hit.

“Once I figured that out, I did it. I just let my hands go — but always under control, and that knockout came.”

What made it easy for Verdejo is the fact that Madera wasn’t throwing many punches, and that allowed him to take over. Verdejo had a much tougher time when he lost to Tijuana, Mexico native Antonio Lozada Torres in 2017. Unlike Madera, the tough 6’0″ Torres had a chin and was able to take Verdejo’s power shots.

Torres took Verdejo’s best shots and then kept firing back with his own. In the seventh and eighth rounds, Verdejo was in severe distress and repeatedly hurt by the powerful Mexican fighter.

In the end, Torres was hitting Verdejo at will with power shots, and batting him around the ring like he was baseball. Verdejo’s corner should have pulled him out rather than waiting for the inevitable knockout.

Verdejo can call out Lomachenko all he wants, but he has to avenge his loss to Torres for him to be taken seriously.

The fact that Verdejo isn’t even attempting to set up a rematch with Torres is telling. Verdejo’s self-confidence might not be what it needs to be for him to take on the tough Mexican fighter Torres a second time.