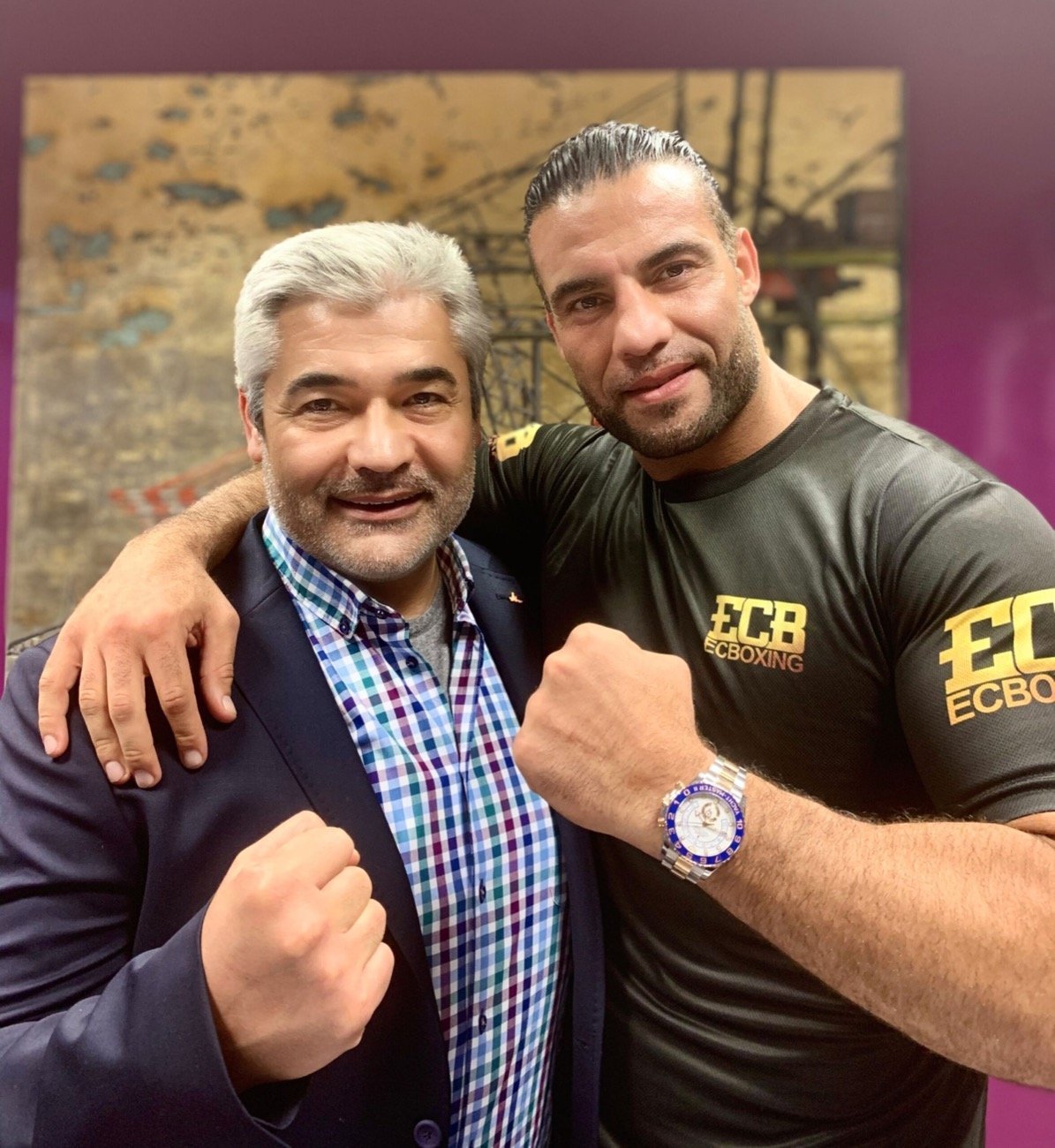 17th of July 2020 – EC Boxing’s newly signed Heayvweight Mahmoud Charr has made it clear once again that he is willing to fight the big names of the division. In recent social media posts he offered non-other than former World Champion Andy Ruiz Jr. to fight him for his WBA World Title: „Andy Ruiz – I give you the opportunity to become World Champion again. Accept my challenge and do not hide behind your manager or promoter. Be a man and fight me, I’ll come to the US or Mexiko, I guarantee you that this will be a real battle.“

With Promoter Erol Ceylan from Hamburg, Germany at his side, fights of that scale have become possible for Charr, who’s been eagerly awaiting his return to the ring. Ceylan, who started EC Boxing a decade ago, has made a name for himself in the business. Apart from Charr, well-known boxers such as Christian Hammer, IBO Welterweight Champion Sebastian Formella or Light Heayvweight contender Igor Mikhalkin are part of his stable. Ceylan wants his new client to be involved in massive events: „Mahmoud wants to fight everyone and we are willing to negotiate with everyone. It’s time for a big Heavyweight showdown.“

Ruiz, who recently aligned himself with highly-rated Canelo trainer Eddy Reynoso, would be a huge task for the man from Cologne, but big challenges are nothing new for him. He fought both Vitali Klitschko and Alexander Povetkin in Moscow, as well as other relevant names in the division. He never turned down a dangerous fight. And while Charr is preparing for battle, Erol Ceylan is doing everything in his power to get them done.

Boxing promoter Erol Ceylan has signed WBA Heavyweight Champion Mahmoud Charr to a longterm contract in Hamburg. Charr has held the title since 2017 and has won 31 of his 35 fights as a professional.

Two old friends have finally reunited: Boxing promoter Erol Ceylan from Hamburg and WBA World Champion Mahmoud Charr from Cologne. Both have now signed a long-term contract in Hamburg, with the aim that Charr will defend his WBA Heavyweight belt as soon as possible. Many unfortunate circumstances have prevented Charr from defending his title since 2017, but this should now be over: “I am sure that Erol, with his close ties to US promoters, is the right partner at my side. I would like to fight Andy Ruiz and then target Tyson Fury,” Charr said to www.boxen.co.

Erol Ceylan from EC Boxing is also very exited about this new partnership: “Mahmoud was and always will be a part of the ECB family. We are currently restructuring our stable and looking for new strategies moving forward. After signing Ukrainian heavyweight Victor Faust, we now also have a reigning Heavyweight World Champion in Mahmoud. We are in a good position, and I am convinced that he soon will be involved in massive fights.”

With Charr and IBO Welterweight Champ Sebastian Formella, Ceylan is now the only promoter in Germany who has two World Champions under contract. On top of that he works with a plethora of other heavyweights. Besides Charr and Faust, proven contenders such as former Fury-foe Christian Hammer, Turkish Boxer Ali Eren Demirezen and former European Champion Erkan Teper are part of his big stable. Just like the World Champions of the team they are ready to take on all comers.

Mahmoud Charr and his family fled to Germany when he was still a child. In his early 20s, after a short amateur career, he entered the professional game, where he worked with legendary Sauerland coach Ulli Wegner among others. Bit by bit he climbed the rankings, before fulfilling a lifelong dream in 2012, when he faced Vitali Klitschko for the WBC World Championship in Moscow. In the end only a cut to his eye could stop Charr, who gave a courageous effort and fought his heart out. The controversial stoppage is causing heated debates to this day.

In the following years, the almost 6 foot 4 inches tall man entered the ring against various wellknown faces in the boxing world – often outside of Germany. Particularly in Russia, he earned himself the reputation of a fighter who never ducks a challenge. With Alexander Povetkin, Alex Leapai, Johann Duhaupas, Michael Grant, Kevin Johnson, and Mairis Briedis, Charr has faced various reigning or former World Champions or World Championship challengers. In 2017, more than a decade after the start of his career, he finally got another chance to win a World Championship belt. In the König Pilsener Arena in Oberhausen, Germany, Charr outpointed Alexander Ustinov and won the WBA Title. Now with Ceylan at his side, Charr is ready to add new chapters to his extraordinary story.

Boxing On DAZN Returns In One Week Featuring Ortiz Jr. vs Vargas on July 24 »