Derevyanchenko: Canelo or Charlo, either will do 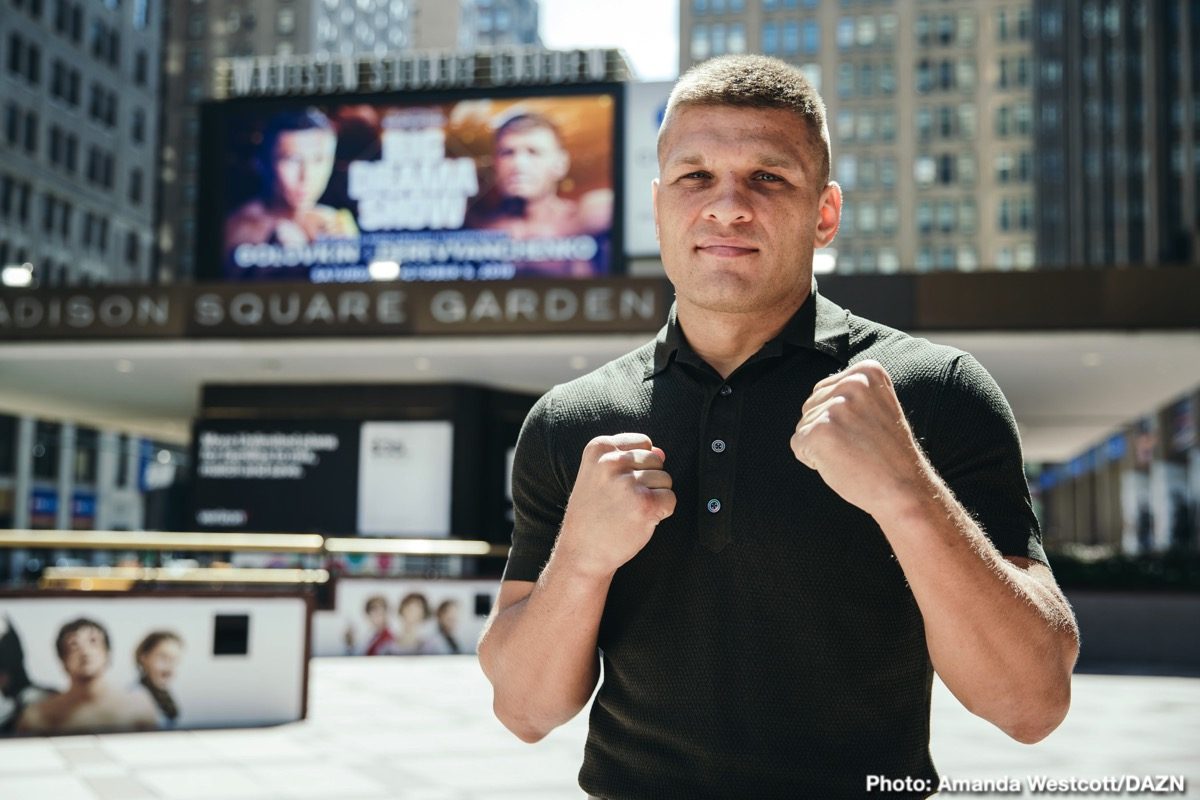 By Sean Jones: Sergiy Dervyanchenko and trainer Andre Rozier have no preference in who they get next between Canelo Alvarez and Jermall Charlo. They’ll take either of those two world champions.

It’s going to be tough for Derevyanchenko to turn down the fight against the 29-year-old Canelo because he’s the face of boxing. A win over Canelo will take Derevyanchenko’s career to the next level.

Derevyanchenko (13-2, 10 KOs) has been given offers from WBC middleweight champion Charlo’s management and WBA ‘regular’ 168-pound champion Canelo’s promoters. He still hasn’t made up his mind which of the two he’ll fight.

It’s believed that Derevyanchenko’s best chance of success is against Charlo (30-0, 22 KOs), seeing that he’s shown vulnerability recently against Matt Korobov. Canelo is a different story. He’s beatable, as we’ve seen in his two fights against Gennadiy Golovkin, but getting a decision is another matter. 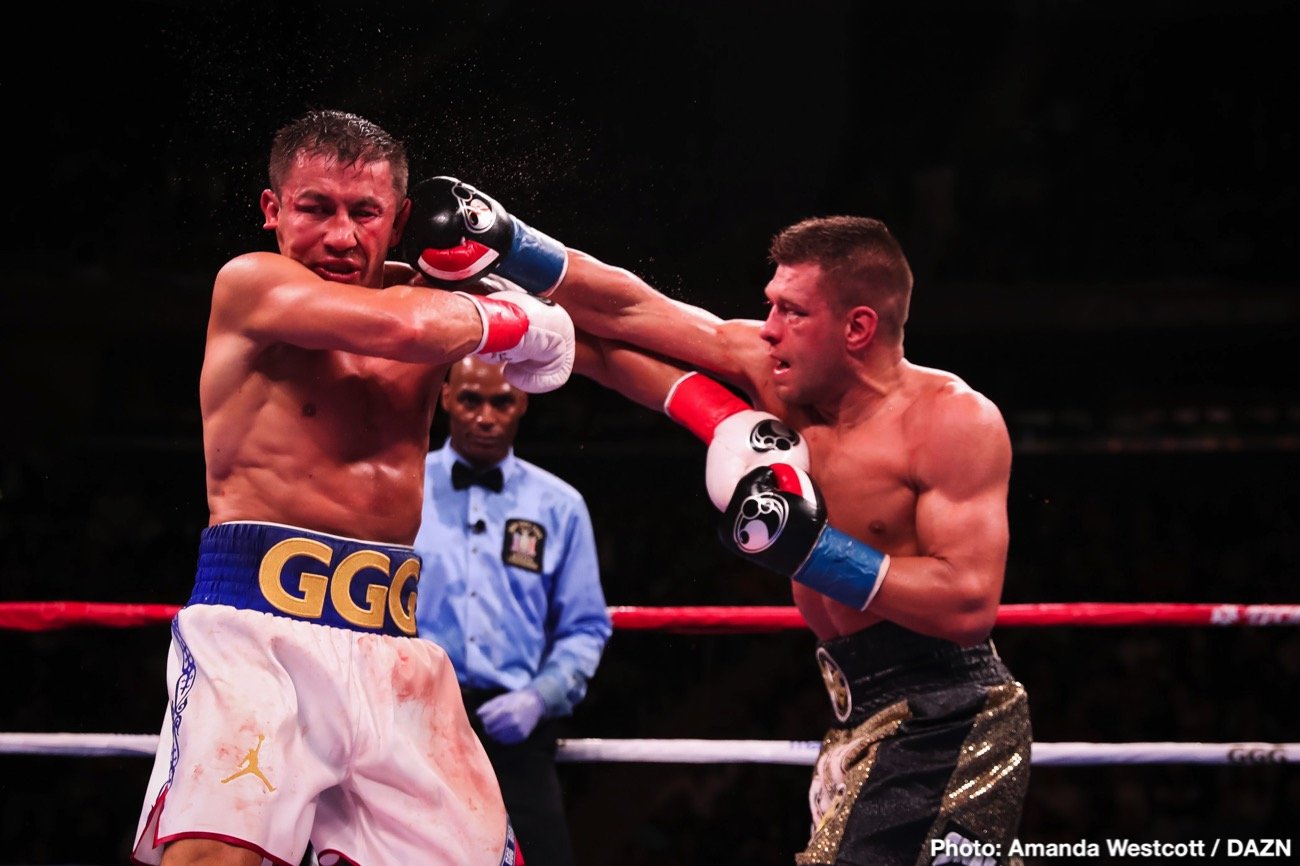 You can arguably beat Canelo, but that doesn’t mean the judges will give you the win. Derevyanchenko has already been up that street in his last fight against Golovkin, and he doesn’t want that to happen again.

Derevyanchenko fought well against GGG last October, and at the end of the fight, the boxing fans felt that he won the fight. The judges gave it to Golovkin, though, and that led to a firestorm of criticism by people.

Derevyanchenko came out of the Golovkin fight as seen as the uncrowned champion, and that’s why he’s in demand right now. Golovkin’s star has faded, whereas Derevyanchenko has skyrocketed.

Sergiy will be ready

“The only fire here is ‘The Technician’ is back, and he’s getting ready for anybody has,” said trainer Rozier to Fighthype about Derevyanchenko. “We’re doing what we have to do to get ready for any assignments we have to do.

“It’s just a matter of time what we want to do, but we will be ready for everything. This man doesn’t care,” said Rozier when asked if Derevyanchenko would have a problem facing Canelo Alvarez. “He fought GGG, and he beat GGG. He fought Danny Jacobs.

“It was a close fight. I thought it was a draw, in my opinion. He doesn’t even complain. When we whooped GGG’s butt, Sergiy said, ‘It’s OK, coach. It’ll be alright. We’ll always have another chance.’ It doesn’t matter,” said Rozier when asked which of the two, Canelo or Jermall Charlo, would be more difficult for Derevyanchenko.

“When you’re at this level, you have to be ready for anybody. You never know what you’re going to get on any night. This might be the night where Canelo is down, and Charlo is up or vice versa. It depends on him,” said Rozier on Derevyanchenko.

Golovkin surprisingly chose not to give Derevyanchenko a rematch to clear up their controversy, and that’s the highest form of respect. With all the criticism Golovkin has taken over his controversial win over Derevyanchenko, he hurt his career by not fighting him again. It was a weak move on GGG’s part not to fight Derevyanchenko once more.

It means a lot that Rozier says that he thinks Derevyanchenko deserved a 12 round draw in his fight against Daniel Jacobs because he trains him as well. But that’s the opinion that a lot of boxing fans have about the Jacobs-Derevyanchenko fight. They saw it as a draw, and a lot of fans belt that Sergiy should have won.

“Our goal is to make him the best technician, and that’s why his nickname is ‘The Technician,'” Rozier continued about Derevyanchenko. “I want this young man to have a world championship. He’s the greatest fighter without a belt right now.

“This man has had opportunities, and he seems like he’s always been put on the short end of the stick. We’re going to go in there and take care of business against whoever it is.

“I’m not worried about anybody in the fight game because this man has made me confident. Canelo is a great kid. No attitude. I don’t know about Charlo. He’s acting like he’s matured a bit, but if he starts acting up, he can get the respect back.

Canelo is vulnerable to the body, and that’s a part of Derevyanchenko’s game that he’s good at. In his last fight against GGG, Derevyanchenko hurt him all night long with body shots, and it was impressive. The body attack that Derevyanchenko did against Golovkin was far superior to what Canelo did.

That’s why they call Derevyanchenko ‘The Technician.’ He uses a perfect form for whatever he does in the ring, and it’s clear that he learns the right way. He’s a fighter that can apply what he’s learned, and that makes him a dangerous fighter. He doesn’t forget to use things he’s been taught.

The future is his, and our goal is to make him a Hall of Fame fighter. We don’t care about that,” said Rozier when asked if Derevyanchenko is bothered fighting behind closed doors.

It’s a good idea for Derevyanchenko and Rozier not to give a preference for Charlo or Canelo. Once you do that, it closes the door potentially on one of those guys, and Derevyanchenko can’t afford to do that.

If Canelo chooses to go in another direction, then Derevyanchenko would need to take the Charlo fight. That’s why Rozier should say that they don’t have a preference.

If Dereyanchenko takes the fight with Canelo, he just needs to have his eyes wide open about what he’s stepping into. We’re talking about the battle taking place in Las Vegas, where Canelo is impossible to beat.

It will be a buzzkill for Derevyanchenko if he loses a second consecutive controversial decision. But on the flip side, his popularity will remain high because the boxing public will view the decision as a robbery.