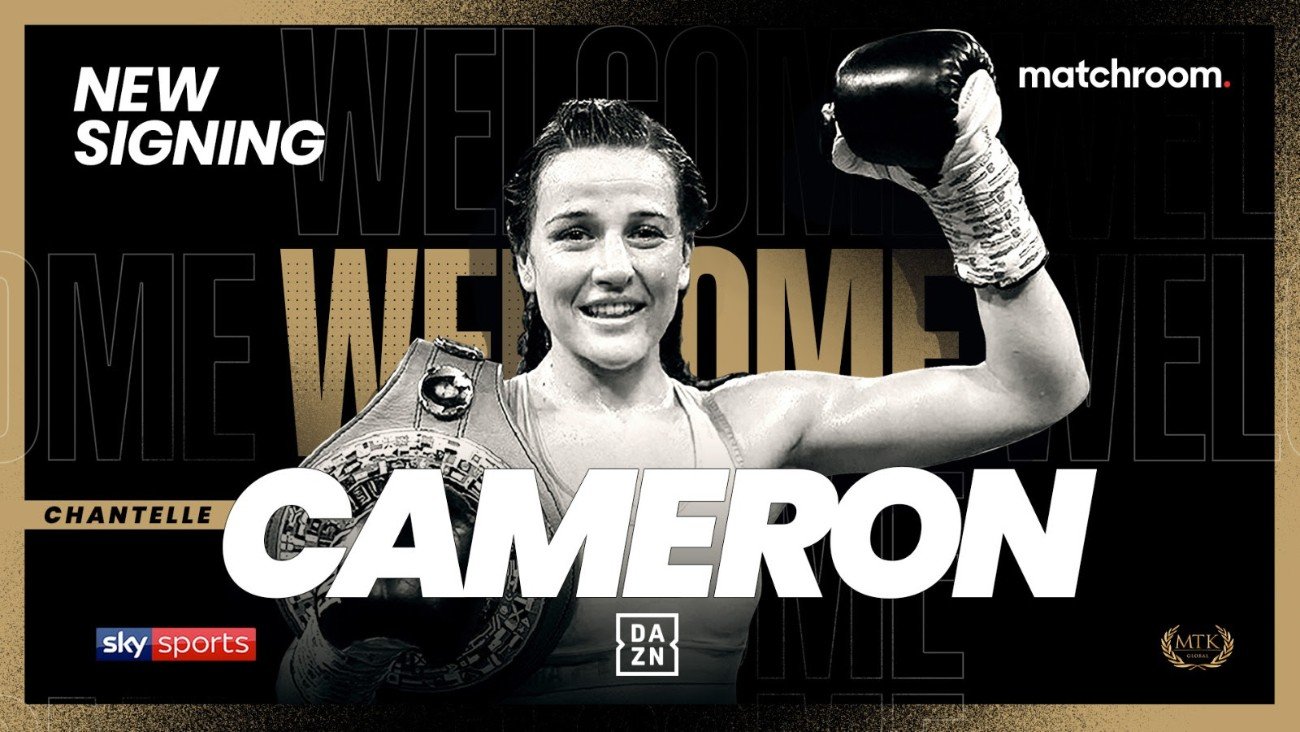 Trained by Jamie Moore at the VIP Gym in Asltey and managed by MTK Global, 29-year-old Cameron says a huge showdown with her idol Taylor is at the top of her wish list but she won’t put her career on hold waiting for it and is already targeting other opportunities.

“Matchroom and Sky are a huge platform,” said Cameron. “It’s always been in my sights and I’ve not had the chance until now to link-up, I can’t wait to get going. Day by day under Jamie and Nigel I’m improving but I’m still not the finished article. This time has allowed me to work in different areas I probably wouldn’t have focused on in proper training camp.

“I wasn’t expecting to become mandatory in two weights, it was a bit of a shock but I’m delighted with MTK and Jamie since we’ve all come together. The last two fights have been great matchmaking and now a World Title shot is not too far away either at Lightweight or Super-Lightweight.

“Before my first pro fight, people were asking me to fight Katie. I’m a massive fan, she’s a legend and I look up to her but at the same time I’m her Mandatory and I want that fight. That being said, I don’t want to be hanging around waiting – it could be years away, she has a fight lined up and is also talking about other fights.

“I want to win World Titles myself and can’t be sitting around waiting for that fight. As it stands, I’m not sure what the next move is given what’s happened with COVID-19 but I’ll be ready to go when the call comes. I’m looking to put on a good show for my Matchroom debut, first impressions last.”

“I’m delighted to welcome Chantelle Cameron to the team,” said Eddie Hearn. “I’ve been watching her closely over the last couple of years and she’s a huge talent – exciting, relentless, and punches very hard. I believe she is going to go on and become a multi-weight World Champion.

“Her next fight will be for a World Title and we’ll announce it in the next couple of weeks. Women’s boxing is on fire right now and I’m so excited to be a part of it and deliver huge nights on sky sports and DAZN.”

BALL – HOW WILL COURTENAY COPE WITH PRESSURE?

Walsall warrior open to Fight Camp “tear up” – Rachel Ball is preparing to give fight fans the “shock of their lives” when she takes on popular Watford prospect Shannon Courtenay over eight rounds on Week 3 of Matchroom Fight Camp in Brentwood, Essex on Friday August 14.

The three-time kickboxing World Champion racked up four wins on the bounce after switching to professional boxing in 2017, including a points win over Eftychia Kathopouli in an all-out war at the Banks’s Stadium that saw both fighters touch the canvas.

Her first loss came against current Interim WBC Super-Featherweight World Champion Katherina Thanderz last year when she travelled to Norway at short notice to take on the former European Champion over eight rounds in Arendal.

Despite Thanderz stepping in heavy on the scales, the fight went ahead and Ball pushed ‘Katy’ all the way in a close points loss. Having proved she can mix it with world level fighters, Ball has questioned how the relatively untested Courtenay will cope in her first real step up.

“Fans are going to have the shock of their lives,” said Ball. “They’re going to see a tall skinny ginger girl from Walsall coming in and smashing it up in Eddie’s back garden. I can’t wait and I think everyone is going to enjoy it. It’s going to be a brilliant fight.

Ball, the only woman to win the BBBofC Midlands Area Fight of the Year Award, heads into her showdown with Courtenay as the underdog with the bookies, a tag that she happily owns as she looks to announce herself on the big stage live on Sky Sports in the UK and DAZN in the US.

“A lot of people have me down as the underdog. I’m only the underdog because people don’t know me. It’s not a reflection of my skills or my ability to fight. I’m sure they’ll see that come fight night. The underdog tag spurs me on because I want to prove to people how good a fighter I am.

“As soon as the fight was announced and it was out with the bookies I had people putting money on me. People back at home have been betting on me. If I win, I’m going to be really popular on August 14th! Hopefully it will be a good pay day for everyone watching at home.”