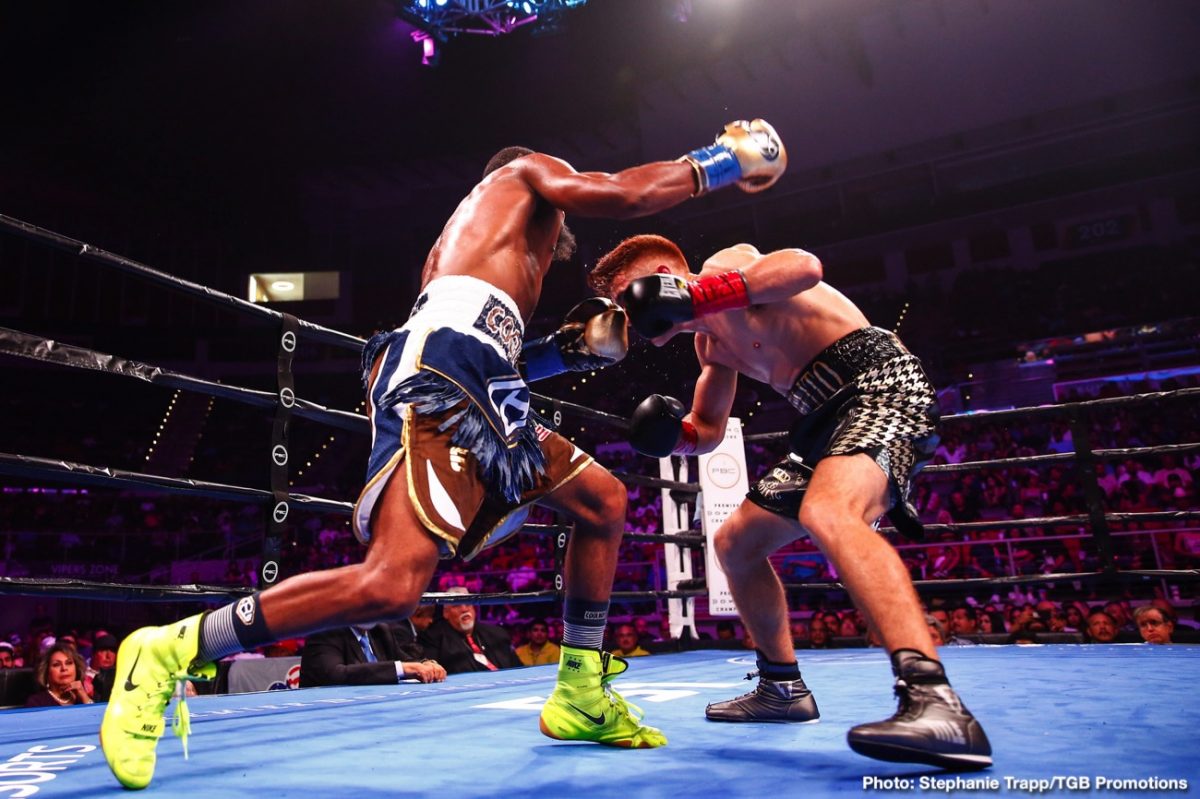 Boxing is back on SHOWTIME, and five fighters taking part in Saturday’s SHOWTIME CHAMPIONSHIP BOXING® tripleheader participated in a media availability on Wednesday to discuss the bouts Presented by Premier Boxing Champions and taking place at Mohegan Sun Arena in Uncasville, Conn.

Here is what the fighters had to say on today’s call. Due to a scheduling conflict, Fulton was unable to participate.

“This is something I’ve worked my whole life for, so my preparation has been the best I’ve ever had, both physically and mentally. This is the day I’ve been waiting for, and I have to seize the opportunity.

“Floyd was in the gym with me a couple of times, giving me pointers and helping work through my game plan. His wisdom, combined with my trainer’s knowledge, really meshed together for me. Floyd just told me to stay calm, treat it like any other fight and do what I do best. I know the mental strength that Floyd has, and I’ve learned from it. I’ve learned from the best.

“I expect to be able to hurt Fulton. He talks a lot about how he’s fought a lot of undefeated fighters, but if you look closely, he’s been hurt before. I just want to make that point clear that he’s not untouchable.

“This would be a great win for my hometown of Albuquerque. We haven’t had a champion since Johnny Tapia, and to become a champion after him would mean a great deal to me and the city.

“It’s possible he’s overconfident. He’s been talking a lot, and I know he has to have confidence, but I think he’s a bit reckless. I don’t get affected by his talk or people thinking I’m the underdog. I’m just focused on the job.

“As far as not having fans in the arena, I don’t think it will affect this fight. It’s like sparring but more intense. I’m the type of fighter that if I smell blood, I’m going to go for the kill.

“Being in Las Vegas was probably the best move I made in my career. I’ve seen Fulton’s style in the gym, and it’s nothing I’m not prepared for. I’ll adapt to the ring and make my adjustments. Ultimately, I’m going to come out with the victory.

“I just need to vary up my attack. I have good footwork to get on the inside. My head movement is strong, and all of that is going to be key in this fight. I think he has some trouble with fighters who move backward against him, so I’m going to use my boxing too. We’re prepared for anything we need to do in there.”

“It’s a bit of an unusual situation, but I take every fight as if we’re just another day in the gym or another sparring session, so this will be nothing different. As boxers, as fighters, as humans, we just have to adapt. No excuses, whatever comes our way, we’ve got to figure it out, and that’s what I’m going to do on Saturday. I’ll adapt to no crowd, and you guys may hear me talk a little bit in the ring.

“I prepared for Aleem the same way I prepare for every fighter. I stay focus and try to make for 10 or 12 rounds, whatever the fight may be, and focus three minutes at a time. He’s a little awkward. You never want to underestimate anyone, so I’m treating him like he is a world champion.

“I’m pretty sure I’ll take him to deep waters, and deep waters don’t mean the seventh, eighth, or ninth round -deep waters say the third round, and he’s still got seven to go.

“Aleem is much different from my last opponent (Yenifel Vicente) because he’s a cleaner fighter. You can tell he’s a respectful opponent, and he comes from a good boxing lineage in Detroit. He’s a lot different from Vicente, who came in there just swinging for the fences and looking to land a lucky shot. I had him frustrated, so maybe he was looking for an out or try to distract me, but Aleem will be much different from that.

“If I win this fight, I think a title shot could be next against the winner of Saturday’s main event. Or I would fight Figueroa or [Murodjon Akhmadaliev]. I’ve been ready for all of these guys. I should have already been in the position that Fulton and Leo are at right now, fighting for a world title.”

“I feel like my win over Adam Lopez was a big upset. I feel like I made a big statement, and I want to make another big statement on Saturday night. As far as that being my TV debut, there was no extra emotion behind it. I was completely confident in myself and just ready to go in there and do what I do.

“The super bantamweight division is very stacked. It’s tough because a lot of the champions have been champs for years. The big money fights are there; they just need to be made, and right now is the perfect time to make those fights because we have to give the fans what they want. I’m ready for the big debates right now.

“This is a massive opportunity for me to catapult myself into the top spots. It’s going to raise me in the rankings, and even if my next fight isn’t for a world title fight, I’m going to be next. It’s a huge opportunity, and I’m looking forward to it.

“Leo and Fulton are both great fighters, so to be able to see them up close is great because I want to fight both of them. Either one, it doesn’t matter. Whoever wins, that’s who I want. I have to show up and show out because just winning isn’t good enough for me. I have to dominate, and that will solidify what I’m about.

“Tramaine Williams is a brilliant fighter. He has swift hands, fast feet. I think my most significant advantage going into this is he’s never fought a fighter like me. I just have to be cautious. I don’t believe he’s a big puncher, but I have to be careful of his skill and his boxing IQ. I don’t feel like he’s faced a real dog: somebody who is showing up to win, somebody who has faster hands and feet than him.

“I’m telling myself I have ten rounds to knock him out. You can expect a lot of action from me on Saturday night. I don’t think my opponent wants a lot of action, but I want to get him out of there. But I’m going to let it come to me; I’m not going just to go in there and force it. It will come, though. It won’t go the distance. I’m prepared to go the distance, but my ultimate goal is to get him out of there.”

“I’m in better shape for this fight compared to our first fight. We’re working on fighting off of the ropes better and fighting in the center of the ring more effectively.

“A knockout is always functional, but I like to take it one round at a time. If the knockout comes, it comes, and we’re going to take advantage. I’ve been dropping fighters in camp, so the chance of a knockout is pretty high.

“He was an okay opponent. He had a chin and was in shape. His punches weren’t useful, though. I made sure my punches landed, and I hurt him a few times, I just couldn’t finish him.

“This fight will be different because I’m going to work off the ropes more instead of letting him gain momentum with his punches. The last battle was just him being active and having a good chin -that’s all that stopped him from getting knocked out. If I was in better shape, I could have finished him. If I get the opportunity this fight, I’ll finish it.

“I expect to see a slight difference in Escudero. If you change trainers, then you should have made some changes. I had an excellent hard camp, and whatever he brings, I’ll be ready for it.

“Some people think that Escudero won, and that’s their opinion. But I knew what I was doing. He wasn’t sufficient. I think just by me being on the ropes, it made some people believe that I was losing. But for me, I’m very comfortable fighting on the lines.

“My manager Trent Williams is a young athlete, so he knows how this goes. He knows the things to do and what to say. You never see him angry or frustrated; the only time he’s aggressive is when he’s training or on the field. His work ethic is incredible, and that’s motivation in itself. He’s a great role model, and I learn a lot from watching him.”

“Everyone saw what happened in the first fight. I believe I did enough to get the win, but it is what it is. I’ve changed my team and am working with Kevin Cunningham now, and that is going to make the most significant difference heading into this rematch. Everyone is going to see a different fighter than the first fight on Saturday night.

“With Coach Kevin, we’ve watched the tape of the first fight over and over again. We knew we needed to take care of little details, be more productive, and that we couldn’t leave it up to the judges. I have to be more intelligent in my game plan and change my angles. I think those were the most important things we worked on.

“We plan to bring the fight to George and make it entertaining. I know that I have enough power to make sure it doesn’t go to the cards. That’s what we’re looking for.

“I’ve known Kevin for a while. He’s worked with a lot of world champions, and I’ve seen how different it is to have a strong team on my side. To be a great fighter, you need to have a great team supporting you.

“I’m much more confident heading into this fight than the last one. He knows that he lost the fight. I know that I did enough work to get the victory. Now in the rematch, I’m going to show my confidence in the ring. My only goal is to beat Joe George. I am working toward becoming a world champion, so I had to get this rematch settled before anything else. After Saturday night, we’ll keep moving forward.”

Adrien Broner: If I return to 135, I’ll destroy the weight class »