By Kenneth Friedman: Ryan Garcia reports that he sent Youtube celebrity Jake Paul to the hospital today after he was injured during the body shot challenge. Ryan says Jake was sent to the hospital via ambulance. No word on how hurt Jake was from the shots.

Some fans on social media are saying it was fake, and a staged event, but it doesn’t look that way. You can hear the impact and see the force in Ryan’s shots to the midsection of Jake Paul.

His reaction is exactly what you would think it would be getting hit to the body without a protector. Paul looked like he was in sheer pain from the body shot.

The dominant Garcia, who could be the biggest puncher in the 135-pound division, hurt Jake with a powerful left to the body during a body shot challenge done without him wearing a protector over his midsection.

Moments after the #2 WBA, #3 WBC ranked lightweight contender Ryan Garcia landed a tremendous left to the body of Jake Paul, he turned around wordlessly and walked over to the wall and stood with a look of pain on his face.

You can only wonder what went through Jake’s mind for him to volunteer to take a body shot challenge without a protector. Ryan isn’t some Joe from the street that doesn’t know how to punch, and probably have a lot of power.

He’s one-punch knockout artist, and you don’t fool around with those type of fighters for body shot challenges.

“Jake Paul – *disclaimer I took six punches before this and still can’t breathe.”

That sounds like right what Jake says about him taking six shots instead of one. When Ryan Garcia does body shot challenges, he nails his victims repeatedly with left hands until they often crumble in pain. Ryan hitting Jake Paul six times sounds like the norm for him.

You’ve got to give Jake Paul a ton of mad respect for him daring to take part in a body shot challenge against Ryan Garcia.

Ryan Garcia with still no opponent

As far as Ryan Garcia’s next fight, it’s limbo right now. He turned down the offer from Golden Boy Promotions to fight on July 4. His opponent was rumored to be Javier Fortuna, who is a dangerous guy. Fortuna and Linares are now fighting each other next, which leaves Ryan still needing an opponent.

Fringe contender Hector Tanajara might be an option for Ryan Garcia, but he’s arguably a step down from Fonseca, Carlos Morales, and Duno. Golden Boy should be looking at putting Garcia against increasingly better opposition rather than worse.

If Golden Boy can’t find a place for Ryan to fight on the July 24 card, then he may have to wait until September. Oscar De La Hoya of Golden Boy said he’d keep making offers to Ryan to get him back in the ring.

De La Hoya says Ryan “moves the needle,” and he doesn’t have anyone else in his stable that brings in the same kind of numbers other than Canelo Alvarez. Ryan wants to face the world champions Gervonta Davis and Devin Haney, but that’s not looking like it’s going to happen.

Golden Boy wanted to match Ryan in a big step up fight against Jorge Linares on July 4, but the match couldn’t happen. Linares wasn’t able to get into the country. It’s now looking like Linares may go in a different direction.

In Garcia’s last two fights, he’s scored first-round knockouts of Romero Duno and Francisco Fonseca. That’s a clear indication that Golden Boy Promotions needs to begin matching the 21-year-old Ryan Garcia up against better opposition. It’s too bad Linares, and Fortuna isn’t available for Ryan to fight because either of them would be perfect for a step up fight. 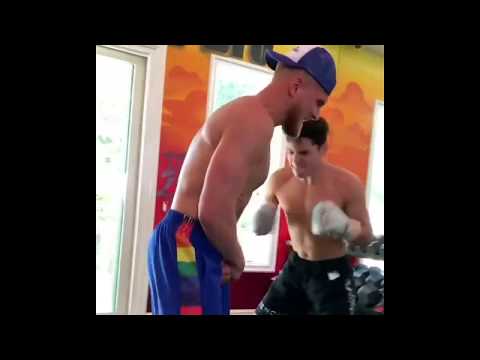