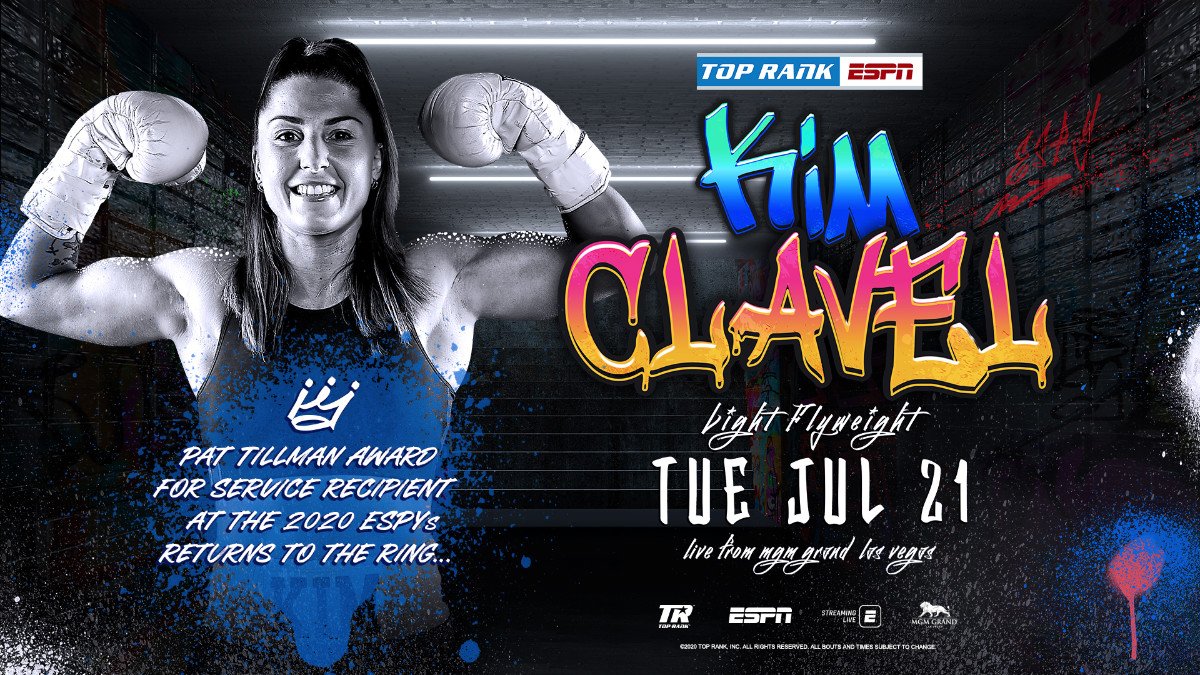 Undefeated light flyweight boxer Kim Clavel, who won the 2020 Pat Tillman Award for Service at the ESPYs, is ready for her next fight.

Clavel took a hiatus from the ring in March to return to work as a nurse at elder care facilities in Montreal and will make her triumphant return in a scheduled eight-round fight Tuesday, July 21 at the MGM Grand in Las Vegas against an opponent to be named.

“I am grateful to Groupe Yvon Michel (GYM), Top Rank, and ESPN for this opportunity, which allows me to make my United States debut on a major ESPN-televised card in Las Vegas,” Clavel said. “This is significant for my boxing career, and my training team and I are already counting down the days.”

“When Kim Clavel’s boxing career was paused due to the pandemic, she didn’t hesitate to go head-to-head against this new opponent,” said Yvon Michel, Clavel’s promoter. “It is with the same courage and enthusiasm that she will step into the ring on July 21 to pursue her goal of becoming world champion and continuing to inspire people. Thank you to Top Rank and ESPN for offering Kim this unique opportunity to showcase her world-class talent.”

Before the COVID-19 pandemic, Clavel (11-0, 2 KOs) had established herself as one of female boxing’s rising stars. She won the NABF light flyweight title last December and was scheduled to headline her first show March 21 against former world champion Esmeralda Moreno.

Clavel put her boxing career on hold and returned to work on March 21. She worked night shifts and treated Montreal’s most vulnerable citizens. Clavel stayed in shape with a modified routine of jumping rope, running, and shadowboxing, preparing for her ring comeback while dealing with the mental and emotional toll of her day (and night) job.

Abner Mares, the former four-time, three-division World Boxing Champion, was sworn in as a U.S. Citizen yesterday in a Naturalization ceremony in Los Angeles. Due to COVID-19, Abner’s naturalization ceremony was moved to a drive-thru swearing-in process, keeping all of the new citizens safe.

“I’m so happy to be a U.S. Citizen, it’s a dream come true,” said Mares. “I came here without papers at age seven and have always considered myself a citizen of both the United States and Mexico. Having been here for over 20 years, it’s an honor to officially be part of this great country as a citizen. My heart is bursting with pride, and I look forward to registering to vote, and voting this November.”

One of the sports world’s most admired and revered athletes, Abner inspires fans across the globe with his transparent, aspirational nature and community-driven mindset.

In January 2019, Abner suffered a detached retina during the last week of his training for his scheduled Super Featherweight title fight against Gervonta “Tank” Davis. He withdrew from the fight due to his injury and shared his emergency retina reattachment surgery. Showing that elite athletes suffer debilitating, temporary injuries, almost a million fans supported his recovery journey throughout 2019. Abner’s significant and organic presence on social media, and his T.V. work on FOX Sports, FS1 and Telemundo, helped bring his fans closer to him and his health struggles.

Fully cleared to train and fight, Abner now looks to spring to re-enter the ring and pursue a fifth world title, and he continues to share his journey with the fans in an inspirational way.

Born in Guadalajara, MX, raised in Mexico and the United States, his parents worked multiple jobs to provide for their 11 children. Abner’s story of his family’s struggles both in Mexico and the U.S. has been widely documented in the media, as he came to the U.S. at seven years old, immigrating to the U.S. via Tijuana. The journey and challenges he and his family faced as new immigrants, not knowing English, poor, picking bottles and cans for money and dumpster diving for food were real. He credits boxing’s core tenants of strength, focus, and dedication that changed his life. It was a sport his father introduced him to at a young age, with Abner starting his training professionally at age 12.

“Boxing has meant everything to me,” he said. “It’s allowed me the financial opportunities to rise out of poverty as a child, and through commitment and determination, I’ve set a statement for hard work and educating yourself in the sport.”