Amir Khan: Joshua has to go for the KILL against Fury

By Kenneth Friedman: Amir Khan is giving Anthony Joshua very little chance of beating Tyson Fury if he makes the mistake of making it a technical battle against him in 2021. Khan recommends that IBF/WBA/WBO heavyweight champion Joshua (23-1, 21 KOs) just go for the kill to KO WBC champion Fury (30-0-1, 21 KOs).

If it were that easy for fighters to storm after Fury and knock him out, he’d have been KO’d against the likes of Dereck Chisora, Wladimir Klitschko, and Deontay Wilder.

Fury, 31, isn’t easy to hit with clean shots, and he’s got better than the normal chin. Wilder nailed Fury with massive punches in both of their fights, and he took the blows well apart from a couple of occasions.

Being pressured is what seems to bother Fury the most, as gets tired is can be hit at close range. Otto Wallin, 6’6″, had a lot of success in taking the fight to Fury and landing a lot of clubbing shots at medium to close range. Fury wasn’t a happy camper in the Wallin fight, and he came out of it looking like he’d gone through a war zone. 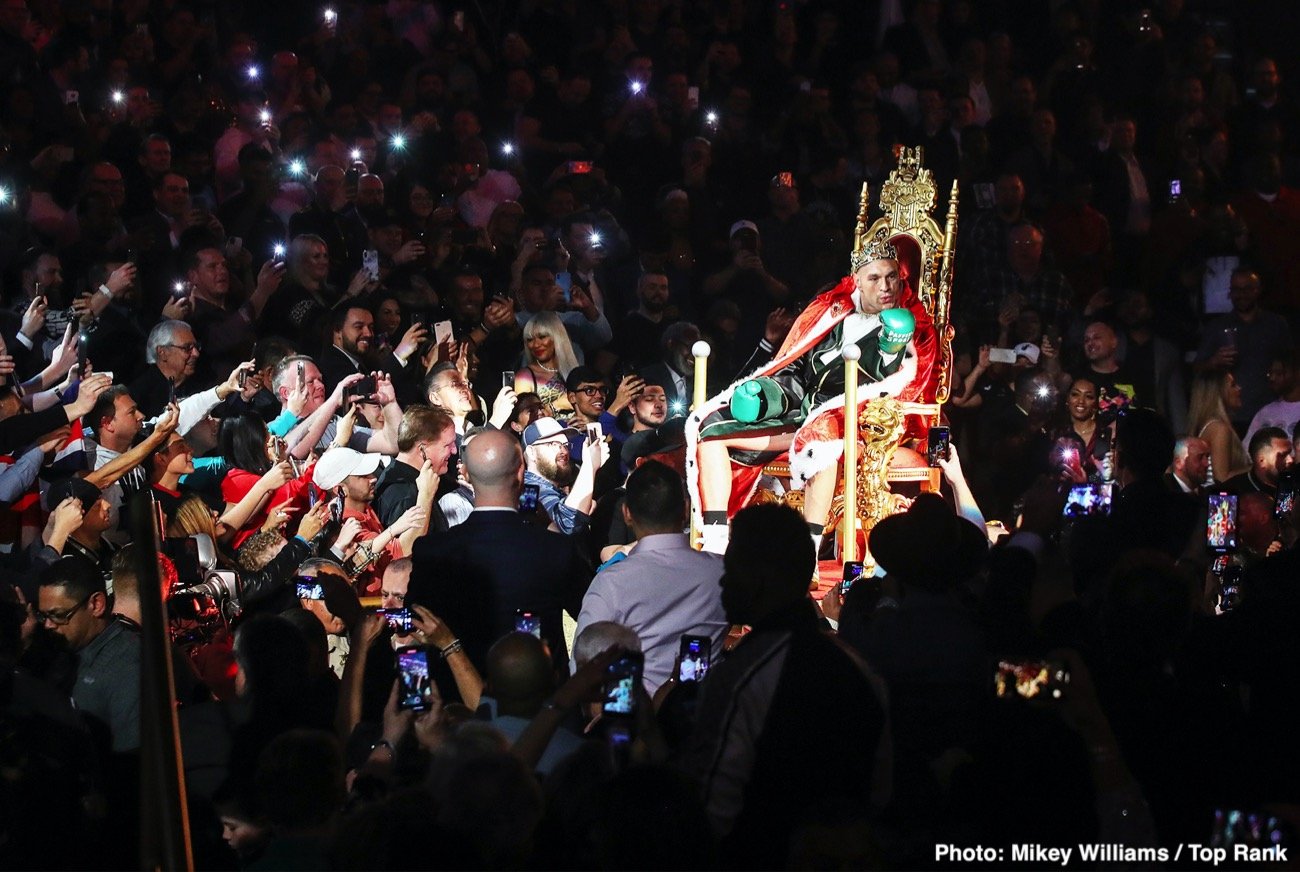 AJ has to go for the kill

“Fury-Joshua, what a fight that’ll be. It’ll be good for boxing,” said Khan to Fighthype. “I think it will, yeah, because they both want to prove who the best is in the UK. It’s a UK fight, and it’ll be massive.

“I think it will because they both want to prove a point, and they want to show who #1 is, and they’re both unbeaten. When you’ve got two unbeaten fighters in there, it’s dangerous, man.

“They don’t just want to win. Joshua and Fury intend to succeed properly to say, and they don’t want to win and have a close fight. The two of them want to make sure that they won easily.

“I think when it comes to technique and being technical, and then you have Fury by a mile. I think AJ has to go in there and go for the kill. He [Joshua] might be stronger, and he might be the harder hitter, but he has to go in there hoping he’ll win the fight,” said Khan.

Fury vs. Joshua will be a vast UK fight, but it may not take place in that country. That’s going to be a big let down to British boxing fans that have supported both fighters their entire careers.

Joshua’s promoter Eddie Hearn would like to have the fight staged in the UK in the best possible world, but the reality is that there may be more significant offers from outside countries.

The winner of the Fury vs. Joshua will be viewed as #1 in the sport, but hopefully, there’s no controversy involved. With the boxing skills that Fury possesses, he tends to win his fights conclusively.

“He can’t technically beat Fury,” Khan said. “Fury is a tactician. It’s hard to say [if Joshua will go for the KO] because he’s been hurt before, and it’s going to be in the back of his mind.

“Definitely, because they’re both from the UK,” said Khan when asked if the pride will play a factor in the fight. “It makes it even more significant. We haven’t had a British battle like this since Lennox Lewis and Frank Bruno fought.

“That was a massive fight, but I don’t think it’s as big as this one [Joshua vs. Fury]. The heavyweight division is the biggest event. I think it could be like a World Cup final with those two heavyweights, with each of them having world titles in their [possession],” said Khan.

Joshua will be making a mistake if he attempts to utilize the Klitschko-esque style of fighting that he employed for his last contest against Andy Ruiz Jr. in December. That style of fighting would be playing into Fury’s hands, enabling him to outbox Joshua.

For Fury to win on points, he’s got to stay off the deck. Getting knocked down twice by Joshua will make it a difficult fight to score. We saw that in Fury’s first fight with Wilder in 2018.

Joshua has so much power; it’s possible that Fury will hit the deck two or three times in the fight.

Khan: Joshua vs. Fury would be massive in the UK

“The UK has all the heavyweight world titles,” said Khan. “When has that happened in the world? The Ring Magazine title, the WBA, WBC, WBO, IBF, all the titles in the UK.

“Having them both in the UK fighting each other, I think it’s going to be massive. Saudi is a fantastic country. I’ve fought there myself. Because it’s two UK fighters, I think it’ll be a little more interesting.

“The fans deserve that because they’ll be behind both fighters for such a long time, especially in the UK fans that have been there from day one. So I think they deserve that. It would be sad to take it away from them,” said Khan on Joshua vs. Fury.

You can count on Joshua having a great game plan that will give Fury problems. Fighting him on the inside would be the best way to take away his reach and head movement.

What we learned from watching the Wallin fight is that Fury is an average fighter on the inside, and he gets beaten up. Joshua is a far better inside fighter with the strength to keep Fury from mauling him as he did with Deontay Wilder.

Joshua’s uppercuts would be lethal on the inside against Fury, and he might knock him out quickly if he gets in close early.