By Jim Maltzman: In a raw display of punching power, lightweight contender Ryan Garcia was able to backup UFC heavyweight Francis Ngannou during his body shot challenge this week.

The power on the young 135-pound contender Ryan’s shots was remarkable for a guy his size. For him to move a mountain of a heavyweight like Ngannou (15-3) was an impressive fete.

At one point during the body shot challenge, Ngannou started laughing, and you could tell that he was beginning to feel the pain from ‘King’ Ryan (20-0, 17 KOs). Ngannou wasn’t just laughing, though.

He was backing up from the power from Ryan’s body shots, and it seemed painfully obvious that he was bothered by them. Ngannou was probably relieved when Ryan Garcia finished his body shot challenge because it’s an ordeal even with the body protector on.

On a positive note, Ngannou did far better taking the body shots from Ryan Garcia compared to others. Ngannous wasn’t doubled over in pain or asking for him to quit.

“I think it’s Safe to Say @francisngannou Has passed the Body Shot Challenge 😅 Comment who should go next,” said lightweight talent Ryan Garcia,

“The one-punch KO master. I’ve seen him fight and now he’s here with me,” said Ryan Garcia of Francis Ngannou on his social media. “We’re going to do some stuff and hopefully. Yes, in the lab. Let’s go. I’m getting him ready or the body-shot challenge for Francis. I might not even move him though,” said Ryan Garcia. 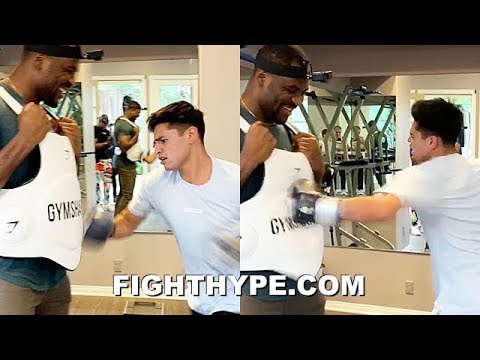 Ryan Garcia is a fighter that has big things ahead of him in the sport. He’s currently out of action because of the pandemic lockdown, but his promoters at Golden Boy will be looking to bring him back in the summer. His next opponent is anyone’s guess. They want to move the 21-year-old Ryan Garcia up against better opposition, but it’s not a good time to step up.

What do you think about our combination: My power 💪 and @kingryang speed 🥊 ??

Ngannou was recently mentioned as an opponent for heavyweight contender Dillian Whyte for later this year, but those plans have been halted. UFC president Dana White has other ideas for Ngannou, and he’s looking to let him face any boxers for the time being.

This would be the perfect time for Ngannou to crossover into the boxing realm, as his career is on a high note right now. Once Ngannou starts losing in his matches in the octagon, he won’t have fighters like Whyte calling him out any longer. In other words, Ngannou’s time will have passed.