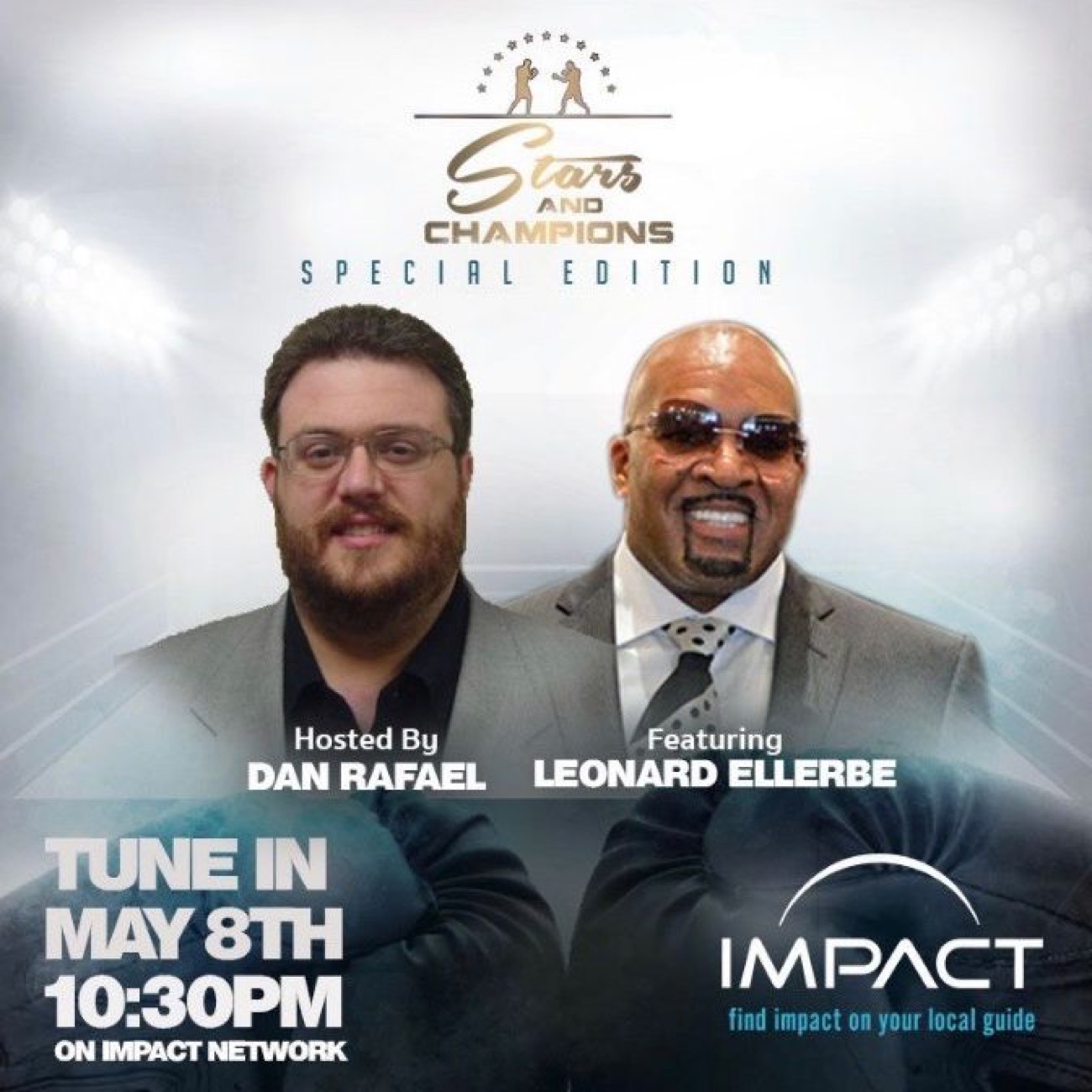 CEO of Mayweather Promotions, Leonard Ellerbe, who was instrumental in building a multi-million dollar empire with Floyd “Money” Mayweather, will be the first guest on the Impact Network “Stars and Champions” show, debuting this Friday May 8, 2020, at 10:30 p.m. ET / 7:30 p.m. PT. The 30-minute televised broadcast, hosted by boxing icon Dan Rafael, will be an informative open discussion about the effects of the COVID-19 pandemic and how it is going to affect the future of boxing. Rafael and Ellerbe will delve into the vital measures necessary to restore live boxing events to the fans.

The Impact Network will air “Stars and Champions” across all major cable, satellite, and digital channels. Impact is now broadcasting 24-hours a day, seven days a week, and can be viewed on DIRECTV’s Channel 380 or Channel 268, DISH Network’s Channel 268, Fios TV Channel 787, and Comcast’s Xfinity Channel 400. In addition, Impact Network can be viewed digitally on Roku, Apple TV, Amazon, Google Play, Microsoft, and Sling. Please check local listings in your area for more information.

“Boxing fans from all over the world should be tuning in this Friday on the Impact Network to really get a good idea on Leonard Ellerbe’s vison, and what he thinks boxing will look like after the COVID-19 pandemic,” said host Dan Rafael, who won the Nat Fleischer Award for career excellence in boxing journalism from the Boxing Writers Association of America in 2013. “As we all know, the sports world is taking a massive hit with the virus, and boxing must innovate to keep its enduring legacy going strong. Ellerbe is the perfect first guest and I believe “Stars and Champions” will be an excellent show, with pertinent information that boxing fans, on all levels, will appreciate.”

“Leonard Ellerbe is known all around the world for his role in helping Floyd Mayweather become the highest paid athlete of the last decade,” said Bishop Wayne T. Jackson, CEO, and president of the Impact Network. “His many years in boxing as a manager and promoter garners a considerable amount admiration from his peers and the fans. With the COVID-19 pandemic reaping havoc across the world, its only fitting that we interview a man who knows the intricacies of boxing at the highest level. We are thrilled to have Leonard Ellerbe as our initial guest.”

“The Impact Network is scheduled to showcase a tremendous amount of live televised boxing events when the sports world gets back to normal,” said Royal Jackson, Impact executive producer of Stars and Champions. “Right now, our main objective is to give fans an informative show, as we enter uncharted territory as Americans, while the COVID-19 pandemic reaps havoc across the world. We will be showcasing some of boxing brightest personalities on “Stars and Champions”, giving the fans a unique outlook into the future of boxing.”

“I am excited for the launch of “Stars & Champions” and the progress that boxing is making on Impact,” stated Steve Marcano of SMH Group, who’s company recently signed a five-year deal with Impact Network to bring thirty-six live televised boxing events to the forefront.

“Stars & Champions” is the first step in a systematic approach to make Impact a viable player in the boxing space and the sports world generally,” said Rick Torres, Head of Business Affairs for Impact Boxing.