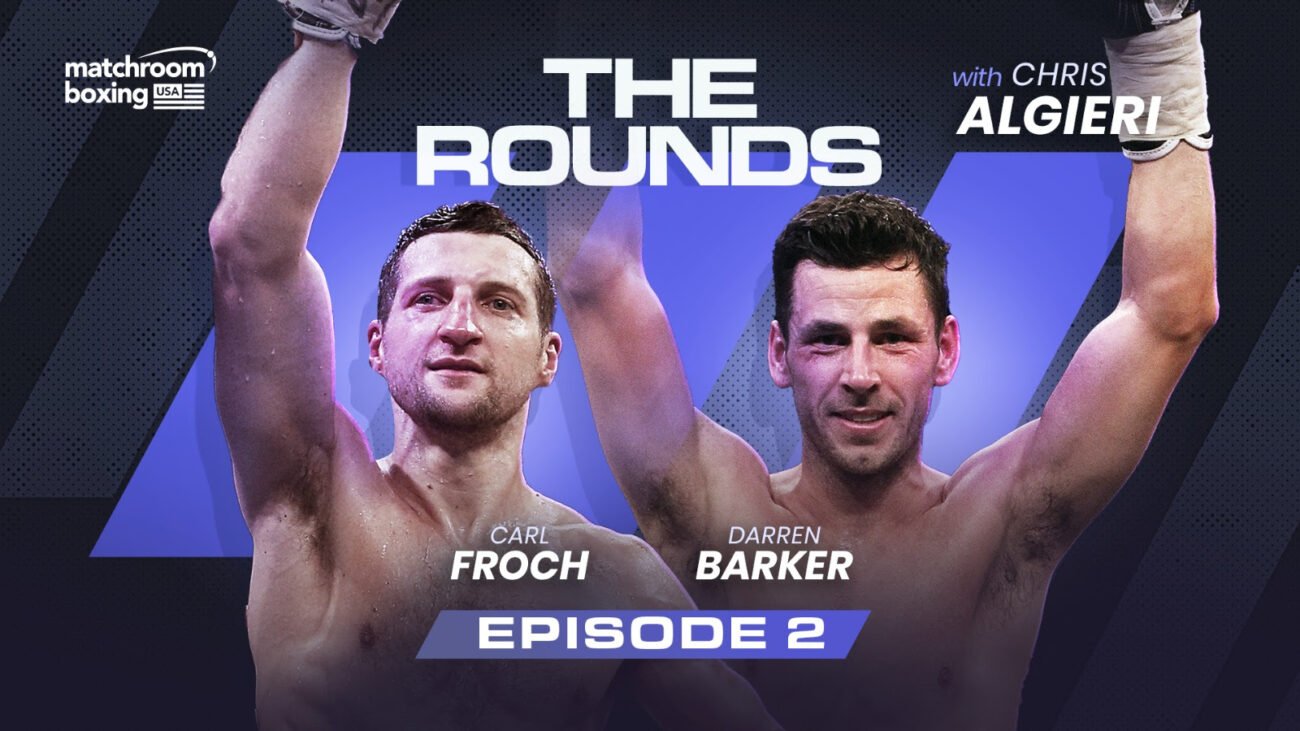 Carl Froch and Darren Barker own some of the best wins on away territory by British fighters, and the duo talk about fighting on the road with Chris Algieri on the latest episode of ‘The Rounds’.

Froch began life as WBC World Super-Middleweight champion with a thrilling final round win over Jermain Taylor in Connecticut in April 2009, and then in 2010-11, ‘The Cobra’ went on the road during the Super Six series to face Mikkel Kessler, Arthur Abraham, Glen Johnson and Andre Ward.

Barker’s first World title action saw him face the formidable Middleweight king Sergio Martinez in Atlantic City in October 2011 and then returned to the same city in August 2013 to achieve his World title dreams in dramatic fashion against IBF king Daniel Geale.

Both men open up on those trips and more, including great stories on their sparring sessions together.

Carl Froch: “I enjoyed being on the road. When we boxed for England we were going to hostile environments and fighting top fighters back-to-back in nations tournaments, but I was always a nervous fighter. So, when I defended my title against Jermain Taylor in Connecticut, I was nervous about it all.

“Not so much boxing abroad, but more that it was Taylor, a former undisputed Middleweight World champion. I saw him get out of this limousine for the press conference in NYC and he just looked like the don, he had this nice suit on and looked crisp and clean. I was just there with a hoodie and t-shirt and I was thinking ‘do I belong here?’ It was quite a daunting thing for me, and I was always quite nervous and apprehensive as a fighter, I was unsure of myself, and I was a new World champion and making my first defense. I didn’t really know if I belonged at World level and here I was fighting Taylor in America. I look back at that fight now and think how naive I was at that level and I just had to put all my trust in Rob McCracken and my fitness, my refusal to quit and my competitive nature, I like to win.

“[Kessler and the volcanic ash cloud] On Tuesday of fight week we had Sky News on and they were saying all the flights we grounded so I am thinking I am definitely not going, the US broadcasters aren’t going to be able to make it over, so it’s definitely off. We had a barbecue in the garden, I had a couple of cans of Guinness; I don’t drink much, and I had a couple of them in fight week! The next day my promoter rang me and said that the Sauerlands’s were sending a private jet and the flight was at 2pm. Private jet sounds glamorous but it wasn’t, it was a five-seater, it was bumpy all the way and Rob doesn’t like heights so he was white all the way and didn’t say a word, hanging onto the seat and looking at me, and I was winding him up saying ‘I think we’re bang in trouble here this plane is all over the place!’

“I crashed the weight which I never do, and at the weigh-in I felt weak. It’s the first and only time I ever did that, but I don’t want people to think I’m making an excuse, I felt good to fight and had a great 12 rounds against a brilliant fighter and I just didn’t quite do enough. But going over on the Wednesday under that ash cloud in fight week and being overweight, switching off, it was horrible. I believe that things happen for a reason though and in boxing you don’t win or lose, you win or learn. I learnt how to come back and in my next fight I fought Arthur Abraham and the WBC title was back up for grabs, that boosted my spirits and that loss then didn’t feel as bad.

“The loss with Andre Ward felt worse. Andre is a fantastic fighter, very skillful, fast, hard to hit, good with his jab. I remember getting out of the fight thinking, I had a decent rounds in 10, 11 and 12, and I was getting into it and I thought, why didn’t I start earlier, why didn’t I get into it, why didn’t I believe in myself? But that’s what we do when we lose, we look for reasons.”

Darren Barker: “I never felt more nervous or under pressure in the States and I think a big part of that was the experience of fighting all over the world as an amateur.

“I flew into New York with Eddie Hearn and we were in and out for the Martinez press conference, I remember the American’s almost laughing at me for showing any confidence, even though I was undefeated and European champion, I just hadn’t fought anybody. I was confident in my ability, but it was the unknown, I had sparred hundreds of rounds with Carl, an elite level fighter, but it’s still sparring. I knew I was capable of being in there with elite fighters, but I didn’t quite understand where I was at the time.

“I don’t have any regrets looking back at my career, but I have a slight one looking back at that fight because I think if I had believed in myself a little more, been more aggressive and forced the action more, then potentially I could have caused a huge upset. I’m not saying that it would have happened, I just wished I gave it a bit more. But the whole unbuild up was just the reason I chose boxing, I was on top of a huge skyscraper in New York for the presser and thinking, ‘this is it, I’ve made it’. I was walking up fifth avenue with Eddie and we walked past a shop with bright green trousers in the window and Eddie said: ‘you should buy them and wear them at the press conference for a laugh!’ I said: ‘no chance, I wouldn’t be seen dead in them!’ We got to the press conference and Sergio was wearing that exact pair of trousers!

“The Repton club had a knack of churning out top quality Southpaws so I was never fazed at fighting them, I knew I would be able to compete with him and it was a great experience for me and one that was massively valuable going onto the Geale fight.

“I’d been to Atlantic City for the Martinez fight, so it wasn’t alien to me and I was driven to right that wrong. We had a similar game plan, to be aggressive but smart, on the front-foot and hold center of the ring. It wasn’t until I got in there that I realized how awkward he was, he had a knack of getting out of range, I was falling short and adopted a different plan to get on his chest and outwork him.

“The moment I got put down in the sixth round, a lot of people know my brother Gary passed away, he was a very good fighter and if I had have lost that fight I would never have fought again, it would have been a box that hadn’t been ticked and it would have eaten away. So, I was just so prepared to leave everything in the ring that night that a body shot was never going to keep me down, fast-forward to the 12th round and hearing Michael Buffer say, ‘and the new’, I still can’t believe it. I achieved what I set out to do.

“There were a lot of question marks over my toughness, but I always knew I was tough. You don’t do 12 rounds of sparring with Carl and not be tough! I always knew there was a fight out there to show everyone I was mentally and physically tough.”

Froch and Barker star in the second episode of ‘The Rounds’ and the first episode, featuring Mikey Garcia, Devin Haney and Daniel Jacobs talking about the highs and lows of boxing, can be found on Matchroom Boxing’s YouTube channel.