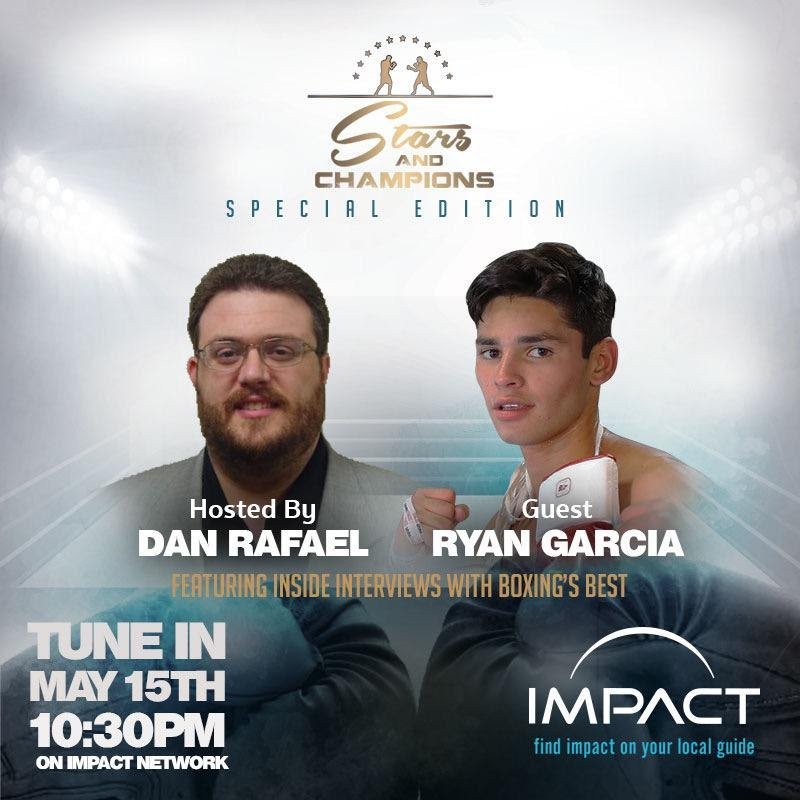 Golden Boy Promotions undefeated rising lightweight contender, 21-year old Ryan Garcia (20-0, 17 KOs), will be the featured guest on the second episode of “Stars and Champions”, airing this Friday, May 15, 2020, on the Impact Network. The 30-minute broadcast, hosted by Dan Rafael, begins at 10:30 p.m. ET / 7:30 p.m. PT. Rafael gets confirmation on who Garcia wants next in the ring, and what he has been doing to keep busy during the COVID-19 pandemic.

“Ryan Garcia and I have a great relationship and the topics we covered during our conversation were amazing,” said Dan Rafael. “He talked about his close friendship with Saul “Canelo” Alverez, how he’s like a big brother to him, and the unbelievable coaching he’s getting from their trainer Eddy Reynoso. In addition, Garcia talks about potential mega fights with Gervonta Davis, Devin Haney, and Teofimo Lopez, all of whom are in their early to mid-twenties. We also discuss his routine during the pandemic, how he got introduced to the sport of boxing, as well as his self built social media empire. This is a must see episode of “Stars and Champions” if you’re a fan of Ryan Garcia, and boxing in general.”

“We are thrilled to have Ryan Garcia as our next guest,” said Royal Jackson, Impact executive producer of Stars and Champions. “The kid is only twenty-one and has a charisma about him that is unprecedented for a young man his age. Furthermore, to his incredible talent in the ring, he’s a down to earth individual who brings a breath of fresh air to the sport of boxing.”

“Ryan Garcia is coming off two incredible knockouts and his 6.1 million followers on Instagram is proof that he’s well on his way to becoming the next superstar in the sport.” stated Steve Marcano of SMM Boxing. “We are booking the biggest names in boxing on “Stars and Champions”.

THE EFFECTS OF COVID-19 ON SPORTS AND BOXING

Posted by Impact Television Network on Monday, May 11, 2020

Dan Rafael, Leonard Ellerbe – The debut of “Stars and Champions,” headlined by CEO of Mayweather Promotions, Leonard Ellerbe, made its highly anticipated debut this past Friday on the Impact Network. Ellerbe and host, legendary boxing writer Dan Rafael, had an open discussion about the challenges facing the boxing business as we continue to tread through the COVID-19 pandemic. Replays of “Stars and Champions” can be seen on Impact Boxing Series IGTV, Impact Facebook page, and on online at www.watchimpact.com.

The debut of “Stars and Champions,” headlined by CEO of Mayweather Promotions, Leonard Ellerbe, made its highly anticipated debut this past Friday on the Impact Network. Ellerbe and host, legendary boxing writer Dan Rafael, had an open discussion about the challenges facing the boxing business as we continue to tread through the COVID-19 pandemic. Replays of “Stars and Champions” can be seen on Impact Boxing Series IGTV, Impact Facebook page, and on online at www.watchimpact.com.

“Leonard Ellerbe and I had a great informative conversation about boxing, and the business side of things, plus what challenges lie ahead as the COVID-19 pandemic continues to affect the sports world,” said Rafael. “Ellerbe also hinted on the possibility of Floyd Mayweather returning to the ring. I believe “Stars and Champions” will be here to stay as I have been getting great feedback from our first show.”

“The first thing that we’re going to do, Mayweather Promotions, we’re going to roll out a nice small show for our younger fighters,” said Ellerbe. “We’ve already secured a venue. It’s just a matter of the timing, and we’re looking at potentially the end of July, and all that just depends on what happens here in Las Vegas.”

“We are very pleased, here at the Impact Network, with the numbers generated from our first show,” stated Royal Jackson, Impact executive producer of Stars and Champions. “Leonard Ellerbe and Dan Rafael did a great job with their discussion. The show is now available on our Facebook page.”

READ: Ryan Roach’s Fighter Locker inks Ukrainian boxing prospects
“We are off to a great start with our initial “Stars and Champions” show,” stated Steve Marcano of SMH Group. “The content was highly educational, and all of our shows moving forward are going to be fan-friendly.”

“The progress being made with our first show has been excellent,” said Rick Torres, Head of Business Affairs for Impact Boxing. “As we march on, I believe “Stars and Champions” will continue to gain momentum in the boxing world.”

The Impact Network will air “Stars and Champions” across all major cable, satellite, and digital channels. Impact is now broadcasting 24-hours a day, seven days a week, and can be viewed on DIRECTV’s Channel 380 or Channel 268, DISH Network’s Channel 268, Fios TV Channel 787, and Comcast’s Xfinity TV’s Channel 400. Also, Impact Network can be viewed digitally on Roku, Apple TV, Amazon, Google Play, Microsoft, and Sling. “Stars and Champions” can also be viewed on the Impact Network website and mobile app. Please check local listings in your area for more information.