By Jim Maltzman: Teofimo Lopez (15-0, 12 KOs) isn’t going to fall into the same trap as past opponents of Vasiliy Lomachenko (14-1, 10 KOs) by stepping into the ring, shivering with fear of his talent.

Teofimo knows what he brings to the ring against WBA/WBC/WBO lightweight champion Lomachenko, and he views his talent as being ABOVE his.

Teofimo not afraid of Lomachenko

Having been accustomed to facing fighters that were already mentally psyched out before the first bell in his fights, IBF 135-pound champion Teofimo knows what it’s like to face opposition that weren’t even going to try to win.

This could be the passing of the torch from the older Lomachenko, who has slipped a couple of notches, to the younger fighter Teofimo.

The next star in the sport could be the brash 22-year-old Teofimo, and Lomachenko standing in his way as part of the old guard. It’s Teofimo’s job to get batter Lomachenko, beat him down, and rip the baton from his hands.

After three grueling fights and one mismatch at 135, Lomachenko is there for the taking on Teofimo. Lomachenko had a difficult time beating Luke Campbell, Jose Pedraza, and Jorge Linares since moving up to the lightweight division.

Gone are the days in which Lomachenko can glide his way to victory without getting hit.

Lomachenko’s opponents are mentally afraid of him

“So he already wins the battles before he even gets in there. It’s like Mike Tyson. He would in the ring, and those guys that were fighting him were s****. They were scared. With us, you don’t have that same respect; I guess you would say. I’m younger, stronger; I’m faster and smarter.

“The only thing now is to display them all when we fight. Yeah, Loma already won the battle before it was even happening. The same thing happens with me.

“These guys know that I have power, that I can hit, and they know that I’m very smart. They know I’m hungrier, so that plays in their minds before they even get in the ring, and they have a lot to prove,” said Lopez.

The fighters that Lomachenko has intimidated have been flawed guys from the beginning. We’re talking about guys like Anthony Crolla, Jason Sosa, Miguel Marriaga, and Nicholas Walters.

They could punch a little, but they all had significant holes in their game. Marriaga is more of a gatekeeper level super featherweight, and he didn’t belong inside the same ring with Lomachenko in the first place. If not being signed to the same promoter, that fight wouldn’t have happened.

“I just got annoyed because it’s been nonstop with him,” said Teofimo on Devin Haney. “He’s been calling everyone out, trying to make it seem like everyone is scared of him. I just honestly told him, ‘You’re annoying, and you need to stop.’ It could be a lot of things.

“We don’t know what goes through Devin Haney’s mind. Maybe he just wants to be the greatest, and he wants to fight everybody and show to the world that he never ducked or dodged anyone.

“But then again, it could be for a lot of other reasons. Clout chasing.e does what he does, and he knows what he’s doing. At the end of it all, I’ll be able to show that I am the best. Can’t nobody beat me,” said Teofimo.

WBC lightweight champion Devin Haney (24-0, 15 KOs) has gotten on Teofimo’s nerves with the way that he’s been calling out Ryan Garcia, Lomachenko, and Gervonta Davis. Contrary to what Teofimo says about Haney calling “everyone out,” that’s not true at all.

Haney has consistently focused on three fighters – Ryan Garcia, Tank Davis, and Lomachenko – in verbally challenging opponents. Haney’s situation is a little different than that of Teofimo’s. He’s not with a promoter that has access to a big name to put him in with at 135.

Lopez in the right position

Teofimo is with Top Rank Boxing, who promotes Lomachenko and Richard Commey at lightweight. So it was easy for Teofimo to get the Loma clash, as their mutual promoter Bob Arum was more than willing to make that fight.

The thing is, Lomachenko is the fight that Haney wants and should have gotten as his WBC mandatory in 2019. Haney’s efforts at getting a crack at Lomachenko was foiled with the World Boxing Council elevated Loma to ‘Franchise Champion’ in June 2019.

Lomachenko could have turned down the WBC when they offered him the Franchise spot, but he willingly accepted the new tag. That move gave the fans the impression that Lomachenko doesn’t fancy the style match-up that the young 21-year-old Haney presents for him.

Teofimo to move up to 140 after Lomachenko clash

This will the last time the 22-year-old Teofimo fights at lightweight, as he’s moving up to 140 to take on the big names in that division. Teofimo views the light welterweight division as stacked with bigger and better fights for him than the 135-pound division.

There are three essential matches available for Teofimo as soon as he moves up to 140 against these guys:

Teofimo could miss out on facing WBC/WBO 140-pound champion Ramirez, considering that he’s planning on going up to 147 after he meets IBF/WBA champion Josh Taylor. Even if Teofimo never gets the chance to fight Ramirez, he’ll be kept busy against Taylor, Prograis, and Baranchyk for awhile.

“You have Josh Taylor, Jose Ramirez, but he’s planning on moving up to 147,” said Teofimo when asked about who are the best fighters at 140. “You’ve got Regis Prograis, Maurice Hooker. You’ve got a lot of big names in there, trying to make a living for themselves and trying to make a big name.

“Loma, no. He’s probably anywhere from #3 to #5,” said Teofimo when asked if he views Lomachenko as #1 in the pound-for-pound rankings.”

Teofimos’s opinion on Lomachenko being undeserving of the #1 spot in the pound-for-pound rankings is echoed by a lot of boxing fans and fighters. They don’t see Lomachenko dominating his opposition at 135, and he’s only faced two excellent opponents during his career in Gary Russell Jr. and Orlando Salido. Lomachenko lost to Salido in 2014, and Rurssell Jr. was weight drained for their fight.

Fans want to see Teofimo humbled by Lomachenko, but that might not happen. We could have a changing of the guard here in this fight with Teofimo replacing Lomachenko as the next star. In moving up to 140, Teofimo has a chance to surpass Lomachenko significantly in terms of stardom, as the light welterweight division will put him in a position to receive more recognition than what Loma has received in the lower weight classes. 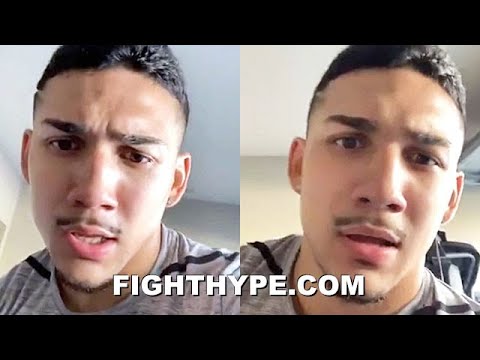 David Haye: I’ll come out of retirement for Joshua-Fury winner »