In his own words: The story of Liam Walsh vs. Gervonta Davis 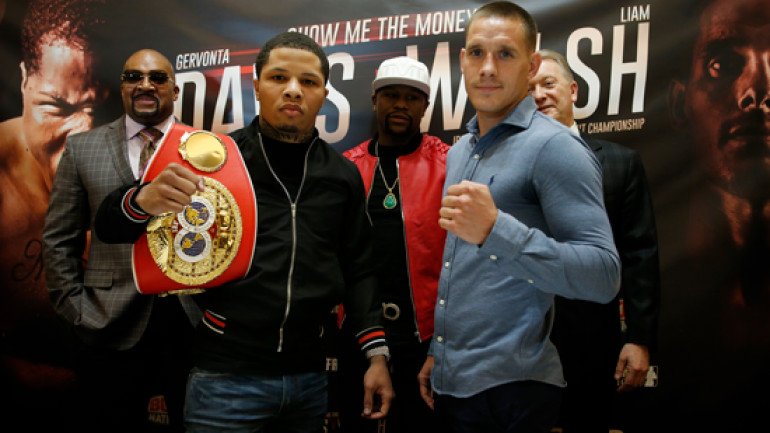 By Ian Aldous: On May 20th, 2017, Liam Walsh (23-1) walked into the Copperbox Arena in London as one of the most respected World contenders in British boxing. The classy southpaw had long dominated the domestic 130lbs scene with reigns as British and Commonwealth champion; he’d paid his dues and earned his well overdue shot at a World title.

He happened to come up against the next big hope from the U.S. – IBF super-featherweight World champion, Gervonta Davis, flanked by his promoter, Floyd Mayweather. Less than three rounds later, that was the last we saw of Walsh, trained by Graham Everett, in a prizefight for nigh on two years. I caught up with the thirty-three-year-old, father of four, to discuss, in-depth, what happened before, during, and after that night.

His thoughts on if his World title shot came a year or two late following dominance of the domestic scene with wins over the likes of Paul Appleby, Scott Harrison, Gary Sykes and Joe Murray (twice):

“Definitely. Jumping up from the British level to Gervonta was too much, clearly. I was pushing and banging the drum for a while, wanting to fight for the European title, but I’m not sure about Frank’s (Warren) relationship with the EBU at the time because it just never happened. I’d wanted to increase the level of opposition because, without trying to sound big-headed, I didn’t think anyone came close to beating me at British level.

I know, early doors, Appleby had me all-at-sea, but after that, I went on and on and on. For me, I felt I was boxing within myself against the British opponents, if I’m honest. Obviously not Appleby – I wasn’t very experienced, and I watch that fight back now laughing, looking at it. You can see in hindsight; I was a young, fresh boxer, and he’d been about longer. He had a lot more experience. I’ve got a lot of respect for Paul.”

“People don’t realize this, but between (Andrey) Klimov (Walsh beat the former World title challenger in an eliminator), it was seven-and-a-half months to the day to fighting Gervonta. There was no excuse for that. I was fit; I was healthy, but the politics of boxing didn’t allow me to fight in-between. For years and years, I’d wanted to fight for the European title badly. I was British and Commonwealth (champion) and felt I was boxing within myself, so I wanted to fight for the European.

Eventually, I got a call or an e-mail off the EBU saying I was mandatory for their title to fight (Guillaume) Frenois. He was 43-1 at the time. I got offered to fight him in January or December after I beat Klimov in October. I said to Graham (Everett), ‘Yes, let’s push for it!’ It’d be a good step up in class, so we were pushing for that, and then the IBF actually contacted us to say: if we were to take any fight in the meantime before fighting for their title then we’d be stripped of our ranking. That’s the politics. That’s not an excuse at all for the result. I lost to the better man on the night, and that’s the way it goes.”

His tactics for beating Gervonta Davis:

“The way we approached the Gervonta fight was all my doing, really. I was very stubborn in how we had to approach it. And I felt like the way to beat him was to almost stink the place out for four or five rounds – take the sting out of him – get him missing. I was aware of his condition, especially when he failed weight a couple of times. I thought this is all falling into place.

Take the sting out of him, let him swing and miss, sting him when you can and get his respect, but don’t hang around too long in the pocket to get chinned. After four or five rounds, then really start to lay on him and bang to the body. Looking back now, I was probably not good enough to do that. I should’ve really had everyone booing after four rounds and stinking the gaff out. Then, out of nowhere, switch, get tight, and get up close to him, roughing him up.”

“The step up from British level to fighting an elite fighter was obviously too much of a jump. I do believe there were World champions I could have beat at the time. I remember when (Orlando) Salido was champion, and I always fancied that fight. I look back now, and it would have been a lot f*cking harder than I thought (laughs)! I thought I was great, so I thought I could beat everybody; it doesn’t always turn out that way, does it?”

His thoughts on the fight and the night itself:

“I’m just gutted I didn’t put a good show on for the fans because walking to the ring, it was just unbelievable. I was so humbled. It just seemed like everybody was supporting me. I’ve always fought with an underdog mentality. Walking to the ring, I felt humbled. I’ll never forget it. I thank every single person who supported me and came to that venue because I’ll never forget the feeling.”

“If anything, it was my concentration that let me down. After round two, I actually came back to the corner and said to my two brothers and Graham, ‘Is this it, is this the best of him?’ Stupidly enough, I thought I’d seen his best. The next round – I did.

My concentration waned 1% or 2%. When you’re fighting elite fighters or world-class fighters – that’s all it takes. That 1% or 2% of something going wrong and you’re beat. I started getting a bit too keen in round three, and it was all done. My bad. I lost concentration for a second, and it cost me.”

After being stopped in the third round, Walsh then disappeared for two years and became the forgotten man of British boxing. It was a mammoth change for someone who lives and breathes the sport:

“The support of family and little bits of work here and there (helped him get through). Not really work; I helped out friends here and there. It was an okay payday off Gervonta. It weren’t what it would be if you fought him now. Frank always paid me fair (compared to) offers we had from elsewhere and what I hear people get paid on other networks. I came through when Boxnation was going, and Frank was putting his own money in, and he was paying as fair as anyone else. I’m not going to sit here and say I didn’t get paid fair because I think I did at the time. I lived off that and support of my family.”

The story of why he then parted ways with Frank Warren and a long and successful partnership:

“I left Frank; Frank didn’t release me. There was no falling out whatsoever. I just felt I needed a change, really. I’d been with Frank for eight or nine years at this point, and I was sort of fed up with the same process all the time. Even little things like the tickets and how that system worked. I just got a bit worn out by it all, and I decided a change would be better for me. In hindsight, I lost two years of my career, and it probably wasn’t (better), but I still sleep well at night because I’m a man of principle.

I got offered ‘x’ amount of money against Craig Evans, which I felt was a good fight to come back to. The money was fair, if I’m honest, looking at it now. Maybe I spat my dummy out a little bit! If you remember at the Copperbox (December 9th, 2017), he had DeGale and Selby on the show. They were with Al Haymon, and he managed to get them for one night, sort of thing. My mind was saying, ‘Well, he’s put a load of money into them two, and I felt I was worth more for the fight with Evans than I was being offered. In hindsight – it was a fair offer. All the money were being thrown at DeGale and Selby, who were then only going to waltz off afterward back to Al Haymon.”

“I’d rather see if I can try and get fights elsewhere with other promoters, and that didn’t work out. We did speak to Eddie (Hearn) over e-mails and messages. He was interested in certain fights, but he can’t make people fight. He can only put fights to them. Them fights never materialized.”

Now competing as a lightweight, Walsh won two fights in 2019 and even captured the WBO European lightweight title:

“I felt brilliant in training. I was refreshed and giddy to box again. When you have that little bit of a break, you can’t wait to get in the gym and try this and try that. Although you can ask Graham and Ryan (brother of Liam and current British featherweight champion), I never left the gym. Ryan was quite active during that period, and we was side-by-side, so I was almost training like I was fighting anyway. I was still very light all the way through.”

His thoughts on now working with MTK Global:

“I’ve got to give Tom Stalker a shout out and say thank you to him because he was quite persistent in telling us to come and have a look at MTK and what they could offer. They’ve treated us well. I can only sing their praises, really. If I was to become a trainer or manager or anything like that, I would take them (his fighter) straight to MTK. I think they’re only going to get bigger and bigger. They’ve been straight-talking; no-nonsense. It’s all been spot on. Thanks to them for keeping us in the game for the time being, as long as it lasts.”

“I’m the happiest man alive. I’ve had a really good life, and I feel like I’m winning every day. I feel so lucky to have had the life I’ve had. I’ve experienced a lot; I’ve seen a lot. I’m more than happy with everything.”