Haney DENIES Khan took it easy on him in sparring

By Chris Williams: Devin Haney denies that Amir Khan had to take it easy on him as he maintains he did during their sparring sessions last year. Haney (24-0, 15 KOs) notes that Khan mostly said positive things about him in an interview this week with Fighthype, but his assertion that he had to go easy on him was just not true.

Khan further said Haney is “light” and that he views him as a level below Gervonta Davis. Also, he says Haney isn’t “world-class.” If Khan is serious about Haney not being world-class, then the lightweight division is barren of talented fighters. There’s only a small handful of guys in the weight class that possess talent similar to that of Haney.

Haney says he’s put Khan on his “list” for the comments he made about him. That’s a fight that might be tough to make due to the size differences between the two. Until Haney moves up to 140, a battle between him and Khan is out of the question.

Haney needs to grow more and put on weight before he takes on Khan. With the former IBF/WBA light-welterweight champion Khan now 33, Haney will need to move up in weight as soon as possible to fight him before he retires.

It was a strange interview that Khan gave this week. He started off complimenting Haney, but then immediately took a couple of shots at him by saying he went easy on him in sparring because he’s light. After switching back into the praising mode for a short while, Khan resumed criticizing Haney by saying he’s NOT “world-class” and that he’s a level below Tank Davis.

It’s not surprising that Haney isn’t pleased with some of the things that Khan said about him during the interview, especially if his sparring sessions with him were even affairs.

‘No one knows when it’s over. When it’s over, we’ll see what happens,” said Haney to Fighthype on the Coronavirus pandemic. “I’m preparing for the smoke to clear. He did say a lot of good things, but what I didn’t like was him saying he had to take it easy on me, which was not the case at all,” Haney said in addressing Amir Khan’s comments about how took it easy against him in sparring.

“I went in there, and I gave it my all, and he gave it his all. We got some good work, and I feel like my sparring helped him prepare for Crawford fight a lot, but when he said he took it easy, that wasn’t true at all. I’m close with [Khan’s trainer] Virgil Hunter. They told me they needed me and to come back to work because I was giving Khan all he could handle and more.

“When you’re sparring someone his caliber, you have to bring your A-game, of course. He’s going to bring his A-game for somebody my caliber as well. We both want to get out best work. With our competitive nature, that’s how guys at the top are. No matter who they are, they want to show how dominant we are, and how much skills that they have,” said Haney.

Well, Khan’s trainer Virgil Hunter knows what really happened during the sparring session between Amir and Haney. Don’t expect Hunter to reveal what took place, though, considering that would look one or both fighters to look bad. It already looks terrible for Khan that Haney, a young 21-year-old lightweight, was able to spar him on even terms.

“Of course, I wanted to go in there and impose my will. He [Virgl] didn’t say too much after the sparring other than ‘thank you for the work and everything.’ He has fast hands,” Haney said on Khan. “But to be honest, I’ve never sparred anyone faster than me.

“But Amir does have fast hands. I’ve sparred a lot of fans guys, don’t get me wrong. And I’ve been saying for a while now; speed is nothing without timing. You can be the fastest guy in the world, but if you don’t have timing, then speed doesn’t matter—no disrespect to Ryan Garcia.

“We see him doing all these fast combinations, and sometimes you see him closing his eyes. It looks fast, but the punches may not be correct, or it may not be the correct type of punches. They may be fast, but if you don’t have speed or timing, then you have nothing. I don’t think Lomachenko is the fastest guy out, but he has very, very good timing,” said Haney.

Devin does possess fast hands, but he’s not as quick as Khan. In looking at their recent fights, Khan still looks faster at 33 than the 21-year-old Haney. Khan’s timing isn’t as good as Haney, though, and his punch seemingly isn’t on his level as well.

“Ryan has always been a good fighter,” said Haney about Garcia. “I cannot take that away from him. I always knew Ryan was a good fighter since the amateurs days. Every fight, he was good, and in every match, he was tough. None of those fights were easy.

“When I was younger, he beat me. I think in our first fight, I was 9-years-old, and he beat me. When I started to get older and mature more, that’s when I began to beat him. In our last fight, it was like a war.

“I didn’t have any amateur fights when I was 160. So our last fight was when I was 15. We just got to see. In the pros, we got to make these fights happen,” said Haney.

Devin would likely out-box Ryan if they fought today because the Golden Boy fighter only throws left hooks. Ryan doesn’t have any right-hand power, and his jab is weak.

Ryan Garcia is a Roy Jones Jr. type of fighter that gets by with his hand speed, but who isn’t all that skilled. Once Ryan starts losing his hand-speed, he could have a lot of problems due to his lack of fundamentals. 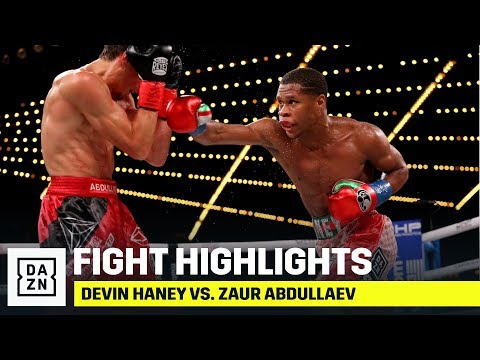