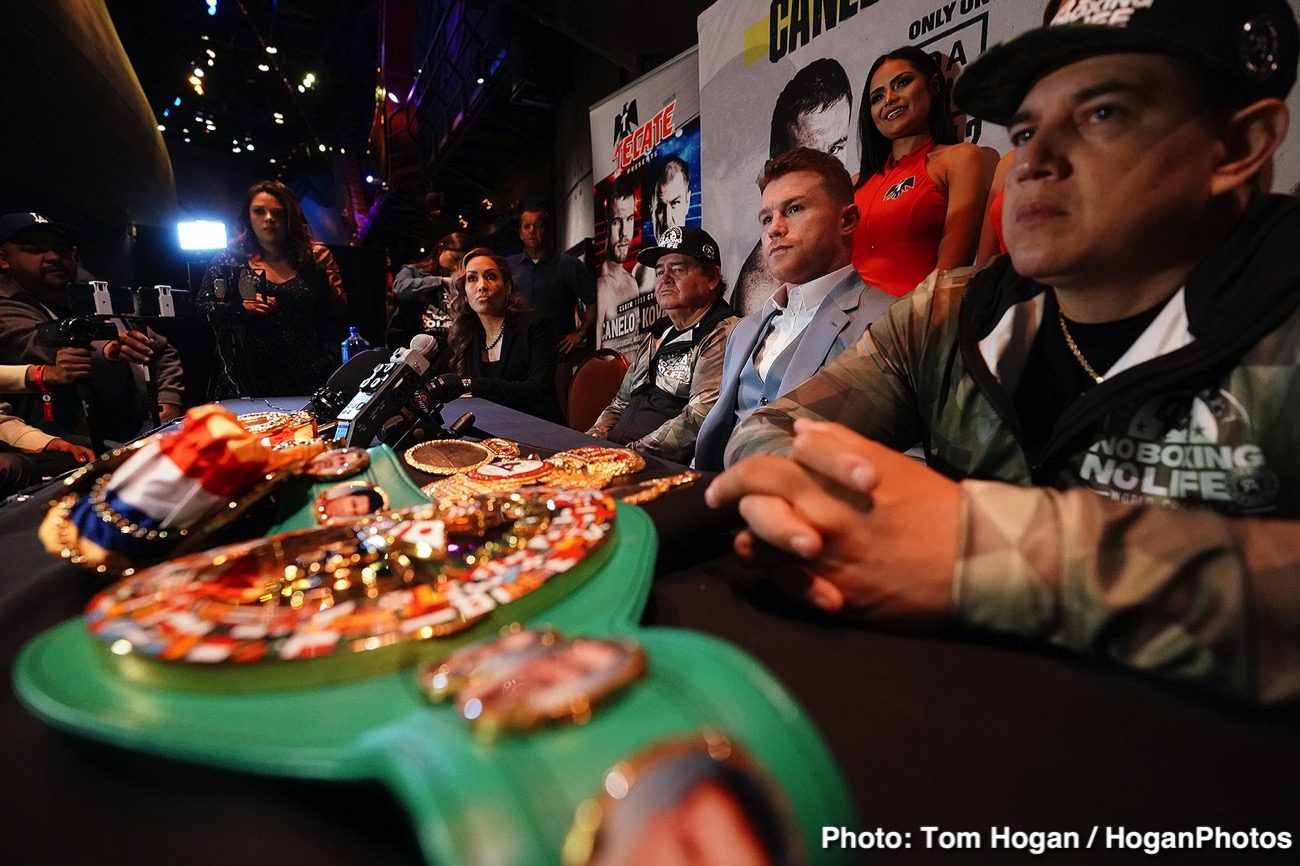 By Sean Jones: Canelo Alvarez won’t be fighting Gennadiy Golovkin this September as fans had hoped what takes place, and things aren’t looking good for him. Golovkin’s trainer Johnathon Banks has already let the fans know that there won’t be a Canelo vs. GGG fight this September or anytime soon for that matter.

Golovkin will be defending his IBF middleweight title for a while, and he may not look in Canelo’s direction until late 2021 or later.

With Golovkin no longer an option for Canelo, that puts Billy Joe Saunders back into the picture.

If Golden Boy Promotions wanted to please the fans, they could pick out a talented fighter for Canelo to face in September.  That means put Canelo in with the likes of Jermall Charlo, Demetrius Andrade, David Benavidez, or Caleb Plant. None of those fighters expected to be under consideration for Canelo’s next fight or at any point in the remainder of his career. Why? Perhaps because they’re risky fights for Canelo, and he could lose to all of them.

The fans from the U.S don’t want to see Canelo fighting WBO super middleweight champion Saunders (29-0, 14 KOs), but he’s the guy that he was supposed to be facing next before the pandemic wiped out sports altogether. Predictably, Golden Boy will pick up the pieces and go ahead with the Saunders fight once boxing resumes.

Ideally, Golden Boy would get a clue to go in a different direction for Canelo’s next fight when boxing returns. Saunders would be a good tune-up opponent for Canelo if he were coming off a loss. Other than tune-up purposes, Saunders is a dreadful opponent for Canelo because there’s no interest from U.S fans in seeing him.

Saunders the frontrunner for Canelo’s next fight

“Canelo Alvarez’s career is on hold as the rest of the boxing world,” said Chris Mannix of DAZN. “Despite not having any fights on the books, Canelo told Box Azteca, ‘In my mind, I’m fighting in September.’ Are you buying that Canelo will be ready to fight in September?”

“Now who he fights, I think is a question too. Golovkin is the opponent that DAZN wants for September, and it’s the opponent that most of us are the most interested in. And we know from talking about in the last show that Golovkin may not want Canelo for his next fight.

“And Canelo may say, ‘You know, I think that I might want to fight Billy Joe Saunders in my next fight,’ and that would push the Golovkin fight even further down the road. I think he’ll be ready. I just don’t know who he’s going to fight.”

“Billy Joe Saunders sounds right, but we want the Golovkin fight,” said Mora in talking about Canelo’s next fight. “We don’t want to wait until May of the following year. We’re waiting too long. Golovkin is 38-years-old. This trilogy needs to happen next. BJ Saunders makes sense, but let’s go straight into the Golovkin fight.” 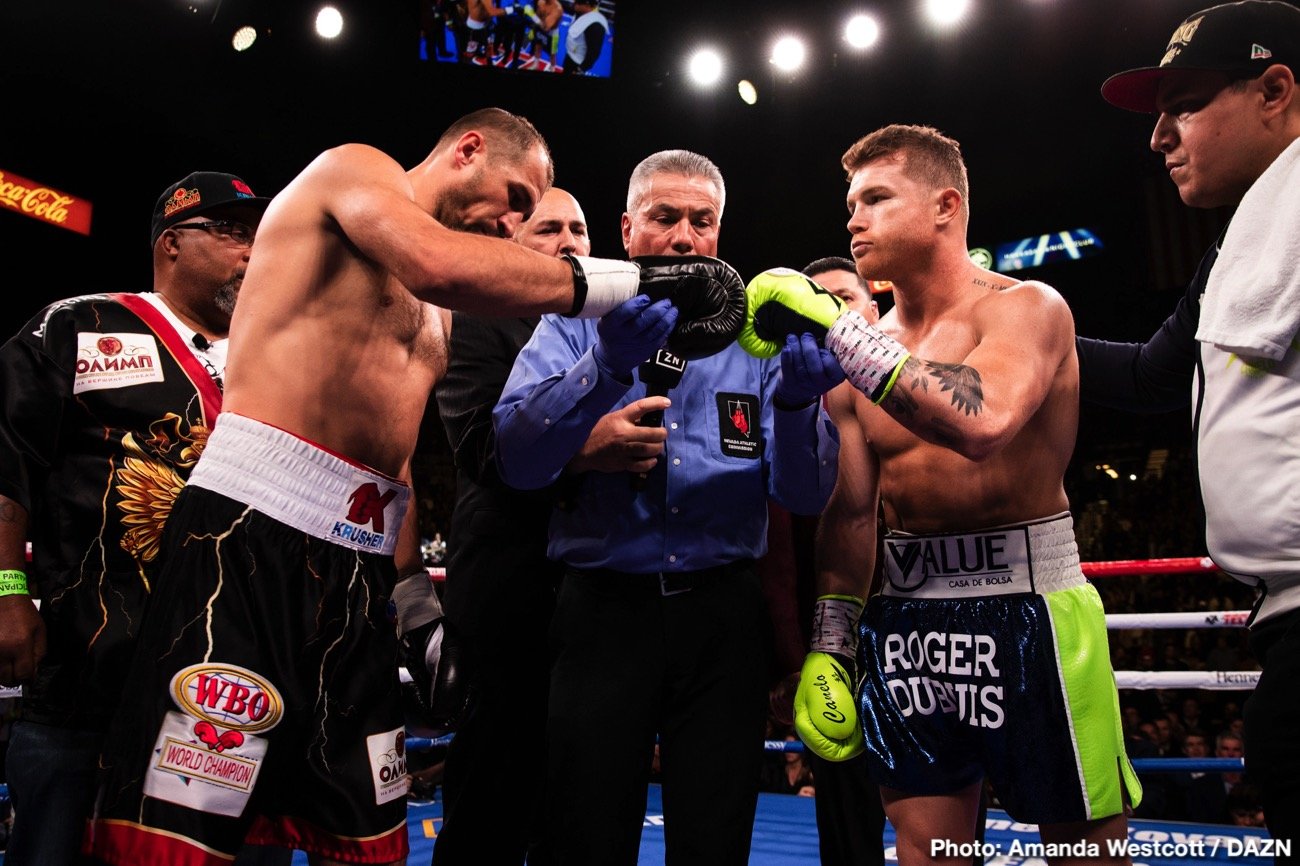 “Canelo is not there yet, is he? He’s improving. You see, his body is breaking down. You see the tape on his knees and his elbows when he’s training. I get that.

While some boxing fans believe Canelo is improving, that may not be the reality. Canelo looks good right now because he’s being matched against guys like Sergey Kovalev, Rocky Fielding, and Daniel Jacobs. He’s not fighting the best in any of the weight classes he’s competing in.

The only way of knowing if Canelo is improving is by matching him against the best. That means instead of Canelo being put with a shot fighter like Kovalev; he needs to face IBF/WBA 175-pound champion Artur Beterbiev.

Will Canelo agree to fight in front of no fans?

“I think Canelo will be ready come September,” said Mannix. “He’s training now in Southern California. He’s not working directly with Eddy Reynoso, but he’s still in the gym. Once he’s allowed to get back to full-scale training, I don’t think it’ll be any impediment in him fighting in September.

“I do think the questions are twofold. One, as you said, will Canelo accept fighting in front of no audience or maybe at best, a small audience. I just don’t see the type of crowd that Canelo is used to. Ten, fifteen to twenty thousand person crowds populating events in time for a Golovkin fight or any opponent in September.

“We celebrate in Las Vegas, and it was Canelo on May 5th and in September in the 2nd week,” said Sergio Mora. “It was always Canelo. Of course, he’s going t be ready. He’s Mexican, and he’s going to stay prepared. He can’t wait to get back into the ring.

“The question here is after this pandemic is over and this quarantine is lifted will people want to go around and fill arenas and go around people and be in the environment. That’s the real question. Whether Canelo will be ready to fight. This is the pound-for-pound #1 fighter in the world. He doesn’t get ready. He stays ready.”

It’s highly unlikely that Canelo will agree to fight without fans present, as it would be too much of a money loss. Lightweight contender Ryan Garcia tends to be packaged along with Canelo.

“At this point in Canelo’s career, he’s only 29-years-old, and he’s only lost one time in his career, and that was against the best fighter in our era in Floyd Mayweather,” said Mora. “Hands down, he [Canelo] can retire right now, and he would be a shoo-in for the Hall of Fame and be a Mexican legend. Should he retire, or will he retire?

“No. I mean, he hasn’t gotten beaten up, he’s making boatloads of money, and he just signed the richest contract in boxing sports history. He still has got everything going for him, and he’s still firing on all cylinders. So, yes, he can still fight until he’s 36 or 37 until someone proves him wrong.

It’s easy not to take beatings in your fights when you’re fighting the likes of Rocky Fielding, 36-year-old Sergey Kovalev, and a timid-looking Daniel Jacobs. If Canelo isn’t going to face risky opposition, then he can probably hang well into his 40s.

At some point, Canelo will be marginalized by the smart boxing fans, who understand how he’s being consistently matched, and they won’t take him seriously. Fans aren’t stupid. They know when a fighter is being put matched nobodies.

The casual fans tend to follow what the hardcore fans are interested in, so Canelo won’t be able to get away with another ten years of fights against the likes of Fielding, Kovalev, and Amir Khan. 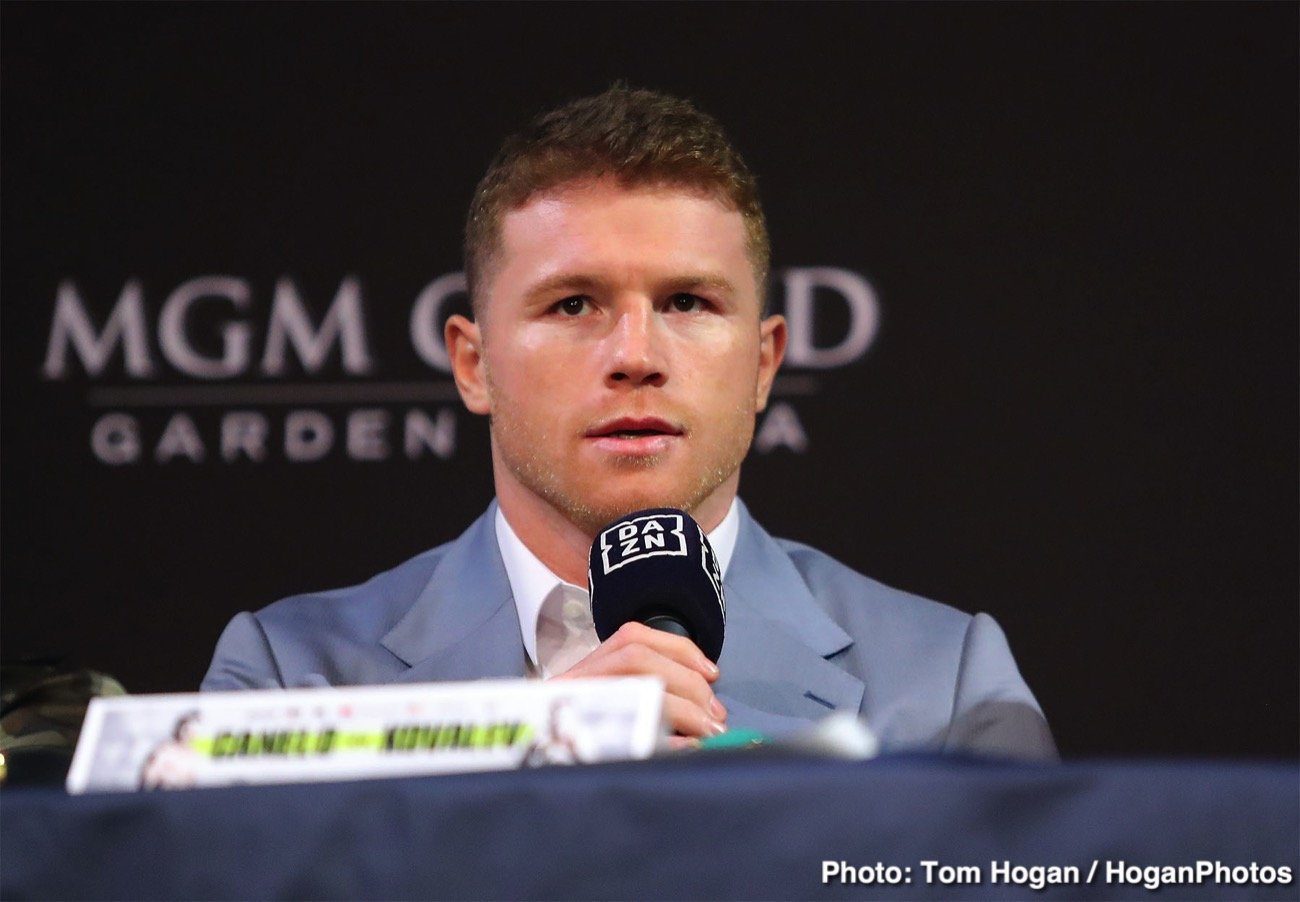 Does Canelo already have one foot outside the door?

“His offense is his defense, but his head movement is getting better,” said Mora. “With that and his maturity and experience and the fact that he’s the best fighter in the world, I can easily see him fighting into his mid-30s, especially if he has his hunger. The hunger is all that matters, and it seems like Canelo is not losing or lacking that.”

“I think it’s kind of pointless to put a clock on your career if you’re a fighter,” said Mannix. “I remember Roy Jones back in the early 2000s, repeatedly saying that he didn’t want to be in the game more than two or three more years. He turned down a massive contract from HBO because he didn’t want a contract that extended as long as they offered to him.

“So we last saw Roy Jones fighting a few years ago, still fighting into his 40s. I don’t put much stock in fighters saying they’re going to retire, most notably because fighters don’t retire, boxing retires them. I mean, there are a few exceptions to that rule, Floyd Mayweather being a most recent one.

Look at the opposition Canelo facing now. He hasn’t fought anyone that the boxing public has wanted him to face since 2018 when he beat Golovkin by a controversial decision. He’s taking on beatable guys now in what appears to be a move to extend his career.

These are the fighters Canelo SHOULD be fighting:

There’s VERY little chance that Canelo will be fighting any of those fighters other than Golovkin for the remainder of his career. Instead, the names that are being mentioned for Canelo are Saunders, Ryota Murata, and Jaime Munguia. Those are soft opposition.

It may not be Canelo’s decision when to retire

“Even Bernard Hopkins, who was fighting into his 50s, he didn’t think so much as retire, but Sergey Kovalev and Joe Smith retired him. It makes for an interesting talking point to put a number on Canelo’s career, but I think he can keep going as long as he’s at a high level.

“The question will be, can he give it up when he’s no longer at that high level? We saw that Ali couldn’t give it up. De La Hoya probably gave it up at the right time, though he flirted with a couple of comebacks. There have been many fighters that have not been able to give it up after boxing has already given up on them.”

It’s utterly predictable that Canelo will retire as soon as he starts taking losses one after another. That may happen at 36 or 37 to fit in with Canelo’s planned retirement schedule, but it also could happen much earlier.

If Canelo is going to be serious about his career and try to face the opposition that the fans want to see him fight, then there’s NO way he’s going to make it to 36 or 37 before he’s forced to retire.

You can compare it to an NFL team playing a team with an 8-8 season record. Canelo isn’t being put in against opposition that exposes him like Jermall Charlo, Artur Beterbiev, Dmitry Bivol, David Benavidez, or Callum Smith.

Canelo making too much money to retire

“That’s the thing. Legends die hard, especially in boxing,” said Mora. “That hunger, we always think we have one more fight in us. That’s the beauty of fighters. That’s why we have people like you, who live vicariously through us. Our hunger exceeds our reach, or however that expression goes. Our eyes are bigger than our stomachs.

“Pick an expression, that’s us. We want to continue fighting. We always believe we have one more fight in us. And, not to mention, when you’re making $30-40 million a fight, of course, you’re not going to want to retire because where else are you going to make that kind of money? As long as you’re not taking punishment and physical beatings for that kind of money, you can fight until your 40.

“You mentioned Ali; you mentioned Holmes and all these other great fighters. They were taking physical punishment. They may not have been getting knockouts, but they were getting beatings against the ropes and getting hit often. Even [Bernard] Hopkins was, especially in that Joe Smith fight.”

One reason why Canelo will be able to extend his career to 36 or 37 is the match-making that’s being done for him. He’s not taking a lot of risks since his hard fight with Golovkin in 2018, and the pattern of soft match-making will likely continue. What’s predictable is that once Canelo gets beaten, Golden Boy will extra careful to make sure he doesn’t get beaten again.

The way to do that is for them to steer Canelo towards soft targets that present little threat to beating him. Unfortunately, we’re already seeing that with Canelo fracking Rocky Fielding, Sergey Kovalev, and matched against Billy Joe Saunders. Those are all soft targets, and obviously, fighters that were picked carefully in a calculated manner.

Johnny Nelson: ‘Tyson Fury tried to take my head off in sparring’ »