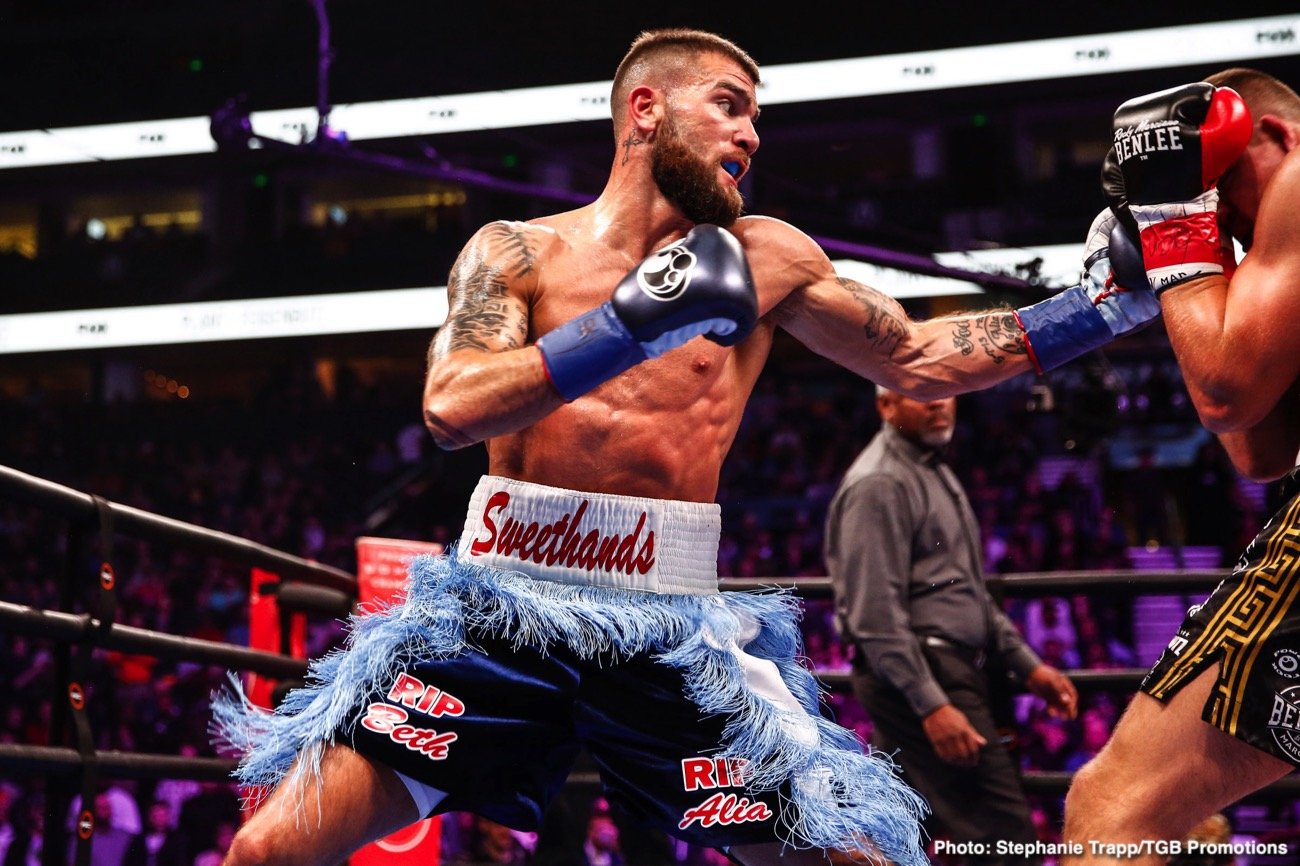 By Allan Fox: Caleb Plant says he would give Daniel Jacobs a boxing lesson if they were to ever fight, but he doesn’t see the two of them ever facing each other.

Although Plant states that he would “love” to fight the 33-year-old former two-time middleweight champion, Jacobs, he doubts it can happen due to them fighting for different network platforms. Jacobs is with DAZN, whereas Plant fights on FOX Sports.

IBF super middleweight champion Plant (20-0, 12 KOs) lashed out at Jacobs (36-3, 30 KOs) this week in response to a recent comment from the New Yorker in saying that he viewed him as beatable and vulnerable.

Plant says the only way he sees a fight between him and Jacobs taking place is if he becomes a “mega-star.” He doubts that Jacobs has the talent to become a star with the time he has left in his career. Jacobs will be turning 34 in February, and he’s already lost three times in defeats against these fighters:

Jacobs believes that he fought well enough to deserve victories against Canelo and Golovkin; the judges saw it differently than him. He didn’t do enough to get the wins against those two due to the timid manner that he fought in the first six rounds of both fights.

Plant: Jacobs isn’t on his way up

“Danny Jacobs is a good fighter, and he’s been around for a while, but he’s more of an athletic fighter,” said Plant to IFL TV. “He fights more off his athletic ability. When you have two or three times in a fight where someone is making you miss seven or eight punches in a row.

“You have someone who is an offensive fighter, who you’re making look like Pernell ‘Sweetpea’ Whitaker,’ I don’t think Danny Jacobs is the kind of man for the job. Do you know what I’m saying?

“He’s been in some tough fights,” continued Plant in criticizing Jacobs. Not everyone is an A-class fighter now. But as they go through their career, they continue to get better and better, and they turn into an A-class fighter.

“Recently, he was saying my name and talking about how beatable I am, but as of now, I’m undefeated. Out of the two of us talking, you’re the only one that’s been beaten,” said Plant in pointing out that Jacobs doesn’t have an undefeated record.

There’s no question that Jacobs isn’t on his way up in his career. If anything, he’s already starting to head downward after 13 years as a professional. Jacobs didn’t do enough to beat Canelo, and he’s outgrown the 160-pound weight class.

With the way that Jacobs is talking about wanting to take on journeyman Gabe Rosado (25-12-1, 14 KOs) in his next fight, he could fritter away the last bit of his prime.

Jacobs is OLD and on his way out – Plant

“With him [Jacobs] being with another promotional company, we all know that if there’s two guys fighting on two separate companies that for them to fight, it has to make sense for the two companies,” said Plant.

“That means these two guys have to be two mega-stars that are making enough money for each company for them to fight.

But me and him [Jacobs] can’t do that. By the time that I do become a mega-star because I will, he’s already messed it up. He’s not a mega-fighter, and we can’t have a mega-fight. You’re OLD, and you’re on your way out. They’re not going to let that happen.

“If you would have stayed undefeated, then we would have been able to do that. So the fight that he’s asking for, he’s the one that messed up the fight.

“He can have this fight because I would love to fight him. I’ll put a boxing lesson on him,” Plant said in getting worked up emotionally in talking about Jacobs.

The main problem with Jacobs and Plant potentially fighting is that neither of them are popular enough for a clash between them to take place on pay-per-view. As such, DAZN and Fox Sports likely won’t be excited about the idea of splitting their audience with a Jacobs vs. Plant fight.

Even if the fight were to take place on just one network, it still wouldn’t bring in huge numbers. Jacobs is a good fighter, but he has a history of losing each time he steps up against quality fighters.

Given Jacobs’ past failures, he’s not must-see TV. Jacobs is a guy that beats the bottom feeders and mid-level fighters, but he doesn’t do enough when he faces the best.

“I would love to fight him, and I would fight him in a heartbeat,” said Plant on Jacobs. “But I can promise every one of you all right now, they’re not going to let us fight because he’s not a mega-star, so they’re not going to send him over to FOX Sports. “Fingers crossed then,” said Plant when told that there’s a possibility Jacobs could still fight him due to him being with Al Haymon.

It would be good if Jacobs and Plant face each soon, but it’ll be pointless if it takes place in 3 to 6 years. Jacobs will be shot to pieces by that point, and it won’t be enjoyable. He’s not another Floyd Mayweather Jr. or Bernard Hopkins to be fighting into his late 30s at a high level.

Jacobs is too old to be wasting what youth he has left fighting journeyman fighters like Rosado instead of going after the cream of the crop at 168.

The guy that boxing fans want to see Plant fight is WBC super middleweight champion David Benavidez. The two of them have been trash-talking forever, and they’re both young and world champions. That’s who Plant SHOULD be trying to fight instead of Jacobs.