Top Rank to fly Naoya Inoue to U.S next week for April fight 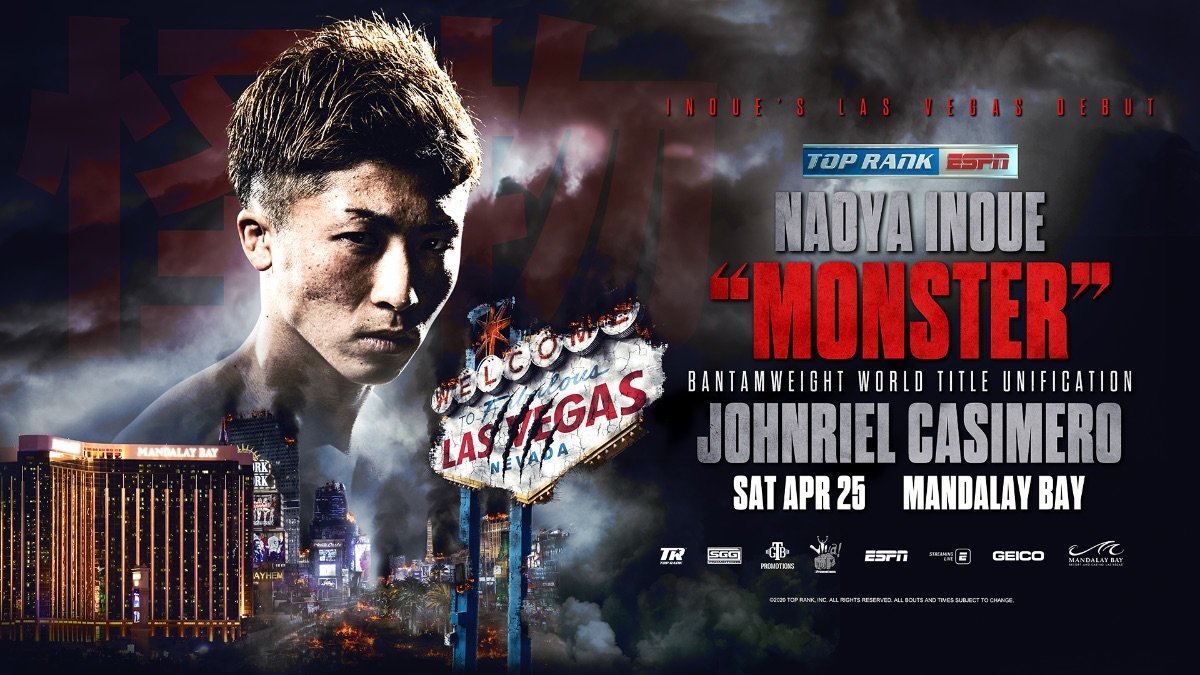 By Matt Lieberman: In a preventative measure due to the coronavirus outbreak, Top Rank promoter Bob Arum is planning on bringing Naoya Inoue over to the U.S next week ahead of his unification fight on April 25 against John Riel Casimero.

With the fast spread of coronavirus in Japan, Arum isn’t taking chances that IBF/WBA bantamweight champion Inoue (19-0, 16 KOs) winds up falling ill and misses his unification match against WBO champion Casimero (29-4, 20 KOs).  Inoue and Casimero are fighting on the 25th of April on ESPN at the Mandalay Bay Resort & Casino, in Las Vegas, Nevada. Arum has a promotional deal with the 26-year-old Inoue.

Khongsong to fly into Scotland early for Taylor fight

In addition to bringing Inoue over early for his fight in April, Arum is also having Thailand fighter Apinun Khongsong fly into Scotland for his May 2 title challenge of IBF/WBA light-welterweight champion Josh Taylor in Glasgow. Arum promotes the unbeaten Taylor (16-0, 12 KOs).

IBF mandatory Khongsong has already been tested for the coronavirus in Thailand, and he’ll be flying over to Scotland on Friday for his May 2 title shot against Josh Taylor in Glasgow.

“Obviously, everybody in boxing who does international fights is concerned,” said Bob Arum to ESPN.com. “we’re going to immediately bring him and his family to Las Vegas.”

Top Rank already recently canceled a scheduled fight between WBC/WBO light-welterweight champion Jose Ramirez and his WBC mandatory Viktor Postol for February 1 in China due to the coronavirus outbreak in that country. The Ramirez vs. Postol fight has been rescheduled for the 9th of May in Fresno, California.

When Top Rank originally scheduled the Ramirez-Postol fight for China there were a lot of boxing fans wondering why they would stage the fight in that country. Ramirez is from Southern California, and that’s where his fan base is. Staging the fight in China made zero sense.

For his part, Postol is from Ukraine, and his fan base isn’t in China. Perhaps the fight would have made more money in China, but obviously too risky to place it there given the health concerns.

This could be tough on Top Rank to have some of their overseas cards staged back in the U.S, but it’s better safe than sorry. Until the coronavirus problem goes away, it’s likely that Top Rank will choose to stage their fight cards in the U.S.

Inoue is coming off of an exiting 12 round unanimous decision victory over Nonito Donaire on November 7 in Japan. The two fought in the final of the World Boxing Super Series tournament, and it was a superb fight with both guys putting on great performances.

Donaire would like a rematch with Inoue, but that’s not in the cards right now. If Donaire (40-6, 26 KOs) beats WBC bantamweight champion Nordine Ouabaali and Inoue defeats Casimero, then the two will fight in another unification match.


« Kownacki could get Andy Ruiz fight if victorious against Helenius