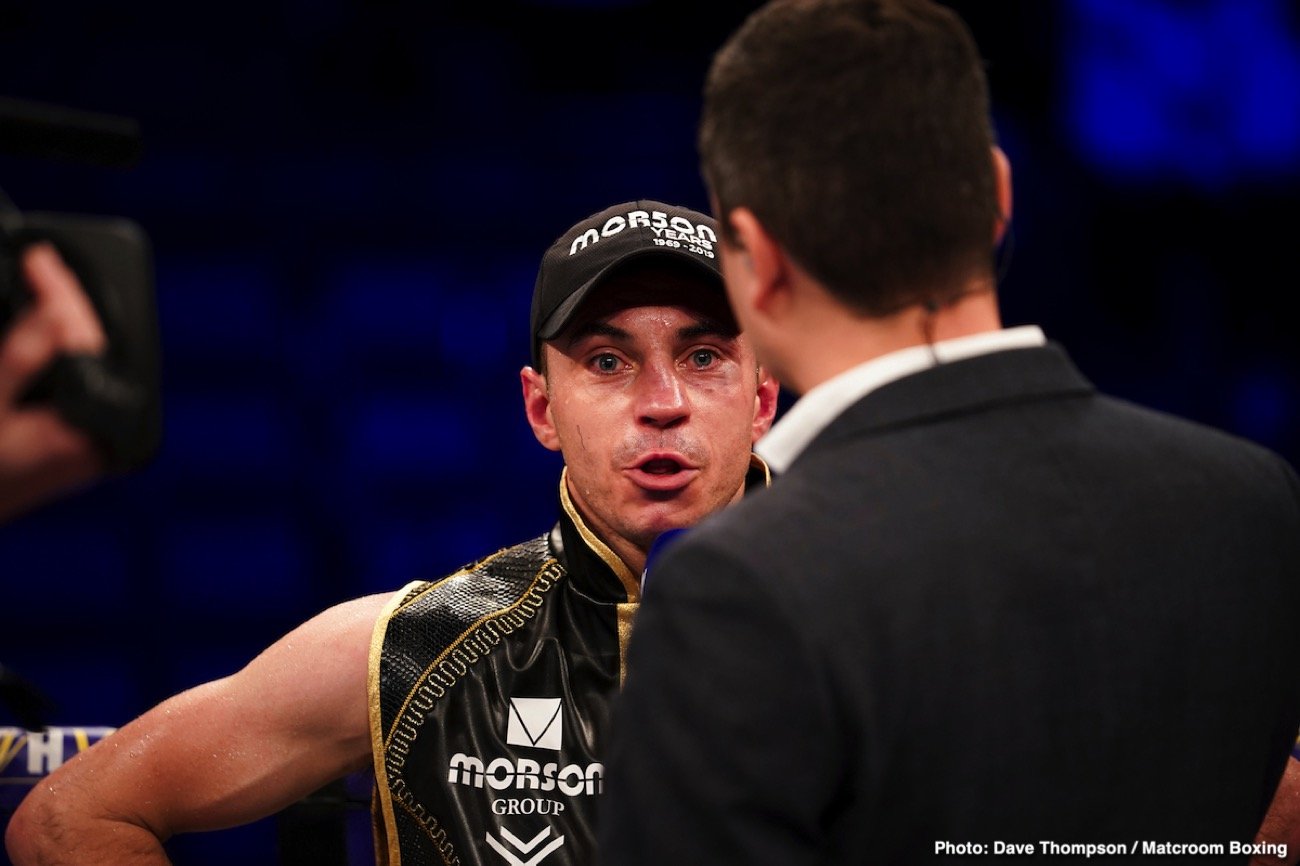 Quigg said, “I couldn’t pull the trigger” on his shots. He says he saw the openings, but his ability to fire off his shots wasn’t there.

Quigg, 31, came into the fight as the favorite, but he didn’t possess the hand speed, timing or the skills to cope with the younger fighter Carroll’s game.

In the end, Quigg’s trainer Joe Gallagher opted to throw in the towel in the ring in the 11th to have the contest stopped after Scott had been badly hurt from a right hand by Carroll.

Quigg said after the fight, that he believed that he would have beaten the 27-year-old Carroll had he fought him 3 to 4 years ago when he was still at his best, but he no longer had it. Going into the Carroll fight, Quigg had said that the match was a “must-win’ match, which suggested that he was going to retire if he lost.

Even though Quigg hadn’t fought since December 2018, he said he’d been training in the gym all that time, and his to Carroll wasn’t due to his inactivity.

Quigg: I couldn’t pull the trigger

“Just go and try to put some pressure and let the hands go,” said Quigg when asked what his trainer Joe Gallagher had told him in between rounds. “When I was letting my hands go, I probably looked like I was swinging at people in the crowd. I’m a realist. I don’t kid myself. And I was trying to throw single shots, and he usually wasn’t there,” said Quigg.

The speed and movement of Carroll would have given Quigg problems even had the fight taken place 3-4 years ago. But in looking back at Quigg’s last great performance against Jose Cayetano in December 2016, it’s hard not to believe that he would have been too much for Carroll. Quigg was a different fighter back in 2016 than what we saw last Saturday against Carroll.

The hand speed, timing, and reflexes wasn’t there. Perhaps too many ring wars for Quigg in training for his fights, as well as the punishment that he took in his two career defeats against Oscar Valdez and Carl Frampton.

Quigg looked a lot better when he fought at super bantamweight [122] than he has since moving up to 130. That obviously is a factor in why Quigg isn’t the same guy.

“I wasn’t going to find that shot,” said Quigg on his inability to land a big punch to get him the victory over Carroll. “I was missing wildly, and I wasn’t going to pull it out of the bag. No,” said Quigg when asked if he’ll take some time out and think about what direction he wants to take his career. “I’m a realist. Three years ago I would have had no problems with him.

“I said when I stop improving and stop getting better, that’s the day I’ll be stopping,” Quigg said. “People might say, ‘Don’t make any rash decisions.’ I said before that this is a ‘must-win fight.’ I’d been out of the ring since October 2018. I didn’t fight all last year. The time was irrelevant. It didn’t make any odds. I trained, I was in the gym and did what I needed to do, but being in the gym and fighting is totally different.

“In real-time, I was way out; timing, distance, everything, way out. So I’m not going to kid myself, unfortunately for me,” said Quigg. “I think that’s it. And I think it’s too dangerous of a sport to just stay in it, to make the numbers up, and be a stepping stone for a young kid coming through, an up and comer.

“I gave it everything. So I’m not just going to stick around. I’ve sacrificed a lot. If it’s not there, it’s time to enjoy life. I’m at peace because I couldn’t give any more in my career. I’ve not done bad. I would have liked to have achieved more,” said Quigg.

You could tell from watching Quigg that he’s deeply upset at calling it quits after 13 years as a professional. He’s poured his life into the sport, captured a world title, and is at the end at a still relatively young age at 31.


« Oleksandr Usyk vs. Dereck Chisora to be announced next week for May 23 at O2 Arena in London

Is the heavyweight division thriving? »