Oleksandr Usyk vs. Dereck Chisora to be announced next week for May 23 at O2 Arena in London

By Charles Brun: Eddie Hearn will be making an official announcement for the Oleksandr Usyk vs. Dereck Chisora fight next Friday in London for May 23 at the O2 Arena. This is a big test for the former unified cruiserweight champion Usyk (17-0, 13 KOs) before he challenges for a world title in 2021 against WBO heavyweight champion Anthony Joshua.

Hearn chose not to announce the Usyk-Chisora fight officially last Saturday during the Scott Quigg vs. Jono Carroll broadcast on DAZN and Sky Sports for some reason. He did make an unofficial announcement to tip off the hardcore boxing fans about the match-up.

Usyk doesn’t possess the size or the power to stand and fight Chisora in a slugging match, so this is a fight that could see a lot of movement from the Ukrainian.

The 33-year-old Usyk didn’t look good in his last two fights against Chazz Witherspoon and Tony Bellew, and it’s pretty obvious that he’s not destined to be another Evander Holyfield at heavyweight.

Hearn didn’t say whether Usyk vs. Chisora will be shown on Sky Box Office pay-per-view, but it’s likely that’ll be the case. Boxing fans in the UK won’t be overjoyed at watching two non-world champions fight on PPV.

Usyk isn’t a big name yet in the UK, and former world title challenger Chisora is more of a gatekeeper level heavyweight at this stage in his career. It’s early yet for Usyk to be fighting on pay-per-view in the UK, and Hearn might be risking an angry backlash from fans if he does choose to go that route.

Ideally, Usyk needs to be seen on regular on Sky first by the casual boxing fans so they take an interest in watching him. If Hearn chooses to put Usyk on Sky Box Office PPV straight away, he’d have the cart before the horse in terms of slowly building his fan base.

Although Usyk is a 2012 Olympic gold medalist like Joshua, but he’s NOT from the UK, and his fighting style is more of a spoiling type. Usyk’s fighting style is similar to Billy Joe Saunders with the way he moves and boxes his opponents.

Usyk is likely going to stay on his bike the entire fight and pick the slow-moving Chisora apart the way he did against Michael Hunter.

Usyk vs. Chisora to be announced next Friday in London

“It’s been a long process because it’s a fight that we’d hoped to make March 28,” said Hearn of the Usyk vs. Chisora fight. “He’s in camp now, Usyk. There’s going to be a press conference on Friday in London, probably for the fight [Usyk vs. Chisora] that we’re discussing,” said Hearn to after the Bell.

“I just can’t wait because, for me, Usyk-Chisora is just a great heavyweight fight. All the questions we don’t know about Oleksandr Usyk, anyone that said about the fight with Chazz Witherspoon, ‘He looked a little bit uncomfortable when he was getting lent on, and a couple of shots flew in. He didn’t look comfortable with it. Chisora is going to work-him every single second,” said Hearn on the Usyk vs. Chisora match-up.

This is a fight where the 2012 Olympic gold medalist Usyk (17-0, 13 KOs) show the boxing world whether he deserves to be fighting for a world title against Joshua, as there are a lot of fans that think otherwise.

What bothers some fans is the WBO gave Usyk the mandatory spot at heavyweight BEFORE he’d ever fought in that weight class.

The 33-year-old Usyk didn’t have to strive and work hard to earn the mandatory position like most heavyweights. It was given to him based on him being the WBO cruiserweight champion.  Since then, Usyk has had one fight at heavyweight in beating 38-year-old Chazz Witherspoon by a 7th round stoppage last October in Chisora.

Usyk will be under constant pressure from Chisora

“The great thing is, we know that Chisora is going to be out-skilled in that fight, but Usyk is not a notoriously fast starter,” continued Hearn in talking on the Usyk-Chisora fight. “If ‘Delboy’ can find his way into the fight through 4, 5, 6 rounds, lean, smother and do whatever he has to do against Usyk, we don’t know how he’s going to react to those kinds of guys that are 17, 18 stone coming in.

“Chisora is an animal. But he’s [Usyk] got to be in that fight for four, five rounds, and do what he does best, which is find his way into the fight, and go from there. But May 23 at the O2 Arena, there will be an official announcement this week,” said Hearn on the Usyk vs. Chisora fight. “It’s going to be a monstrous night of boxing, and a heavyweight fight that I think a lot of people are going to be interested in,” said Hearn.

Usyk looked both good at bad in that fight. While Usyk ultimately was able to stop the faded Witherspoon, he was hit a lot, marked up, and he looked slow at 215 lbs. For that fight, Usyk bulked up a little, and the extra weight slowed him down without giving him additional power. His stoppage over Witherspoon was based on his volume punching, and not his power.

Chisora (32-9, 23 KOs) won his last three fights since losing to Dillian Whyte by an 11th round knockout in December 2018. Dereck has looked good in his last three contests, but he’s been fighting lower-level opposition designed to build him back up. Chisora’s power is still there, as we saw in his recent 4th round knockout of journeyman David Price, but he’s very slow and hittable. 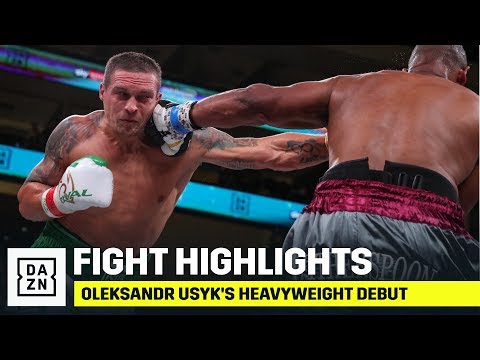