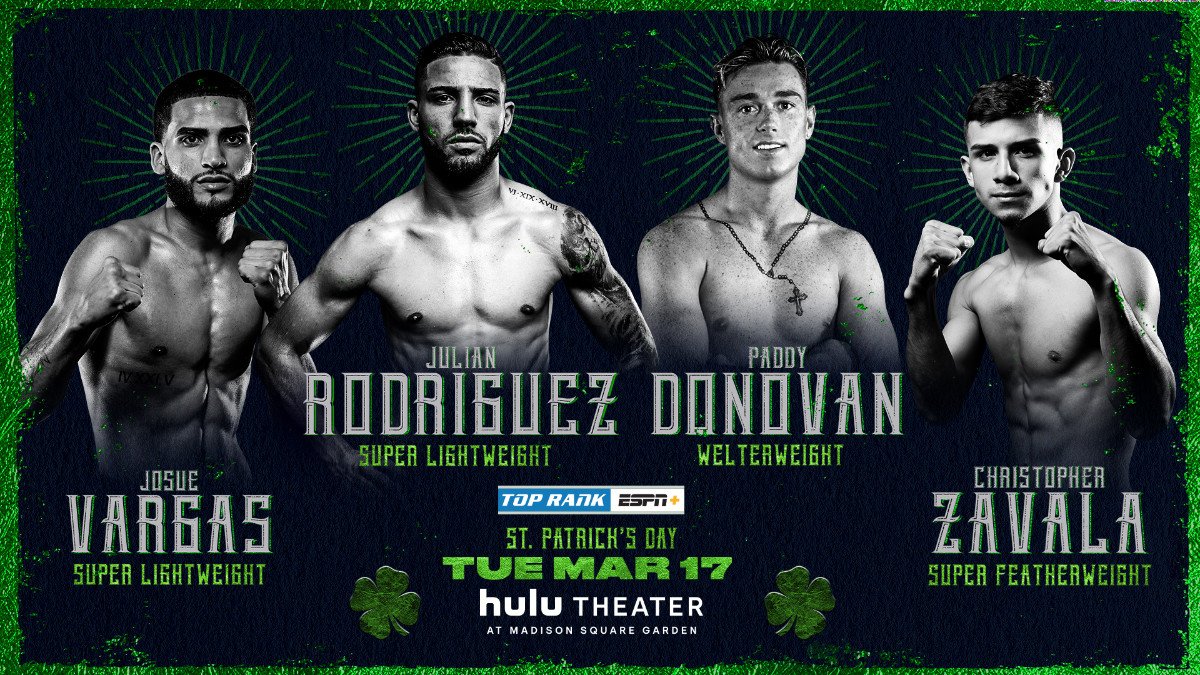 Josue “The Prodigy” Vargas will make the first defense of his IBF North American 140-pound belt Tuesday, March 17 against Salvador Briceno in a 10-rounder. Vargas (16-1, 9 KOs), from the Bronx, N.Y., has won 10 consecutive bouts since an October 2016 disqualification defeat. Briceno (17-5, 11 KOs), from Guadalajara, Mexico, has won two of three since pushing undefeated prospect Gabriel Flores Jr. the distance last June in Reno, Nev.

Vargas-Briceno, along with the returns of top prospects Julian “Hammer Hands” Rodriguez, Paddy “Real Deal” Donovan and Christopher “The Boy” Zavala, will stream live on ESPN+ starting at 5 p.m. ET.

“I’m excited to be fighting in my hometown on such a stacked card,” Vargas said. “It’s an honor to defend my belt in front of my friends, family and biggest supporters. I can’t wait for another spectacular fight night and to put on a show for everyone who will be watching on ESPN+.”

Rodriguez (19-0, 12 KOs), the fighting pride of Hasbrouck Heights, N.J., will face former top prospect Dannie Williams (24-3, 18 KOs) in an eight-rounder at super lightweight. Rodriguez fought three times in the last five months of 2019 after nearly two years out of the ring due to assorted injuries. Williams, from Saint Louis, returned to the ring last April following more than five years away from it. He last fought in January, notching a 10-round decision over Andre Keys (12-1 at the time).

“I can’t wait for my U.S. debut. I learned so much from training alongside Tyson Fury recently,” Donovan said. “I’m taking that experience into this fight. Thank you to Top Rank for putting me on this card. Conlan’s St. Patrick’s Day cards are always exciting, and I’m happy to be part of the festivities.”

In other action on the undercard stream:
Feargal McCrory (11-0, 5 KOs), one of Ireland’s top young prospects, will make his United States debut against the durable Juan Tapia (9-3, 3 KOs) in a six-rounder at super featherweight. Tapia, who has fought the likes of current WBO featherweight world champion Shakur Stevenson, has never been knocked out as a pro.

Matthew Tinker (2-0, 2 KOs), from Scarborough, England, will face Esai Herrera (2-1, 1 KO) in a four-rounder at light heavyweight. Tinker has scored a pair of first-round knockouts to begin his career.
Promoted by Top Rank, tickets priced at $200, $100, $70, $40 and $30 (not including applicable fees) are on sale now. Tickets can be purchased at the Madison Square Garden Box Office, all Ticketmaster outlets, Ticketmaster charge by phone (866-858-0008) and online at www.ticketmaster.com or www.MSG.com.


« Canelo on Saunders fight: ‘I will be first to annouce it when it’s official’

Deontay Wilder willing to meet with George Foreman to talk »