Israel Vázquez vs. Rafael Márquez to re-air on SHOWTIME on March 28 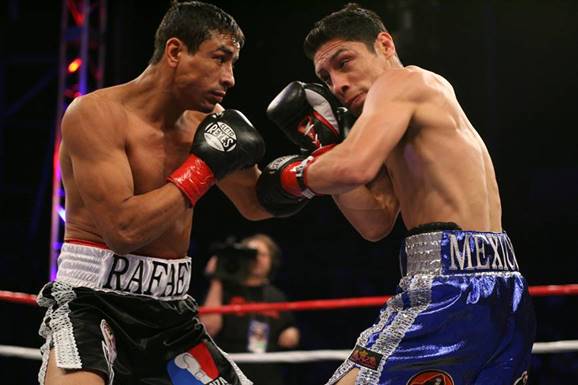 SHOWTIME Sports will delve into its rich archive of historic boxing events to re-air the epic Israel Vázquez vs. Rafael Márquez trilogy this Saturday, March 28 at 10 p.m. ET/PT on SHOWTIME. The telecasts will also be available via the SHOWTIME streaming service and SHOWTIME ANYTIME®.

The fierce Mexican rivals squared off in three consecutive award-winning fights which aired live on SHOWTIME in 2007 and 2008 before meeting for a fourth and final time in 2010. The first three bouts were all contested with the WBC Super Bantamweight World Championship on the line.

Described by the network’s Hall of Fame analyst Steve Farhood as, “an explosion of artistic brutality,” Vázquez-Márquez I was a unanimous selection for 2007 Fight of the Year and left the fans and fighters clamoring for a rematch. The two warriors delivered yet again in their second meeting just five months later in another bloody slugfest that produced a Round of the Year winner and a result that demanded a rubber match. Vázquez-Márquez III, contested just 363 days from their first meeting, was the only match in the rivalry to go the distance and was named the 2008 Fight of the Year.

During Saturday night’s re-airing of the trilogy, combat sports analysts Luke Thomas and Brian Campbell will host a live episode of the duo’s popular digital talk show, MORNING KOMBAT WITH LUKE THOMAS AND BRIAN CAMPBELL on the Morning Kombat YouTube Channel. Thomas and Campbell will watch and react to the fights in real-time and conduct a Q&A session with fans.

“We all knew the first fight would be great, and it more than lived up to expectations,” said Bernstein, who called all four fights. “The second fight was exciting, and when fight three came, I didn’t think they could top Nos. 1 and 2, but they did just that. It’s one of the top five fights I’ve ever announced or seen. The ebb and flow was tremendous, and you almost felt it didn’t matter who ended up getting the decision because they both had been so great. I can’t admire two boxers more than these two men.”

Fans new to SHOWTIME® who sign up through the recently announced 30-day free trial before May 3 can watch these fights, the network’s original series, documentaries, specials and movies online via the SHOWTIME streaming service on SHOWTIME.com or the SHOWTIME app, available on all supported devices.