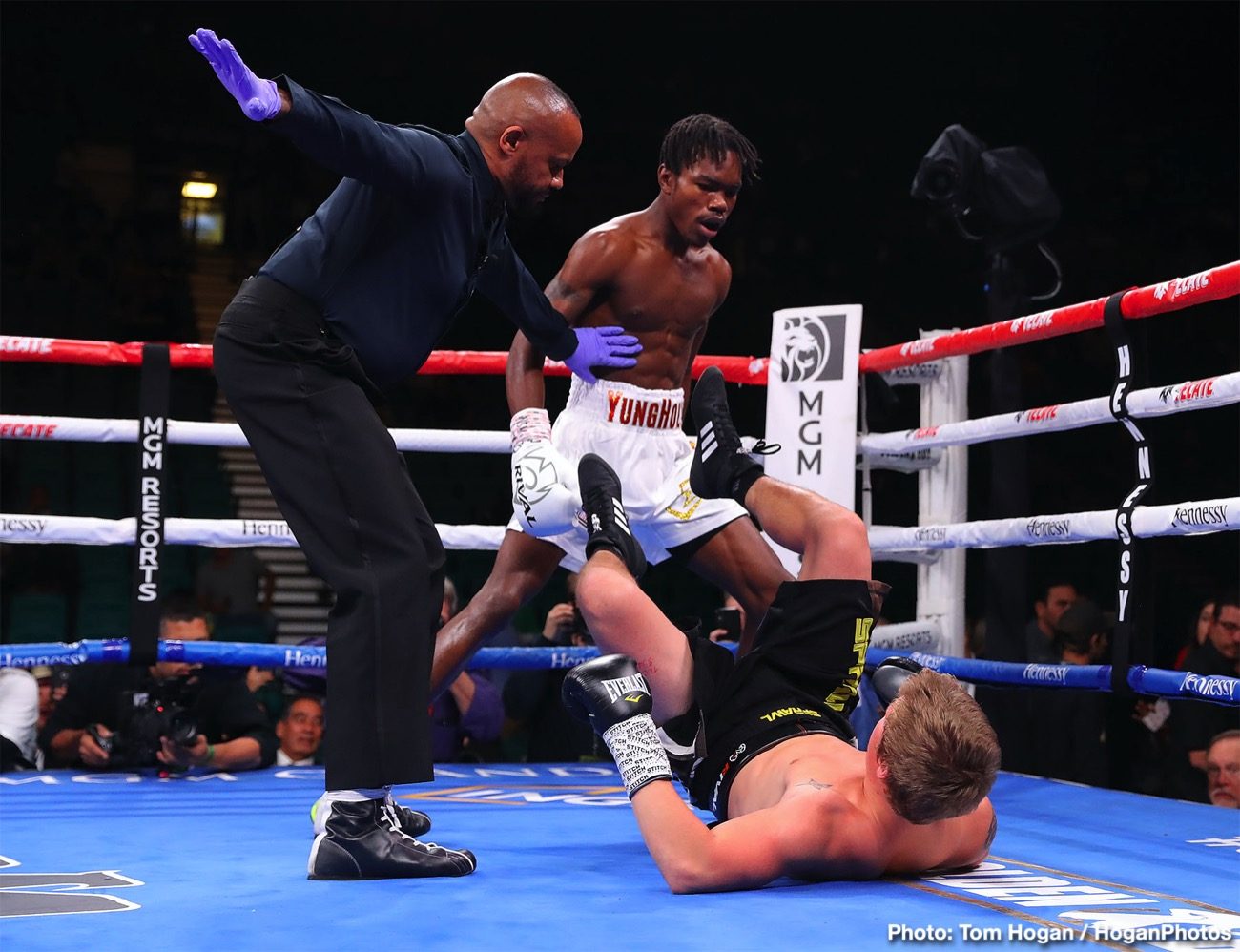 Evan “Yung Holy” Holyfield (3-0, 3 KOs) made his professional debut on November 2, 2019, and will fight his fourth fight tonight, Saturday, March 7, against Dylan Carlson at the Toyota Music Factory in Irving, Texas. Evan’s Head Coach Termite Watkins and his father Evander Holyfield discuss the process of the super middleweight, in which Evander’s take always leads to a story.

We definitely want the fights to go longer (:16 KO, round 3 KO & 1:22 KO respectively), that’s where we get the experience but the main thing is we want him to learn the ring. This fight we have tomorrow the guy has one win and one draw (Dylan Carlson, 1-0-1, 1 KO) – Evan has 3 fights. It should be somewhat of an equal match. Then next time we will pick it up a little more and I’d like to find someone that has maybe five wins and five losses, but until he gets comfortable in the ring until he gets to learn it, then, yes, we will progress slowly.

It’s just a process and getting him used to the ring. We could put him in against guys that are much better than him, and he would beat them, but they would be wars. We want to have our wars later – not right now – we want to get him experience. That’s what this is all about – experience.

Every fight he has been in he has learned something, without a doubt. He’s learned how to be aggressive. This time he is probably going to move and box more, depending on circumstances. We are handpicking things that we want to work on and each time we work on something different. For one fight, we worked on our right hand, one fight we worked on our left. This fight we will be working more on boxing and using his jab more. This fight our goal is to use our jab a whole lot more. From there we will pick up the pace – he has had three fights so far, then at the time we feel comfortable it will start moving real quick, but we are not going to move real quick until we are comfortable.

Evan is doing good but it’s kind of hard to tell when you first start off because you are trying to figure out what type of fighters he is fighting compared to who that champion is in that weight division, to know where he has to get. Right now I think just getting him comfortable when he’s in there and showing that it’s not that much different than being in the gym.

Evan is kind of skillful and I think you get tested when you get good sparring partners – somebody who has done something, somebody that used to be a champion.

I remember when I sparred against the guy from Philadelphia (Bert Cooper) that made George Foreman quit boxing the first time. They put him in there and my trainer Georgie Benton told me I wouldn’t even get a lick on him and the first round I took it slow trying to figure him out. The second round I hit him with a combination ‘boom, boom, boom, boom, boom, boom.’ It was more than the three punches he normally got – it was six, seven or eight because I know he could block the first two. He thought I would pull back after the first two but I hit him with the next six (laughing) and they had to pull me off him.

(Back to Evan) So I am looking forward to him stepping it up to another level. He was a good amateur fighter and as he’s coming along. He’ll have to find someone that will keep him on the outside. Right now he is keeping the opponents on the outside. People that are aggressive can’t stand the other guy being aggressive, and with me, I always knew that – like with Mike Tyson – he couldn’t fight going backward to save his life and I knew that so I pushed him backward and it proved the fact that people don’t want people to do things to you that you do to them. (Then he bit your ear) Yes (laughing), he sure did.

(Do you get excited about his fights?) I kind of push my emotions down because I know that’s the way I was supposed to be when I fought, but it’s difficult because I’m his father. I make myself emotionless, and not look at it being big and all this. Being able to look at him and he won’t see any stress on my face regardless.

I realize that I come from a very emotional family and it always bothered me and it made me think “You don’t believe in me.” I remember with the first fight against Dwight Muhammad Qawi, they all said ‘you are throwing him in there too quick,’ but I always believed I could beat anybody they put in the ring.

I’ve seen my opponent fight and I know he is going to come to fight. I am just going to go out there and hit and don’t get hit and let my punches do the talking. Regarding my dad and my last name . . . I don’t feel any pressure. When I get in the ring I fight for myself. I am in the ring for me. I don’t care if no one showed up to watch. I don’t care if I had my mom’s last name, I would still go in there to give it my all. I feel like I have the talent that got me this far and it is just a matter of staying focused, staying in love with the sport.

My dad and I were the same size all through our lives and now we are both 6’2” but I am still eating my Wheaties to try to get that extra inch.


« Briedis’ trainer: Team Dorticos give us extra fuel and motivation