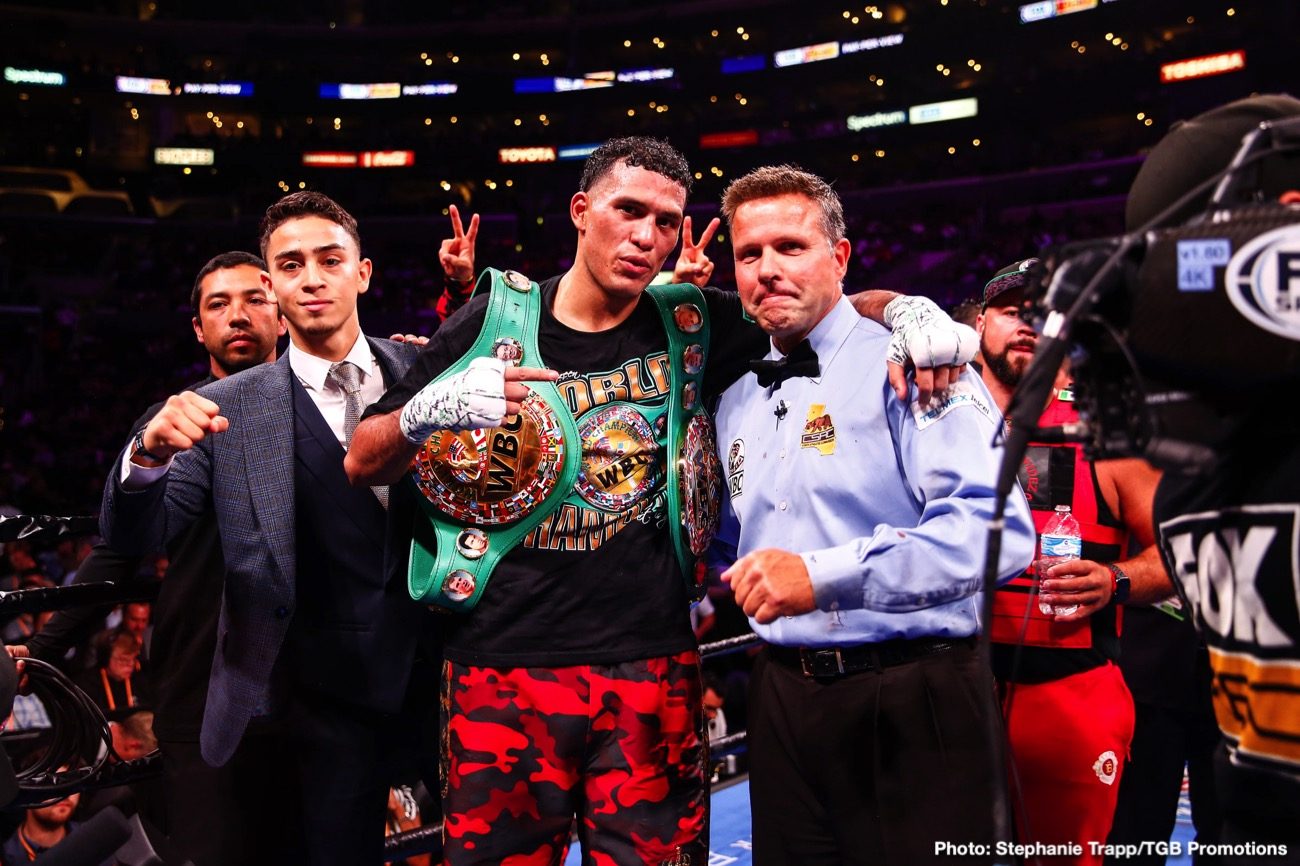 One of the sport’s brightest young stars, Benavidez kicks off his second reign as WBC Super Middleweight Champion by returning to fight in his native Phoenix for the first time since 2015, when he knocked out Ricardo Campillo in just his 10th pro fight.

“Benavidez can expect a strong challenge from the exciting Roamer Alexis Angulo, which should create an action-packed main event live on SHOWTIME. Two more fights with title implications add to the intrigue, with fast-rising Michel Rivera barreling toward a championship and two-division champion Rances Barthelemy hoping to pry the title away from Alberto Puello.”

“From the start of his career, long before he became champion, people have been asking me about Davíd fighting at home,” said Sampson Lewkowicz of Sampson Boxing. “Now is the perfect time and I’m very happy to help bring this show to Davíd’s hometown. I have no doubt it will not only be a great event; it will also be packed with thousands of fans of ‘El Bandera Roja’ Benavidez.”

In the co-main event, we have yet another boxing prodigy in undefeated 21-year-old rising star Michel Rivera, who is facing his most challenging opponent to date in Marcos Villasana. To round out the card, we will yet another undefeated young rising star in 25-year-old Alberto Puello, who takes on battle-tested veteran Rances Barthelemy.”

Tickets for the live event, which is promoted by TGB Promotions and Sampson Boxing, are on sale now and can be purchased at www.ticketmaster.com and at the Arizona Federal Theatre box office.

The 23-year-old Benavidez (22-0, 19 KOs) defends his belt after defeating two-time super-middleweight champion Anthony Dirrell in September, stopping him in nine rounds. Benavidez is trained by his father José Sr., alongside his brother and former title challenger, José Jr. In 2017, he became the youngest super middleweight champion in boxing history by defeating Ronald Gavril on SHOWTIME at just 20 years old.

Benavidez went from a 15-year-old prodigy sparring with Gennady Golovkin and Peter Quillin, to world title contender with a 10-fight knockout streak from 2015 through 2017, including a highlight-reel knockout of Rogelio Medina with a seven-punch combination that earned him his first championship.

“I’m very excited to be fighting Angulo on SHOWTIME and in front of my hometown crowd,” said Benavidez. “I haven’t fought in Phoenix in five years. It’s exciting to be back.

“I expect Angulo to come in ready. I know he just pulled an upset in his last fight and he’s not taking any shortcuts, but neither am I. Angulo has never been stopped, so I want to be the first person to stop him. I feel like I’m more motivated with a hungry fighter like him in front of me, and you will see it in my performance.”

Born in El Bordo, Colombia and now fighting out of Miami, Fla., Angulo (26-1, 22 KOs) enters his second world title opportunity on a three-fight winning streak, including two triumphs over previously unbeaten fighters. Angulo stopped Reinaldo Gonzalez in 2018 in his first fight since losing a decision to then-super middleweight champion Gilberto Ramirez earlier that year. He scored a decision victory this January over Anthony Sims Jr. to put himself in position to again challenge the best in the division.

“I’m very motivated by this great opportunity to fight for the world title again,” said Angulo. “Benavidez is a talented world champion who is clearly one of the best super middleweights in the world. This is going to be a great fight for the fans because of the style I bring to the ring. My Mexican style of fighting will be too much for Benavidez and I will have my hand raised on April 18.”

Born in Santo Domingo, Dominican Republic and now living in Miami, the 21-year-old Rivera (18-0, 12 KOs) made his U.S. debut on ShoBox in June of 2019 by scoring an impressive unanimous decision victory against then-unbeaten Rene Tellez Giron, who would go on to upset Karlos Balderas in his next fight. The explosive rising star then followed up by stopping Jose Luis Gallegos in September and scoring a vicious 10th-round TKO against Fidel Maldonado Jr. in February of 2020.

Villasana (25-6, 14 KOs) is the son of former featherweight champion Marcos Villasana, and fights out of Acapulco, Mexico. The 28-year-old will make his U.S. debut on April 18 riding a 10-fight winning streak that includes five knockouts. He most recently picked up two victories in 2019, defeating then-unbeaten Roman Villa in April before knocking out Javier Franco in August.

Representing his home of San Juan de la Maguana, Dominican Republic, Puello (17-0, 9 KOs) will make his U.S. debut on April 18 when he faces Barthelemy. The 25-year-old has fought professionally since 2015, defeating a slew of regional contenders and prospects. His most recent fight saw him defeat 2012 Olympian and then-unbeaten Jonathan Alonso by 12-round decision to capture his interim 140-pound title.

A decorated Cuban amateur who hails from a boxing family, Barthelemy (27-1-1, 14 KOs) is moving back to super lightweight after fighting former champion Robert Easter Jr. to a draw in their April 2019 lightweight title fight. The 33-year-old now trains in Las Vegas and has won titles in two weight classes, defeating Argenis Mendez for a 130-pound crown in 2014 and Denis Shafikov for a 135-pound belt in 2015. Barthelemy will look to work his way toward a second world title shot at 140 pounds, which could make him the first three-division champion from Cuba.