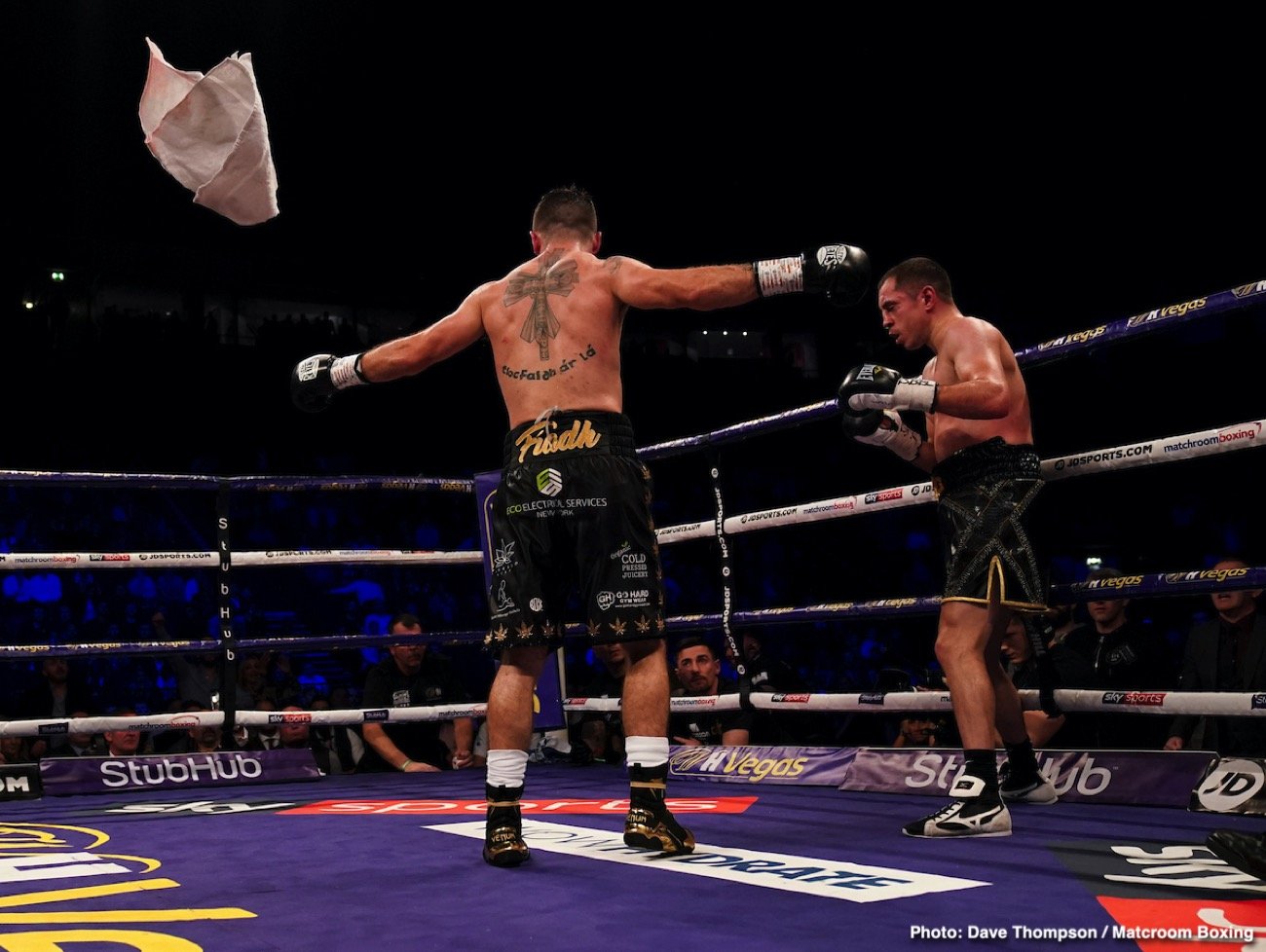 Dublin’s Jono Carroll produced a career-best performance to stop former World Champion Scott Quigg at Manchester Arena, live on Sky Sports in the UK and DAZN in the US.

‘King Kong’ dominated from the opening bell before the former WBA Super-Bantamweight Champion’s corner threw in the towel in the 11th round after a sustained attack from the Irishman.

Quigg was hopelessly overmatched against Carroll

After a fiery build-up to their crunch Super-Featherweight showdown, the rivals finally got to settle their differences in the top-of-the-bill clash which ended with Bury’s Quigg pondering his future in the ring.

“He was the better man. I was chasing him,” said an emotional Quigg afterward. “Fitness-wise was no problem but my timing wasn’t there.

Is this the end for Quigg?

“I’m a realist and I won’t kid anyone. This was a must-win fight. At my best, I would have won tonight. On this performance, I don’t know what’s left.

“I couldn’t have achieved anymore, and I cut no corners. I beat World Champions, sold-out arenas. If this is it, thank you.”

“Scott was one of my idols growing up but this is my time, tonight I showed my quality,” said Carroll.

Fighting at the Manchester Arena for the second time in his professional career, Parker was ecstatic to once again put in a knockout performance for the Manchester fight fans.

“It was a great fight and I hope the fans all enjoyed it,” said Parker. “It was always going to be a good fight when it’s number 1 versus number 2!

“He was a very tough guy. He took some great shots and kept coming. I was happy to get the stoppage at the end and I knew it would come,” Parker continued. “I’m now number 1 with the WBO so I should be fighting for world titles very soon. I’m ready for them all!”

“Zach was brilliant, I said before the fight that he was going to steal the show and he has done exactly that,” said Sauerland. “He’s produced the fight of the night and sealed it with a knockout – Zach Parker is going all the way to the top!”

Jack Cullen stopped Tomas Andres Reynoso in two rounds to return to winning ways and set up an exciting clash with Ireland’s Jason Quigley on the Whyte-Povetkin undercard on May 2.

Robbie Davies Jr secured a shutout win over Damian Leonardo Yapur in his first fight since teaming up with new trainer Dominic Ingle. Davies Jr dominated the Argentine over eight rounds to claim an 80-72 decision on his return to the ring after losing to super-lightweight rival Lewis Ritson in a domestic thriller in October.

Dalton Smith claimed his third straight stoppage with a TKO victory over Benson Nyilawila. The former amateur star from Sheffield dropped southpaw Nyilawila in every round before the referee’s intervention in the fourth to extend his record in the pro ranks to 5-0.