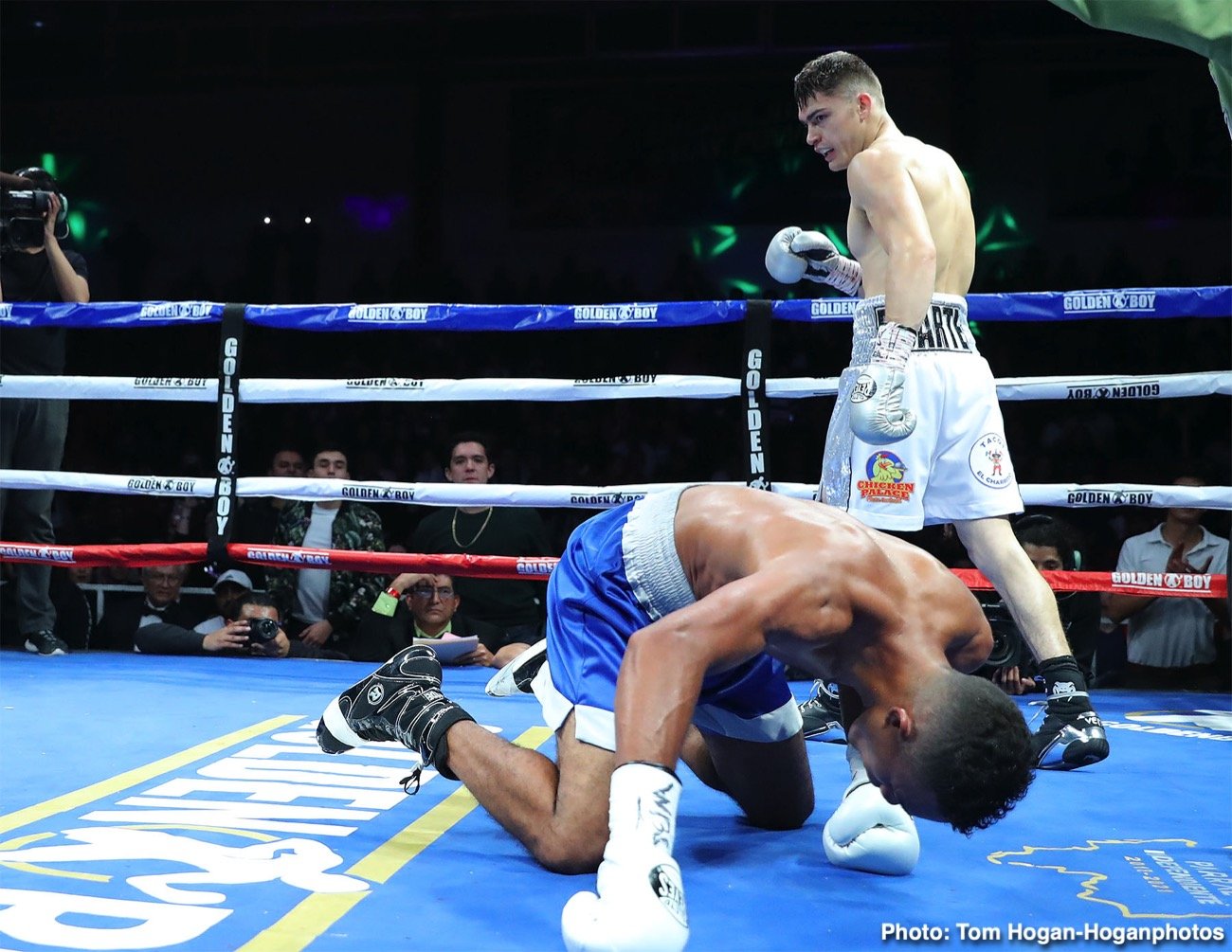 Lightweight contender Oscar Duarte (19-1-1, 14 KOs) delivered a spectacular hometown performance tonight by scoring a brutal knockout win over Andres Garcia (13-3-1, 8 KOs) at 1:02 of the fifth round to capture the vacant NABF Lightweight Title in the scheduled 10-round main event of Golden Boy Fight Night on Facebook Watch. The event, which featured three battles between Mexico and Colombia, took place at The Gimnasio Municipal in Parral, Chihuahua, Mexico and was streamed live globally on Facebook Watch via the Golden Boy Fight Night Page.

“I dedicate this fight to all of you in attendance today,” said Oscar Duarte. “Without all of my people in Parral, Chihuahua, I would be nothing. I’m now looking for bigger things. It’s big responsibility to be ranked highly in this division. But my goal is to be a world champion, and I’m going to work very hard for that.”

In the co-main event, Luis “El Matador” Hernandez (21-0, 19 KOs) of Chihuahua, Mexico scored a third-round knockout win against Placido Ramirez (17-2, 10 KOs) of Soplaviento, Colombia to capture the vacant WBC Continental Americas Super Lightweight Championship. The fight was stopped at 1:37 of the round just mentioned.

“I came here to win by knockout and to deliver a great show,” said Luis Hernandez. “Placido hits very hard. I didn’t know he could hit that hard, but thank God we managed to get the win.”

William “Camaron” Zepeda (21-0, 19 KOs) of San Mateo Atenco, Mexico defeated Bryam Rico (12-3, 10 KOs) of Bogata, Colombia via technical knockout in a scheduled 10-round lightweight fight. Zepeda ended matters at 2:47 of the sixth round.

“It was a good fight against at tough, long-armed opponent,” said William Zepeda. “The key was to pressure him and to not allow him to get comfortable. There were some difficulties, but we came to win, and we did it by fighting round by round.”

Duarte vs. Garcia was a 10-round fight for the vacant NABF Lightweight Title presented by Golden Boy in association with the Municipality of Hidalgo del Parral and 2M Promotions. The event took place on Saturday, March 7 at the Gimnasio Municipal in Parral, Chihuahua, Mexico. The fights were streamed live globally on Facebook Watch via the Golden Boy Fight Night Page.

With a nice crowd cheering him on at the Grigehallen in his home-town Bergen, 27-year-old Lihaug scored a unanimous decision over tough, game and rugged Germany-based Armenian co-challenger Vartan Avetisyan.

Lihaug had control of the fight in the first half, but Avetisyan never gave up and had his moments, especially in the second half of the bout. Many rounds were close, but the home-man did just a little bit more of the cleaner work to catch the eyes of the judges.

Judge Torben Seemann Hansen scored the fight 116-112, while judges Sigmund Aagaard and Andre Hook both had it 117-111. Referee in charge of the action was Mikael Hook.