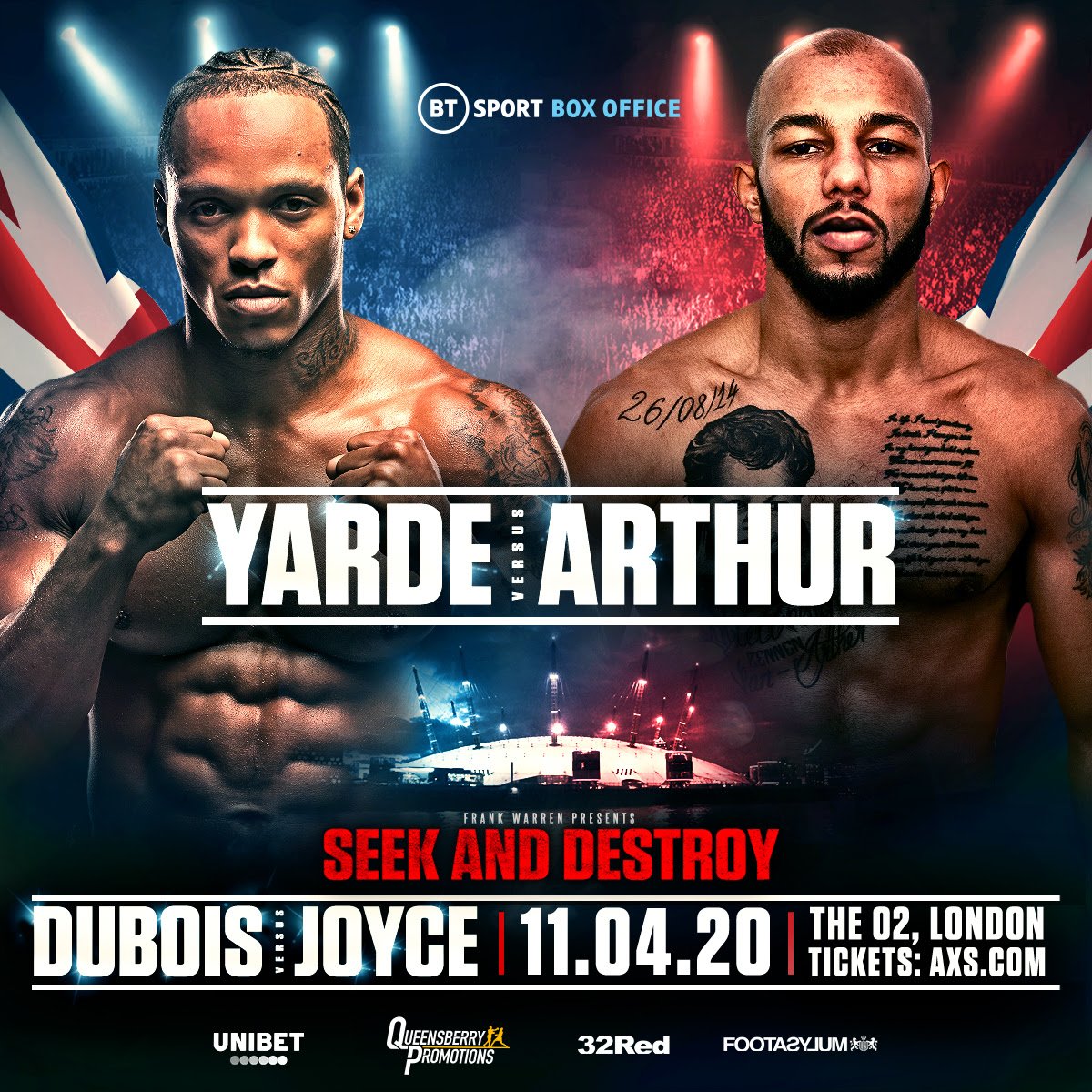 THE EAGERLY ANTICIPATED ‘Seek and Destroy’ showdown between Daniel Dubois and Joe Joyce at the o2 Arena on April 11 now has a blockbuster chief support in place with Anthony Yarde set to take on the unbeaten Lyndon Arthur.

In what is another huge domestic duel, Yarde – who lost out in a world title challenge to Sergey Kovalev on away soil in August of last year – goes in with Manchester’s former Team GB product and Commonwealth champion Arthur in what is certain to be a pulsating collision of big-punching light heavyweights.

Prior to his venture to Chelyabinsk – Kovalev’s home town – Yarde had stopped all but one of his previous opponents and worked his way to the No.1 position with the WBO, winning the Southern Area, WBO European and WBO Intercontinental titles along the way.

Before this, the explosive 28-year-old known as ‘The Beast’ had not been taken beyond seven rounds and he currently holds a 90 percent KO-ratio. Yarde’s ring record stands at 19-1 (18 KOs).

Decorated amateur Arthur, also 28, has registered 12 KOs from his 16 professional fights and won his Commonwealth crown last time out against Emmanuel Anim in December.

Trained by Pat Barrett at the Collyhurst and Moston Gym, ‘King Arthur’ has long considered himself the dark horse of the currently hot division and was patiently awaiting a breakthrough opportunity against one of the marquee domestic light heavyweights.

His wait is nearly over and we can expect a fascinating clash between a vastly experienced former amateur star and one who exploded onto the scene and thrived despite a limited amateur background.

Further title action comes in the form of a British welterweight championship rematch between Chris Jenkins (22-3-3, 8 KOs) from Garnant in Wales and ‘The Pexican’, Peckham’s Johnny Garton (21-2-1, 10 KOs).

The pair met in March 2019 when Garton was champion – having won the belt in a thriller against Gary Corcoran – at the Royal Albert Hall. Jenkins prevailed via the scorecards after an enthralling encounter and now he makes his third defense, having clocked up a victory over Paddy Gallagher and a technical draw last time out with Liam Taylor, where the fight was stopped due to a severe cut.

‘Sharpshooter’ Sharp clinched his champion status in October 2018 with the defeat of the then-unbeaten Lyon Woodstock in Leicester. He has since made three successful defenses of his title and has broken into the top-five of the WBO world rankings.