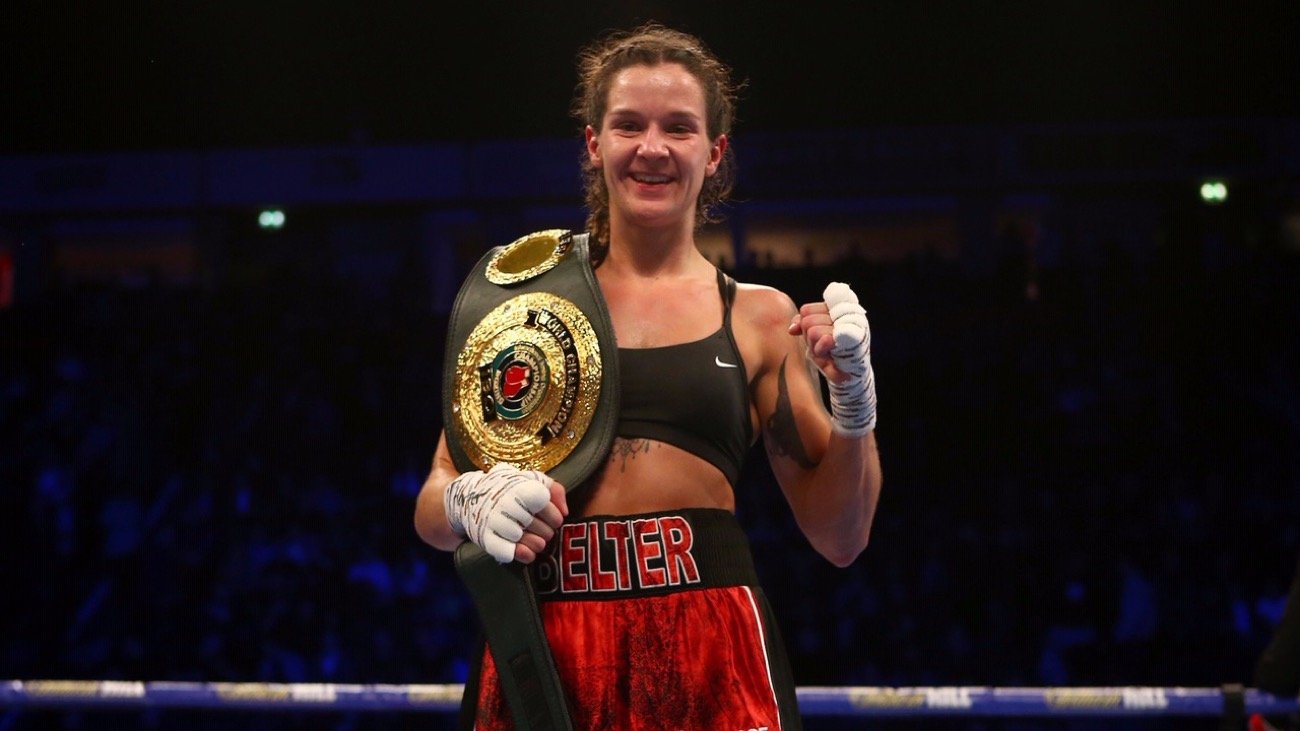 WBC Champion sees flaws in “inexperienced” rival – Eva Walhstrom says she has seen flaws in Terri Harper that she plans to capitalise on when the pair clash tomorrow night, live on Sky Sports in the UK and DAZN in the US, in a unification bout for the WBC and IBO World Super-Featherweight Titles.

Wahlstrom (23-1-2, 3 KOs), who is Finland’s most successful boxer, will be making the sixth defence of the WBC Title she has held since 2015. She claimed the coveted green and gold strap with a unanimous points victory over Natalia Valle Aguirre in Helsinki.

The vastly experienced Finn who has been boxing since her opponent was born in 1996 believes the majority of media and fans having Harper as a hometown favourite will only help drive her on to victory.

“Betting agencies have set odds for Harper as a clear favourite and that’s definitely something which has given me extra motivation in a build-up,” said Wahlstrom. “Being seen as an underdog is that kind of stimuli which one needs in order to really ‘get up’ for a challenge after already engaging in several title defences.”

When asked how she rated ‘Belter’ as an opponent, the 39-year-old highlighted Harper’s lack of experience as a pivotal factor in determining the outcome of the fight as well as having a “schoolbook” style that will allow her to stay one step ahead.

“I see Harper as young and hungry challenger who is smart and technical but also somewhat inexperienced. She is also so schoolbook-correct in her style that she should be rather easy to read in the ring. I believe that I have an edge in ability to adapt and change tactics mid-fight.”

Terri Harper is targeting a life-changing win over Eva Wahlstrom at the FlyDSA Arena on Saturday February 8 when they clash in a huge unification battle for the IBO and WBC Super-Featherweight World Titles, live on Sky Sports in the UK and DAZN in the US.

Harper (9-0, 5 KOs) got off to a flying start under the Matchroom Boxing banner with a polished performance to outpoint tough Brazilian Viviane Obenauf in the first defence of her IBO crown on her 23rd birthday in November.

‘Belter’ admits the pressure she felt to perform on her big Matchroom debut may have caused her to play it safe at Manchester Arena but the undefeated Denaby star, South Yorkshire’s first female professional boxer, has promised to take it to her opponent next month.

“Watching the Obenauf fight back I feel I held back a bit,” said Harper. “I had a lot of pressure on me to perform on my Matchroom debut and maybe played it a bit too safe. In this fight I feel I will be more adventurous, I know what Eva is going to bring and I will go out there and show my ability. I’m ready to show everyone what I can do.

“One of the main changes is that we have been sparring straight away, getting lots of rounds in with different girls and training twice a day alongside Anthony Tomlinson who is also on the bill. I have my feet through the door now and I am ready for February 8, a date I will hopefully come home as WBC World Champion.”

Wahlstrom (23-1-2, 3 KOs), a pro since 2010 and who has only lost to Irish sensation Katie Taylor, promises to be a career-defining fight for Harper. The Finnish 39-year-old has held the WBC title since 2015, making fives defences of the green and gold belt during her reign.

Guided by Stefy Bull from his gym in Doncaster, Harper has passed every test of her career with flying colours since turning professional in 2017 following a successful stint in the amateurs and the 23-year-old believes she has what it takes to overcome Wahlstrom in a clash of youth versus experience.

“Eva is a solid opponent who has shared the ring with some great female boxers over a long career. She has more experience than me but she is nearly 40 and I feel it is my time now, to take the baton and get the win. I feel like I have long range and won’t get dragged into a brawl. We have seen that she is open to that back hand so that is what we have been working with in the gym, I want to get back on my knockout streak!

“It’s a 50:50 fight but I feel like I have got youth on my side. I am so hungry to win this and have prepared for the best version of Eva Wahlstrom possible. I have put 110% into this camp because I know that if I prepare correctly that I can change my life on February 8. I have dreams of boxing in America and I see that as the next goal for me after winning this WBC title.

“All I see in this fight is me being dominant with my jab and then stopping her with my back hand, I just feel like it’s something she will not be able to deal with. I feel my fitness will come through and the fight will be over in the mid to late rounds.”

Harper vs. Wahlstrom is part of a huge night of action in Sheffield.

Kell Brook (38-2, 26 KOs) will be aiming to shake off the ring rust and fire his name back into the mix for a Word Title shot in 2020 when he meets the USA’s Mark DeLuca (24-1, 13 KOs), Kid Galahad (26-1, 15 KOs) takes on Claudio Marrero (24-3, 17 KOs) in a Final Eliminator for the IBF Featherweight crown, Anthony Tomlinson (11-0, 6 KOs) takes on Stewart Burt (13-1-1, 1 KO) in a Eliminator for the British and Commonwealth Welterweight titles, Dave Allen (17-5-2, 14 KOs) makes his long-awaited return after eight months out of the ring, Brentwood Super-Featherweight Martin Joseph Ward (23-1-2, 11 KOs) returns, Sheffield Super-Featherweight prospect Donte Dixon (2-0, 1 KO) returns, Super-Middleweight John Docherty (7-0, 5 KO) continues his march towards a first title, Leeds Featherweight Hopey Price (2-0, 1 KO) looks to go 3-0 and Sheffield Light-Heavyweight Callum Beardow (1-0) fights for the second time as a pro.