Mikey Garcia could face Manny Pacquiao next in Saudi in July 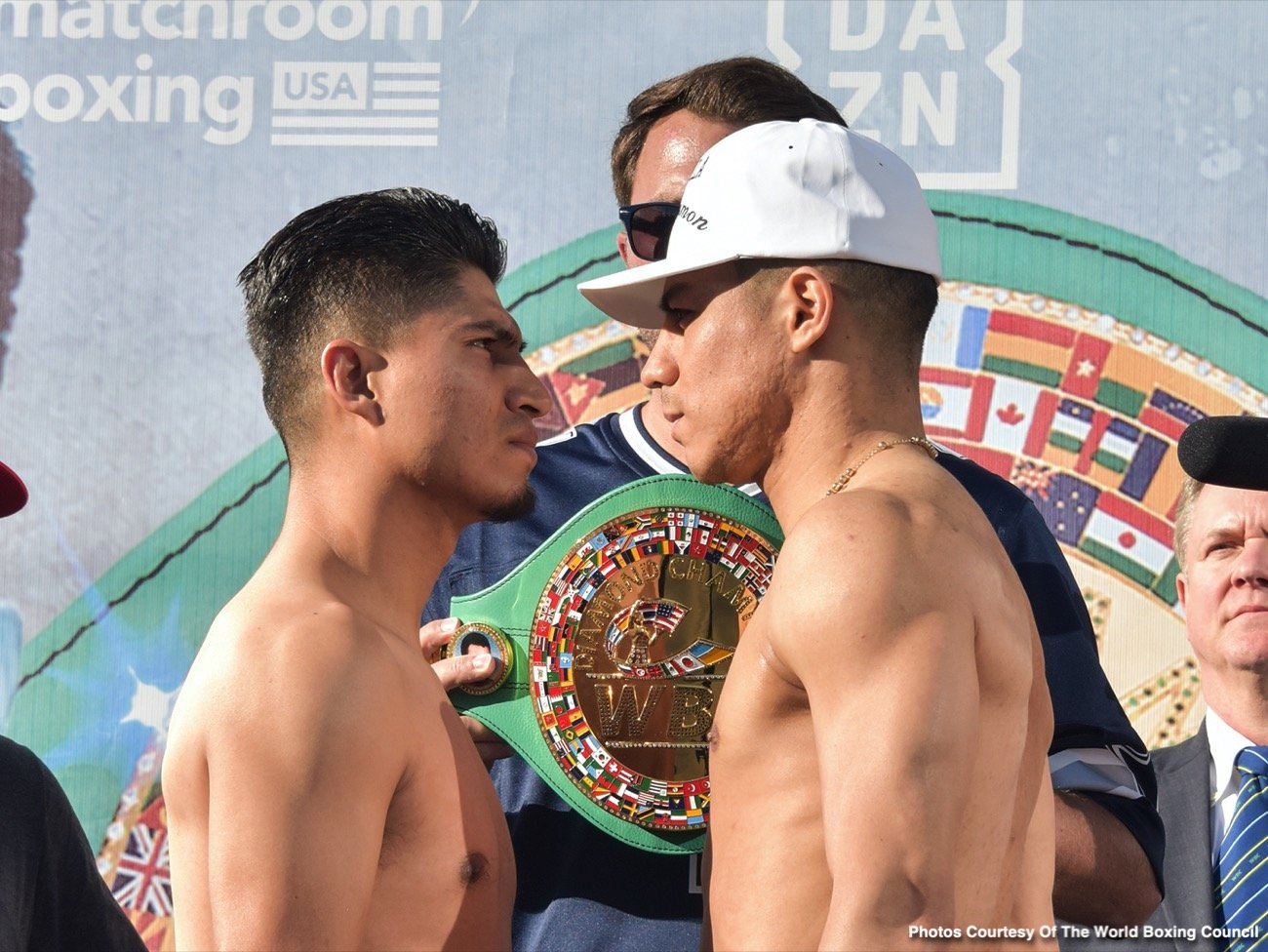 By Allan Fox: Mikey Garcia (39-1, 30 KOs) is in the position where he controls his own destiny on Saturday when he faces Jessie Vargas at 147. Garcia-Vargas are fighting this Saturday in the headliner bout on DAZN at The Ford Center at The Star in Frisco, Texas. It’s a great spot to be in for both fighters, but also one in which their performances will be potentially criticized if they don’t shine.

If Mikey wins, he’s got a chance to face Manny Pacquiao in July in Saudi, but here’s the kicker. For Mikey, 32, to potentially get the fight against WBA welterweight champion Pacquiao (62-7-2, 39 KOs), he must not only beat Vargas (29-2-2, 11 KOs), but he also needs to do it in an impressive fashion.

A loss for Garcia against Vargas would foil his chances for a huge mega-fight against the 41-year-old Filipino star, and likely result in him moving back down to 140.

Should Mikey lose to Vargas, he would still have the opportunity to fight Devin Haney or the winner of the April 17th fight between former light-welterweight champions Regis Prograis and Maurice Hooker. Mikey will still have options available to him if he’s beaten by Vargas.

Hearn wants Mikey vs. Pacquiao in July in Saudi

“PBC doesn’t have Mikey Garcia. We do and we have an option on his next fight, which we will be exercising, but he’s got to beat Jessie Vargas,” said Hearn to Fighthype. “Everyone seems to be looking passed, Jessie Vargas. I think it’s going to be a really tough fight. We’ll see.

“We’ll be doing an event in July in Saudi Arabia. We’d like that to be against Manny Pacquiao, and if Mikey Garcia is triumphant on Saturday, I’d like that to be Manny Pacquiao against Mikey Garcia,” Hearn said. “He’s not with Al Haymon, and he doesn’t have any advisory deal with anyone. He’s his own boss, which is a good thing and a bad thing for us.

“He just likes to do fight by fight deals, but we’ve got the rights to stage his next fight, which we’ll be looking to do. Mikey is going to do what’s right for Mikey. I think he’s going to enjoy himself with us, but anything could happen. He could lose on Saturday or look really bad and win, and then maybe not have the value that he could have,” Hearn said of Garcia.

“He could look sensational, and his value could go through the roof. But Mikey always backs himself. He doesn’t want to do long term deals because he believes he’s going to look so good that you’re going to pay him a load more for the next fight. I like that. I like people that back themselves. We’ll see what happens on Saturday,” said Hearn on the Garcia vs. Vargas fight.

There’s a very good chance that Mikey will get the Pacquiao fight in July if he beats Vargas on Saturday, but he’s got to do that first. Vargas’ size advantage over Mikey is huge.

Mikey SHOULDN’T be fighting at welterweight

“He shouldn’t be at 147, but people tell him he shouldn’t be at 147, and he’s really stubborn,” said Hearn about Mikey. “He’s like, ‘No, I’ll show you I can fight at 147.’ Jessie Vargas is going to have a big size advantage in the ring on Saturday, but if he can beat Jessie Vargas, you’ve got to think that he should be legitimized for a world title shot at 147, and to try and become a five-weight world champion. But I really think his best weight is 140.

“You’ve got the winner of this fight, Prograis-Hooker, and you’ve got Devin Haney, who wants to fight Mikey Garcia as well. Mikey can fight anyone. He just wants to be in good fights,” said Hearn.

Mikey’s last fight at 147 against Errol Spence Jr. showed that he doesn’t belong in this weight class, but he’s made the decision to stay. Hearn thinks Mikey is being stubborn by staying in the weight class.

It’s more likely that Mikey has chosen to stay at 147 because of the paydays. He can make more money in losing to welterweights than he can at 135 or 140. Hearn thinks Mikey should be fighting at 140, but he’ll have just many problems in that division as he will at 147.

In Mikey’s only fight against a TRUE light-welterweight in Sergey Lipinets in 2018, he took a pounding from him. Mikey won the fight by a 12 round unanimous decision, but he was punished badly. At the end of the fight, Mikey’s face was bloody and swollen. Lipinets is a good fighter, but he’s not as talented as the top 140-pounders Regis Prograis, Jose Ramirez or Josh Taylor.

If Mikey fights any of those guys at light-welterweight, he’ll have problems. Where Mikey belongs is at lightweight [135].

Jessie Vargas raises his profile if he beats Mikey

“He wanted to move to 154, but this fight came up at 147, and I promised I’d deliver Jessie Vargas a big fight,” said Hearn when asked what happens with Vargas if he beats Mikey on Saturday. “It’s a massive opportunity. It’s big money, a big profile, but he would be happy to go up to 154. A victory on Saturday would give him that profile.

‘I have no problems with our guys getting an opportunity to fight on FOX if we can’t get it on DAZN,” Hearn said about Jessie. “You see Demetrius Andrade at the moment. If [Jermall] Charlo wants to fight him, we’ll do it on FOX. It’s fine with us because if we can’t deliver the big fights on DAZN, we’ve got to help them get the big fights somewhere.

‘So I’m happy for Jessie to look at opportunities at 147 or 154. He was one of the first guys that moved from PBC to join with us at DAZN, so we’ve got a little soft spot for him. I think he’s got a great chance on Saturday. He’s really pumped for this fight,” said Hearn.

If Vargas wins on Saturday, his options are fewer obviously. Vargas is not going to get the Pacquiao fight, because he already lost to him in 2016. Hearn understands that, so he’s not even pretending that Vargas has a chance to fight Pacquiao in July. If Jessie beats Mikey on Saturday night, Hearn will likely attempt to match him against PBC fighter Jermell Charlo at 154. That’s not likely to happen.

The best option potentially for Vargas would be for him to get in line, and wait for IBF/WBA junior middleweight champion Jeison Rosario to give him a title shot.