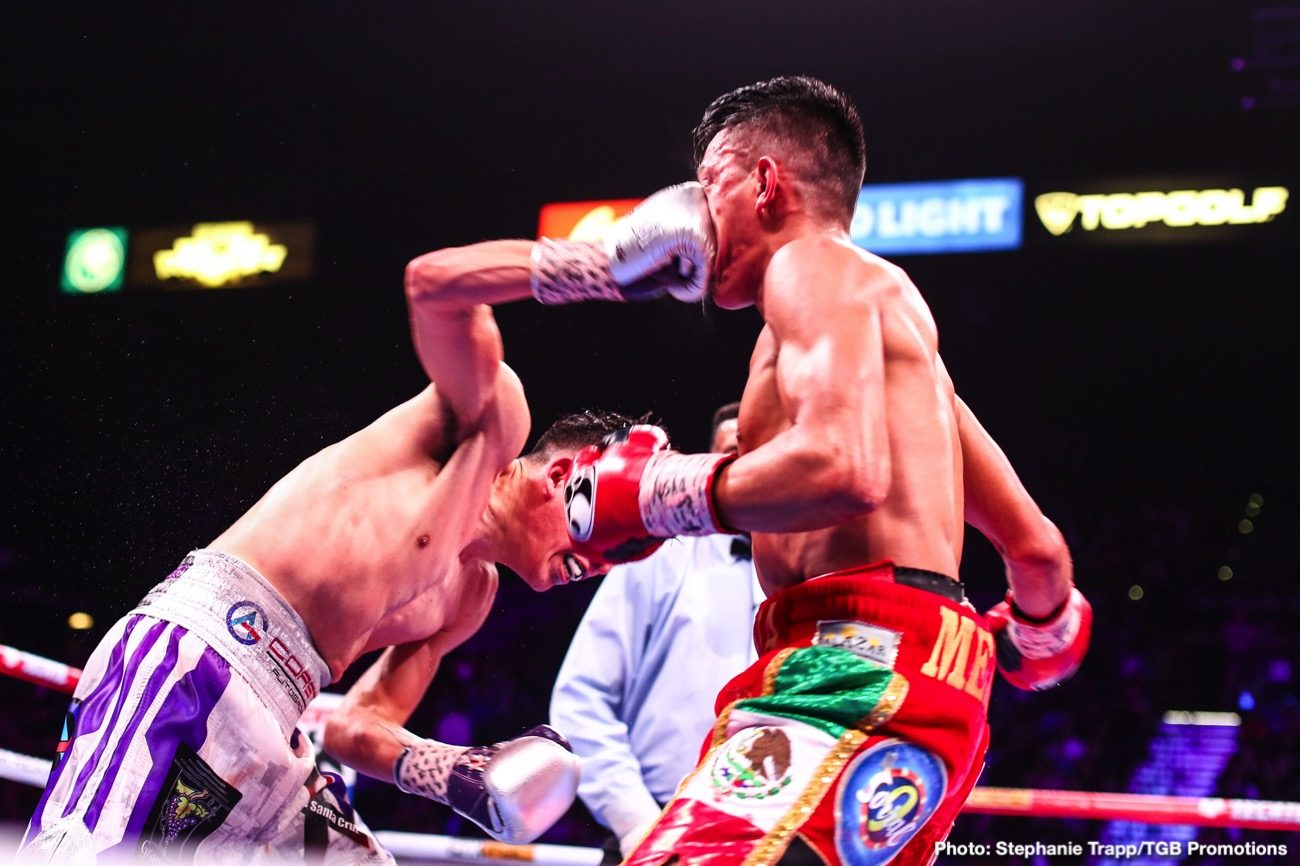 By Jeff Aronow: Leo Santa Cruz says he’s asked his management to setup a fight with WBA ‘regular’ lightweight champion Gervonta ‘Tank Davis for May on Cinco de Mayo holiday weekend, and he’s waiting to see if they’ll be able to do that. Santa Cruz (37-1-1, 19 KOs) would be moving up one division from 130 to 135 to take the fight with Tank Davis.

It’ll be a hard fight for the 31-year-old Santa Cruz in facing the unbeaten Davis (23-0, 22 KOs), seeing that he didn’t look especially great in his last fight in beating Miguel Flores (24-3, 12 KOs) by a 12 round unanimous decision on November 23.

Santa Cruz captured the vacant WBA Super World super featherweight title with his victory over the 27-year-old Flores. However, two of the judges’ scores were wider than the fight appeared to be. They had Santa Cruz winning 117-111, 117-111.

The third judge appeared to have the more accurate score in calling it 115-113. That was Santa Cruz’s first fight at 130 after having fought at 126 for four years. The move up to super featherweight showed that Santa Cruz’s power didn’t carry up with him.

Santa Cruz hopes to fight in May

“They haven’t told me when it’ll be, but maybe in May,” said Santa Cruz to Fighthype about his next fight. “Hopefully it’ll be against him [Davis]. I asked for that fight, and I said, “I want to fight Tank,’ and they said they’re going to try and make it.

“So hopefully it does happen. If it happens, it’ll probably happen in May on Cinco de Mayo. In Vegas or wherever that works best,” said Santa Cruz.

Gervonta Davis is just too big, too strong and too young for Santa Cruz right now. Santa Cruz has never fought at lightweight, and Davis  is now more of a 140-pounder. Tank is barely making 135 after just one fight, and it’s obvious that he’s not long for the division.

If Santa Cruz faces Davis, he needs to be prepared to be outweighed by a considerable margin when he enters the ring. The size and the power of Gervonta would be a nightmare for the easy to hit Santa Cruz.

Leo will probably be fighting in May, but not against Gervonta Davis or Gary Russell Jr. Those are fights that might not ever happen, unless it’s a cash out type of thing for Santa Cruz. It’s predictable that Santa Cruz’s management will line him up with someone that he’s capable of beating like Michael Conlan, Oscar Escandon or Anselmo Moreno.

Santa Cruz: I can beat Gary Russell Jr. by throwing a lot

It’s likely that Santa Cruz’s management realize that Russell Jr. is a bad style match-up for him, and they’ll make this fight ever. It’s not like Russell Jr. has been quiet about wanting to fight Santa Cruz.

He’s made it known for the last three years that he wants to fight Santa Cruz, but it’s not happened. It’s easy to see why. If Santa Cruz was capable of beating Russell, that fight would have likely happened in 2017.

Gervonta Davis will be dangerous for Santa Cruz

“Tank, he has the power. He’s strong, but he’s not as fast as Gary Russell. So I want to pressure him, and look out for those big punches,” said Santa Cruz on Gervonta.

“If he catches me, I know he can hurt me, because he’s big and has heavy hands, but I’m going to be smart,” said Santa Cruz a fight between him and Tank Davis. “I’m going to train really hard in the gym, so I don’t get hit with those punches. Hopefully if we go to a decision, it’ll be a decision for me,” said Santa Cruz.

We’ll see if Santa Cruz’s management can put together a fight with Gervonta or Russell Jr. for May. Boxing fans have little confidence that Santa Cruz will fight either of those guys in May, as he’s been matched selectively since his narrow win over Carl Frampton in 2017.

Santa Cruz avenged his loss to Frampton by edging him by a 12 round majority decision three years ago, but Leo’s done little since then in facing beatable guys.

Santa Cruz has faced these fighters in last three years:

Santa Cruz hasn’t taken on an elite level fighter since his rematch with Frampton, and seems to be fighting carefully selected opposition at this stage of his career.

Although Mares was a good fighter in his prime, he was well past it when he fought Santa Cruz for the second time in 2018. Even when they fought the first time in 2015, Mares was arguably over-the-hill already.