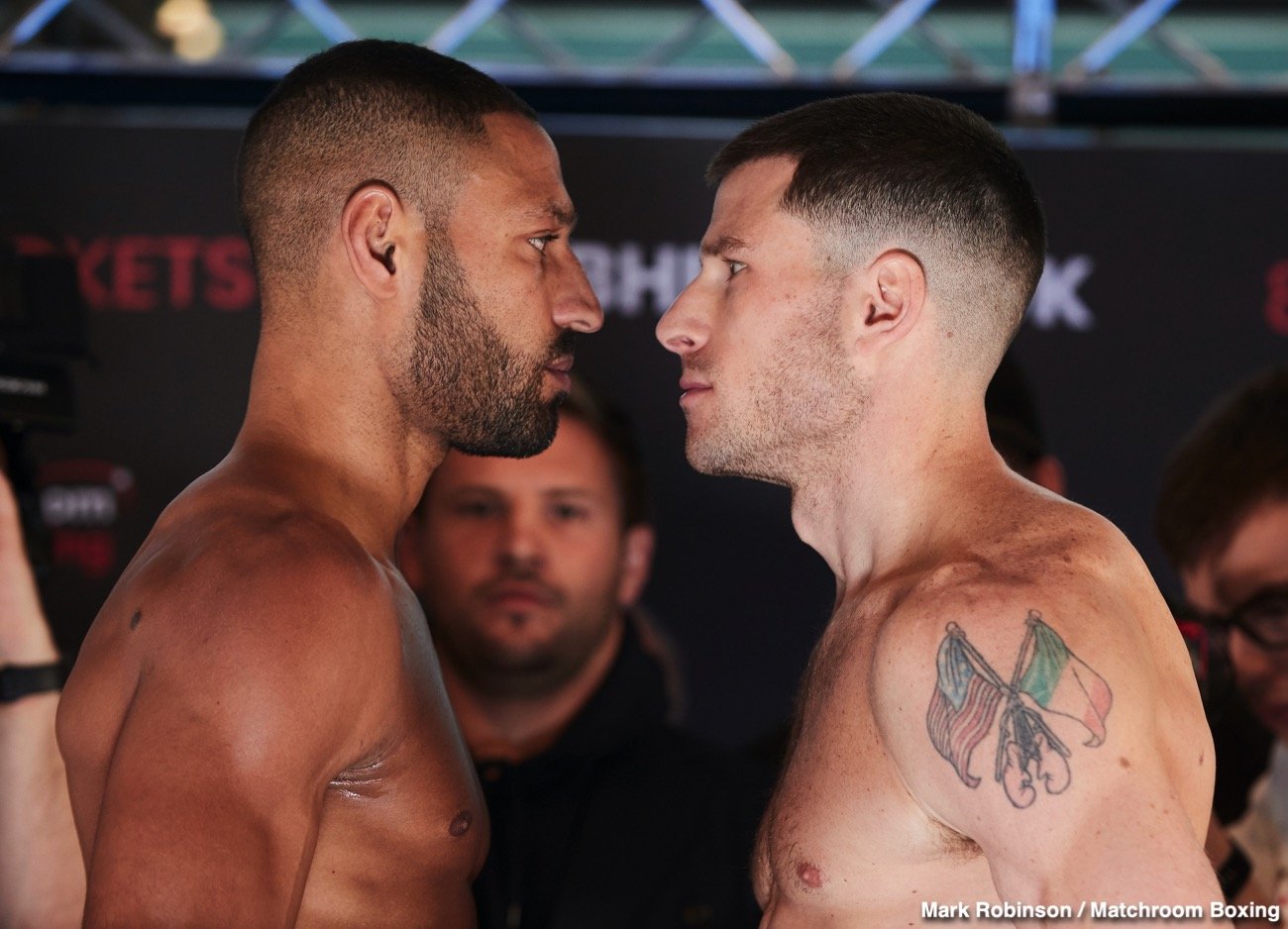 By Jeff Aronow: Kell Brook weighed in at 153 3/4 pounds on Friday for his 12 round scheduled fight against #7 WBA Mark DeLuca this Saturday night. Although Brook (38-2, 26 KOs) looked weight drained, and drawn around the face, he seemed cheerful ahead of his fight at the Sheffield Arena in Sheffield, England.

Brook’s younger opponent 31-year-old DeLuca weighed in slightly less at 152 3/4 lbs, but looked solid, and bigger than Kell. Both fighters are the same height at 5’9″, but DeLuca looked a lot thicker than Brook, and it’s hard to believe that he weighed less than him.

Featherweight contender Kid Galahad (26-1, 15 KOs) weighed in at 125 1/4 lbs for his 12 round co-feature bout against Claudio Marrero (24-3, 17 KOs). For his part, Marrero, 30, weighed in at 125 3/4 lbs. Both guys looked good. Galahad is coming off of a 12 round split decision loss to IBF featherweight champion Josh Warrington from last June.

For Brook, this is a make or break fight for him. He’s returning from more than a year layoff, and he’s made it known that he’ll be retiring if he loses on Saturday.

Even if Brook changes his mind about retiring, his career will essentially be over with as a major player in the sport. Some would argue that the 33-year-old Brook’s career has been over since his loss to Errol Spence Jr. in 2017.

Brook has just been dragging out the inevitable by fighting once a year against lesser opposition like Michael Zerafa and Sergey Rabchenko. DeLuca is a contender at 154, but not one of the blue chip guys in the weight class.

Hearn: Brook used to be massive name in British boxing

“It’s nice to be in Sheffield in bringing a guy [Kell Brook], who used to be a massive name in British boxing, who hasn’t boxed for over a year, so it’s always a little ‘will they [the fans] still come, and will they still believe us?'” said Hearn to secondsout on Brook’s fight with DeLuca on Saturday. “It feels like with this promotion, as time has gone on.

Brook has been out of it for so long, he’s got to prove to everybody that he’s the same guy that beat Shawn Porter in 2014 to become the IBF welterweight champion. It’s going to take more than beating DeLuca for Brook to prove his doubters wrong. He’ll need to beat one of the top 154 pounders in the weight class.

Brook could get title shot at 154

If Brook is successful tomorrow night, Hearn wants to match him against one of the following fighters: Amir Khan, IBF/WBA champ Jeison Rosario, WBO belt holder Patrick Teixeira or Liam Smith. Of those bunch Liam is the probable next opponent for Brook. Needless to say, it’s not going to be easy for Brook to beat a tough, rugged guy like Smith.

While Liam isn’t one of the talented guys like Rosario, Jermell Charlo or Julian Williams, he’s a solid contender, who can take a good shot, and can punch. Brook will need to be injury free, and ready to fight 12 hard rounds for him to beat Smith. In the meantime, Kell needs to win against DeLuca on Saturday for Hearn to look to match against one of the above fighters. 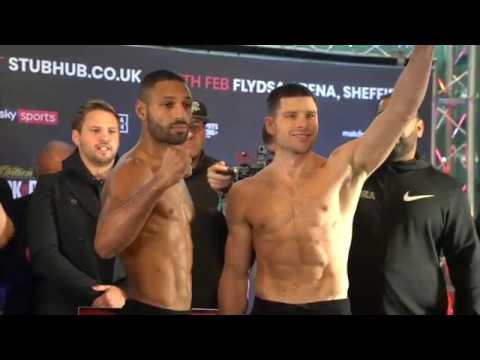 Kell was only at 50% in the past says Hearn

“So he will always be more important to me,” said Hearn in talking about Brook. “I had a lot more hair when I first started working with Kell Brook, because I’ve pulled it out,” said Hearn. Going up to his house, sitting in his lounge with his dad, telling him about the opportunities that he’s wasting, about the ill discipline that is causing him the chance of becoming one of the greatest British fighters of all time,” said Hearn in voicing his frustration with Brook.

“I’m just happy now that he’s facing up to that, because people don’t see that,” said Hearn. “Now that he’s said it, I’m happy to let people know, ‘You’ve been seeing 40% of Kell Brook, 50% of Kell Brook. As I said, when he boxed Shawn Porter, he took off about four lbs off on the day of the fight to make the check weight, and he beat him. He’s a freak of nature, Kell Brook. He’s a strong boy, but he hasn’t been living the life, and it’s cost him,” said Hearn.

Hearn is assuming that Brook will be a better fighter now that he’s supposedly “living the life” and training hard for his fights, but that may not be the case.

Joe Joyce: ‘Dubois will wake up with lumps all over him’ »