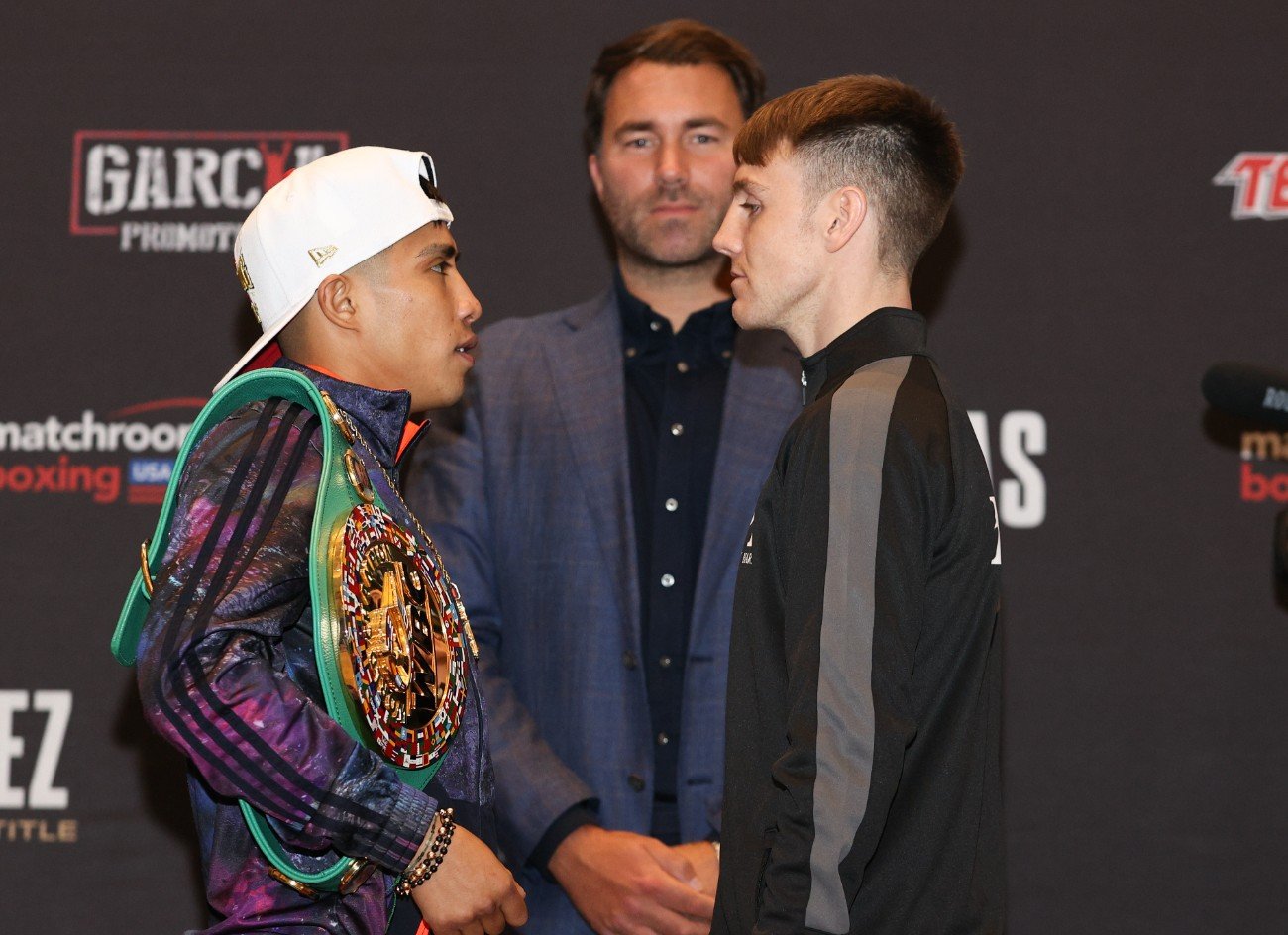 By Dean Berman: WBC flyweight champion Julio Cesar Martinez (15-1, 12 Kos) fights this Saturday on DAZN in defending against unbeaten #5 WBC Jay Harris (17-0, 9 KOs) at The Star in Frisco, Texas. Harris is vowing to pull off the upset by beating the heavy favorite Martinez.

This shapes up to be a difficult fight for the young 25-year-old Martinez, who will be fighting the unbeaten 29-year-old Harris.

This isn’t a soft touch that Martinez is fighting. Harris has recently captured the EBU, IBF Inter-Continental, and commonwealth flyweight title.

Martinez will get a good test by Harris

Harris has passed every test that he’s had, and has looked sharp in each fight. However, on Saturday, Harris will be facing the toughest battle of his 7-year pro career in challenging the young 25-year-old dynamo Martinez, who has been putting on great performances lately.

Harris will need to use his height advantage. The 5’5″ Harris appears to be a couple of inches taller than Martinez, who is listed at 5’4″. That can’t be accurate though because when Martinez was standing for the face-off, Harris looked to the bigger guy.

“I’m very excited for Saturday and going to put up a fight. We’re going to win,” said Martinez.

The talented Mexican fighter is coming off of a 9th round knockout win over Cristofer Rosales on December 20th to capture the vacant World Boxing Council flyweight title. This is the belt that was vacated by Charlie Edwards. Martinez fought Edwards last August in a fight that was ruled a no-contest.

Moments dropping Edwards with a hard shot, Martinez hit him with a body shot while he was down. Unfortunately, Edwards couldn’t resume fighting, and the fight was subsequently stopped. Martinez was interested in facing Edwards in a rematch, but nothing came of it.

The way that Martinez pummeled Edwards in the final moments of their fight, it wouldn’t be a good idea for those two to fight again. Martinez was hitting Edwards at will with shots. After Edwards took a knee, Martinez landed a powerful left hook to his right side while he was relaxed. Edwards rolled over in agony after receiving that punch. Edwards still hasn’t returned to the ring to resume his career since facing Martinez.

“I’m here to win and I’m going to pull off a massive upset on Saturday. It’s going be a hell of a fight. Tune-in on Saturday,” said Harris.

Eddie wants Julio Cesar Martinez to move up to 115

“He’s my new favorite fighter. I love him because he’s tiny,” said Hearn to Fino Boxing in talking about Julio Cesar Martinez. “He’s like 4’10”, and he doesn’t stop smiling. And he’s happy, but he’s like an animal. He’s so exciting.

“And for me, he’s fighting a very good fighter in Jay Harris, but I think this is a step too far for Jay Harris.

“I want to see Julio unify after this, and I think he can be the undisputed flyweight champion, and then I think he can move to super flyweight. He’s just got crazy power. I’m really enjoying working with him,” said Hearn.

Hearn is selling Harris short by saying that this is a step too far for him. He’s got a chance of beating Martinez if he can box him the way Joaquin Cruz did in beating him.

Although Martinez avenged the loss by beating Cruz in a rematch by a close 8 round majority decision, it wasn’t a narrow win. Martinez still fights the same way he did when he fought Cruz twice. Martinez’s last opponent Rosales shook him up a couple of times with hard shots.

It’s not going to be easy for Martinez when he moves up to super flyweight, because he’ll be dealing with some talented fighters in that division. These guys are considered the best at 115:

Estrada might be the best of the bunch, and the toughest due to his ability to box and slug. Rungvisai is dangerous because he can punch, and he does well against fighters that come at him. For Martinez to beat Rungvisai, he’d have to fight him as Cuadras did by using in and out attacks.

I also want to fly to his hometown and just watch him, because I find him a fascinating individual. He’s a crazy guy. I imagine him living a really simple life, but coming from a rough area, almost like a bit of a street kid, and tear away.

I want to see that because when you’re selling someone and promoting someone, to sell their story and understand them as an individual, it becomes a lot easier to tell that story and to sell that story. That’s what I want to do with him,” said Hearn of Julio Cesar Martinez.

It’s going to be hard for Hearn to turn Martinez into a star because he fights in a division that’s not a popular one with American boxing fans. For Martinez to become a star, he’ll need to move up to 115 and perhaps 118 and clean out those divisions. That won’t be easy to do for him, because there are a lot of skilled fighters up there.


« Keith Hunter works out in front of Las Vegas media