Josh Taylor fights on May 2 in Glasgow 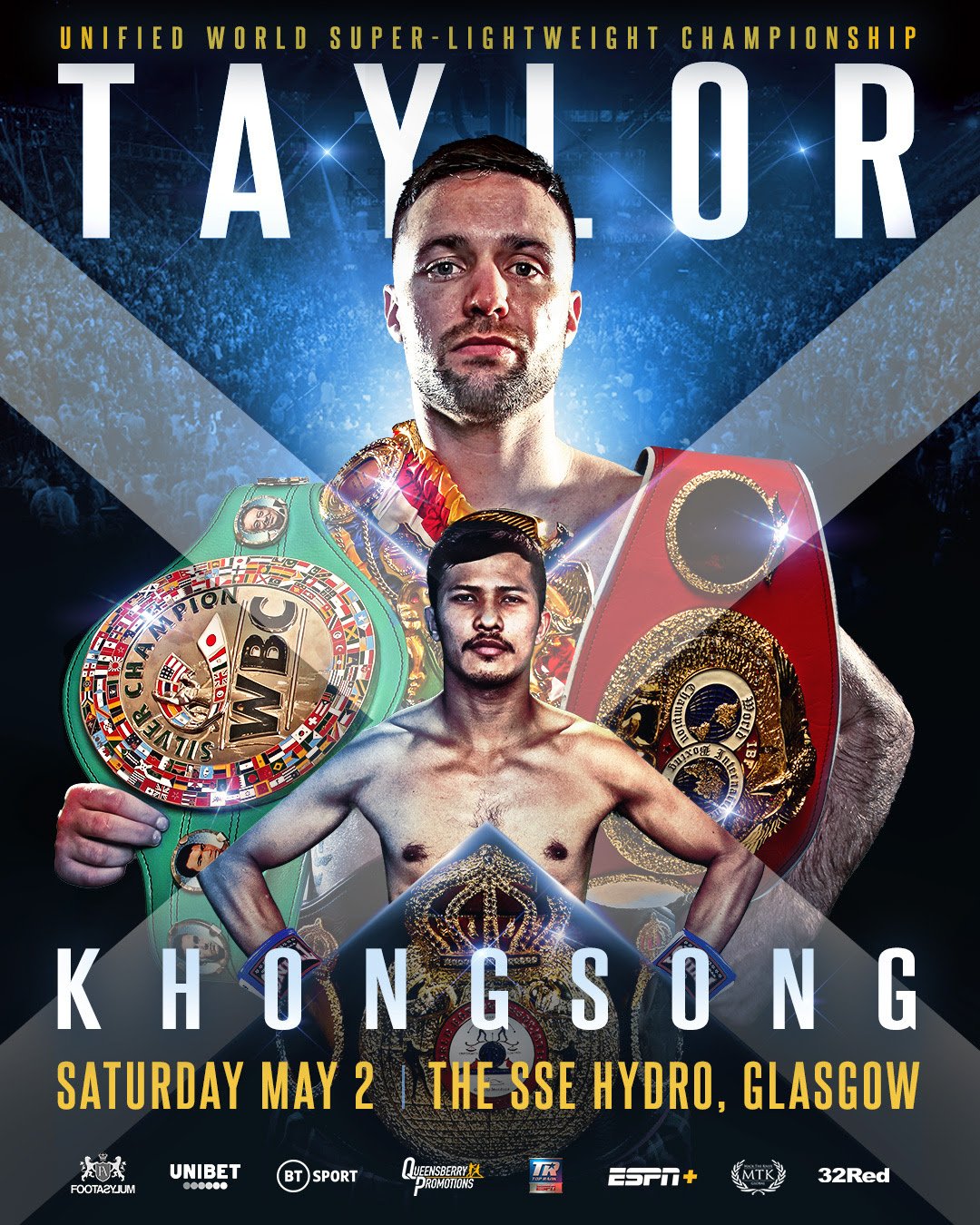 UNIFIED WORLD SUPER lightweight champion Josh Taylor will fight in Glasgow again, at the SSE Hydro, for the mandatory defence of his IBF title against the unbeaten Thai Apinun Khongsong on Saturday, May 2, live on BT Sport.

The event will be promoted by Frank Warren for Queensberry Promotions in association with Top Rank and will see The Tartan Tornado makes his first appearance in the ring since his triumph in the World Boxing Super Series in London, where he defeated the previously unbeaten Regis Prograis in the final to add the American’s WBA title to his own IBF version, while also claiming the WBSS trophy and the coveted Ring Magazine belt.

Taylor, now 16-0 (12 KOs), became world champion during the series when he defeated the then-unbeaten Ivan Baranchyk via unanimous decision in Glasgow.

“I am super excited to kickstart the new year with a fresh start and with a new team,” Taylor said. “It’s great to have the teams at MTK Global, Queensberry Promotions and Top Rank in my corner and I’m delighted to be fighting on BT Sport and ESPN+ and even more so that this is happening in Scotland in front of a home crowd who have waited so long for this! I can’t wait to get the ball rolling with a great performance.”

His opponent Khongsong, 16-0 (13 KOs) hails from Bangkok and worked his way into a mandatory position through his winning of the IBF Pan Pacific and IBF Asia titles. The Pan Pacific belt he has defended on three occasions.

Promoter Frank Warren said of delivering Taylor’s defense of multiple belts to his home nation: “I am delighted that we are able to be part of bringing Josh Taylor to Glasgow at such an important juncture in his career.

“Josh is destined for many big fights over in the States but he has got business to attend to first on the home front and this presents an opportunity for the Scottish fans to really get behind their man in huge world title action.

“I am also looking forward to returning to Glasgow where we have enjoyed many great nights in the past and I am thrilled we have secured Josh to perform on the BT Sport platform.”

NEWS:   Donovan vs Barrett & Courtenay vs. Ball this Friday, Aug.14

Josh Taylor’s promoter, Top Rank chief Bob Arum, added: “Josh Taylor is a truly special fighter who is set on becoming the undisputed 140-pound champion in 2020. I have no doubt he will put on a sensational performance for his home fans. I can’t wait for ‘The Tartan Tornado’ to return.”

MTK Global’s CEO Sandra Vaughan said: “We’re delighted to be working with BT Sport and ESPN+ to put on a show of this magnitude in Scotland with incredible talent, Josh Taylor. Josh is a true ambassador for Scottish boxing and we are thrilled to be working with him, and the teams at Queensberry Promotions and Top Rank to make this happen.”

Boxing » Press News » Josh Taylor fights on May 2 in Glasgow