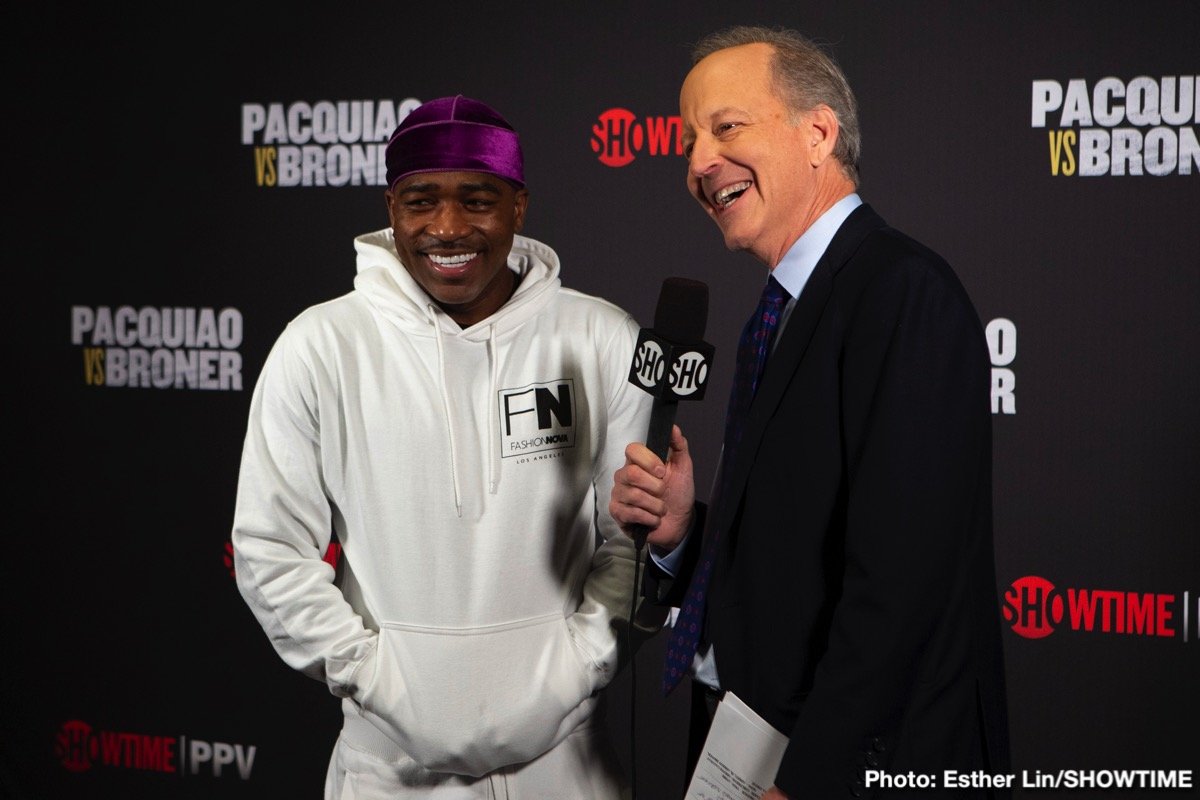 By Charles Brun: Setting up a fight between Devin Haney and Adrien ‘The Problem’ Broner remains high on Eddie Hearn’s To-Do list for Devin’s next fight. Broner (33-4-1, 24 KOs) let Hearn know last week that he would be interested in facing WBC lightweight champion Haney (24-0, 15 KOs) at 135 for the princely sum of $20 million from Matchroom. Just how far Hearn is willing to drop down from that price to sign Broner is unknown.

Hearn and Broner need to agree on the money

While Hearn has made it clear that he’s not going to meet the former four division world champion Broner’s asking price for the fight with Haney, he does still want to make that fight happen.

Haney is willing to move up eight pounds to welterweight to fight Broner at a catchweight at 143 lbs, which will put him at a disadvantage. Hearn is well aware that Haney will be taking a major risk with his career in facing the talented Broner.

As we saw in Adrien’s last fight against Manny Pacquiao in January 2019, he’s far from over-the-hill after 12 years as a pro. Broner gave Pacquiao a tougher fight than anyone since his 2015 loss to Floyd Mayweather Jr.

‘The Problem’ gave Pacquiao a harder fight bout than Keith ‘One Time’ Thurman did last July. The only thing that kept Broner from winning was he wasn’t letting his hands go enough in the first half of the fight against the Filipino star.

Haney-Broner = a breakout fight for Devin

According to the Matchroom promoter Hearn, that would be a “breakout fight” for the 21-year-old Haney, who hasn’t been matched against well known opposition during his 5-year pro career.

It’s crucial that Hearn sign Broner for Haney, since the California native has no prospects for big fights in the foreseeable future. With a win over Broner, Haney would receive an immediate surge in popularity. If nothing else, the casual boxing fans would at least know Haney’s name after the fight, thanks to the 31-year-old Broner’s ability to promote his fights with his trash talking

Broner will be a live underdog

“The Broner stuff was interesting because I really wasn’t going to do it. I thought, ‘You know what? He put my email out a couple of years ago,’ and I instant messaged him and told him, ‘I’m going to post this,’ and he was like, ‘Go for it.’ I think it was good for Devin [Haney],” said Hearn to IFL TV. “I like the fight, to be honest with you,” said Hearn about a match between Adrien Broner and Devin Haney.

“Because I think it’s a great breakout fight for Devin. It’s certainly the toughest fight of his career. With Broner, although he’s lost to the elite level, he can still really fight. It’s more a concern of how much money he wants, and how realistic he’s going to be about the money,” said Hearn.

Broner has gotten to the point in his career where he’s now become useful as a name guy for the younger lions to face. It’s a smart move for Broner, as it’ll extend his career by enabling him to get nice paydays that he otherwise wouldn’t get.

In facing a smaller and weaker guy in Haney, Broner presents the possibility of an upset. You wouldn’t even be able to call it an upset at this point, since Haney has faced no one of note during his five-year career. Haney has been in with six world class fighters, but none of them have elite level.

For that reason, it’s impossible to know how well Haney will hold up under the firepower of a seasoned pro like Broner. If Broner increases his punch volume from what we’ve been seeing from him, Haney is going to be in a world of hurt.

Haney will be giving up weight against Broner

“And more importantly, what weight he’s going to come in at, because he’s saying ‘135,’ but he hasn’t made 135 in years,” said Hearn on Broner. “But Devin would probably not, but Devin would fight him at 142 or 143 and that’s a big disadvantage for Devin, but he’s willing to do it, so we’ll see where it goes,” said Hearn.

Broner will need to be careful that he doesn’t price himself out of the Haney fight, because he’s not facing a guy that Hearn can pull in PPV buys from Sky Box Office the way he can do with his British fighters. Haney is from the U.S, and he’s not popular in the UK.

So whatever money that a fight between ‘The Problem’ and Haney pulls in will be from DAZN, and Broner’s ability to sell tickets. That’s one of the reasons why Hearn is interested in taking the Broner-Haney fight to the Bay Area, because it’s important that they sell tickets for this fight Hearn will need as much money as possible to pay for Broner’s purse.

“I want to take Devin to the Bay Area,” said Hearn about the location for the Broner-Haney fight. “That’s where he’s from originally. He obviously lives in Vegas now, so that’s an option as well. But the Bay Area has been starved of big fights ever since Andre Ward retired. There hasn’t been a great deal going on, and I feel that he could be a real break out star,” said Hearn.

We don’t know how well Haney can sell in the Bay Area, since he’s been fighting all over the U.S since he turned pro. Unlike Andre Ward, who was from Oakland, California and fought frequently there, Haney hasn’t been fighting in nearby San Francisco, where he was born. So even if Hearn stages the fight in San Francisco or Oakland, there’s no guarantee that Haney will be able to pull in the boxing fans to come see him fight.

It might be better for Hearn to stage the Broner vs. Haney fight in Las Vegas or Adrien’s hometown of Cincinnati, Ohio.

Andy Ruiz Jr. says he knows who his next opponent is – will announce soon »