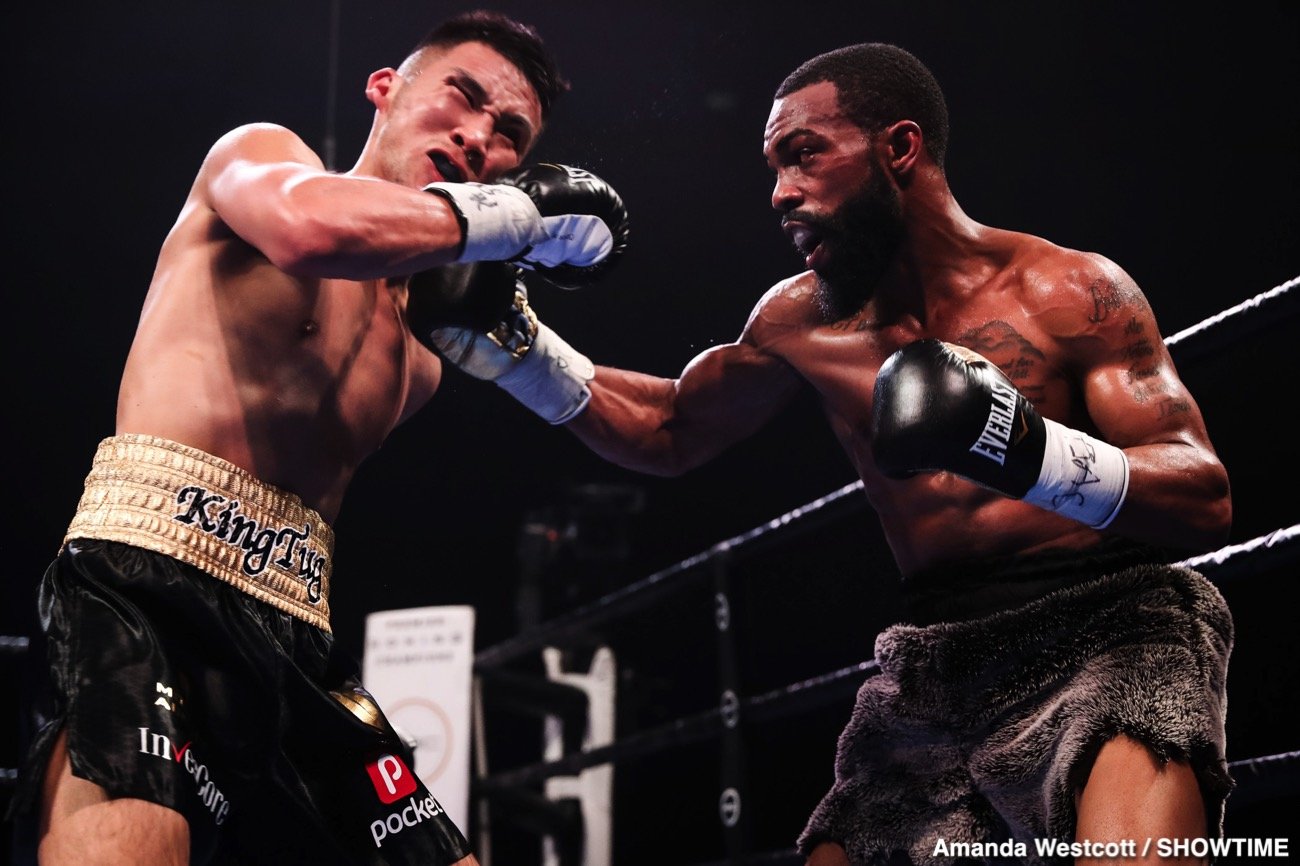 In the SHOWTIME CHAMPIONSHIP BOXING co-main event, 39-year old Guillermo Rigondeaux moved down in weight to win a world title in a second-division, capturing the vacant WBA Bantamweight World Title with a split-decision win against former champion Liborio Solís. Rigondeaux became the oldest boxer to win the world title at 118 pounds. The scores were 116-111 and 115-112 in favor of Rigondeaux with the third judge giving the fight to Solis, 115-112.

Russell (31-1, 18 KOs) made the fifth defense of his 126-pound crown by piling up rounds early, winning the first three frames on all three cards and out landing Nyambayar in the first four rounds according to the PunchStat Report.

“We put the work in every day in the gym,” said Russell. “I’m a perfectionist. We knew we had a very tough opponent and I knew he was going to bring his physical best. He had everything to gain and nothing to lose. We just focused and showed I’m one of the longest reigning champions for a reason.

“The difference was ring generalship, hand speed and boxing IQ. He only had 11 pro fights, of course he was an Olympic silver medalist, but he only had those 11 pro fights. I’ve had over 30 and I think my experience was enough to overcome and win this fight.”

Nyambayar (11-1, 9 KOs) significantly picked up his punch output in the second half of the fight, but believed that he waited too long for Russell to come to him.

Nyambayar admits it wasn’t his night

“It wasn’t my night,” said Nyambayar. “He was the better man tonight. I didn’t do my work the way I was supposed to. He is a great champion who fought a great fight. I made a mistake by waiting for him during the fight. I’d love the rematch if I can get it.”

The 31-year-old Russell is part of one of boxing’s premier fighting families as he is trained by his father Gary Sr. and brother Gary Allan. Earlier in the night, Gary Jr. worked the corner for his younger brothers, unbeaten super lightweight Gary Antuanne and undefeated bantamweight Antonio, who both posted convincing victories.

For Russell, who has held the WBC 126-pound crown since 2015, he plans to stay sharp in the gym and move up in weight in order to land a fight against another big name.

“We never take a day off,” said Russell. “I’ll probably be back in the gym next week. We’ll keep our wheels turning and stay sharp. If we have to move up in weight for these top fighters to feel like they have an advantage and take the fight, then we’ll do it.”

Rigondeaux (20-1, 13 KOs), a former unified 122-pound world champion and perennial member of the pound-for-pound list, scored an official knockdown in the seventh round as he battered Solis against the ropes.

“Liborio is an excellent fighter, but I saw the opportunity to strike and scored the knockdown,” said Rigondeaux. “He gave me a run for my money. It was a competitive fight, congratulations to him for keeping up in the ring, but everyone knows the better fighter got the win.”

Rigondeaux chose to box Solis after round 1

“I hurt him in the first round and that’s what caused him to run,” said Solís. “I’d like a rematch because I thought I got the better of him tonight. Going backwards is no way to win a vacant title. I put the majority of the pressure on him. I’m not going to argue with the judges, but I thought I did enough to win.”

“Like I’ve showed everyone before, I can fight right in the middle of the ring,” said Rigondeaux. “I tried that in the first round, but after that round, Ronnie Shields told me to show him some boxing and cut the ring off.”

“The punch surprised me on the knockdown, but I wasn’t hurt,” said Solís. “I was ready to fight immediately right after.”

After a successful bantamweight debut, Rigondeaux has his sights set on matchups against the top 118-pounders.

“I’m available for anyone who wants to get in the ring,” said Rigondeaux. “Who do the fans want to see me fight? I’m ready for any fighter. Now that I’m at my weight, let’s go hunting.”

In the telecast opener, Jaime Arboleda survived a knockdown to win an excellent action fight by narrow split-decision over Jayson Veléz in a WBA Super Featherweight Title eliminator. The scores were 115-112 for Velez and 114-113 twice for Arboleda.

The 12-round, 130-pound offensive slugfest saw more than 1,800-plus punches thrown—including more than 500 landed—with Velez picking up the action in the championship rounds. In the 12th, Velez connected with just over a minute left to send Arboleda to the canvas for the lone knockdown of the bout.

The 25-year-old Arboleda (16-1, 13 KOs) from Curundu, Panama, was fighting in the U.S. for the third time in his career. He had never been past nine rounds until tonight and won his sixth consecutive bout.

“Jayson Velez is a great fighter and has a great style,” said Arboleda. “He was trying to use that to break me down tonight. Velez has faced a lot of good fighters and I believe I belong with those fighters. I had him hurt badly a few times, but I just got a little bit ahead of myself and didn’t finish.

Velez vows to come back from defeat

“It was a clean shot on the knockdown but it happened because I wasn’t doing what I was supposed to (do) stylistically and with my footwork. I was a bit tired, but I wasn’t too hurt. I went right back to fighting.”

“It was a close fight, but I think I won the fight and it could have gone either way,” Velez said. “I think I knocked him down twice but they didn’t count one of them. It’s OK. I showed that I’m a warrior like always. I have six losses now but I’ve never been knocked down. I’m still here, and I believe I’ll be world champion someday.”

The event was promoted by TGB Promotions and Kings Promotions.

Kell Brook on Errol Spence: ‘He KNOWS I would beat him’ »