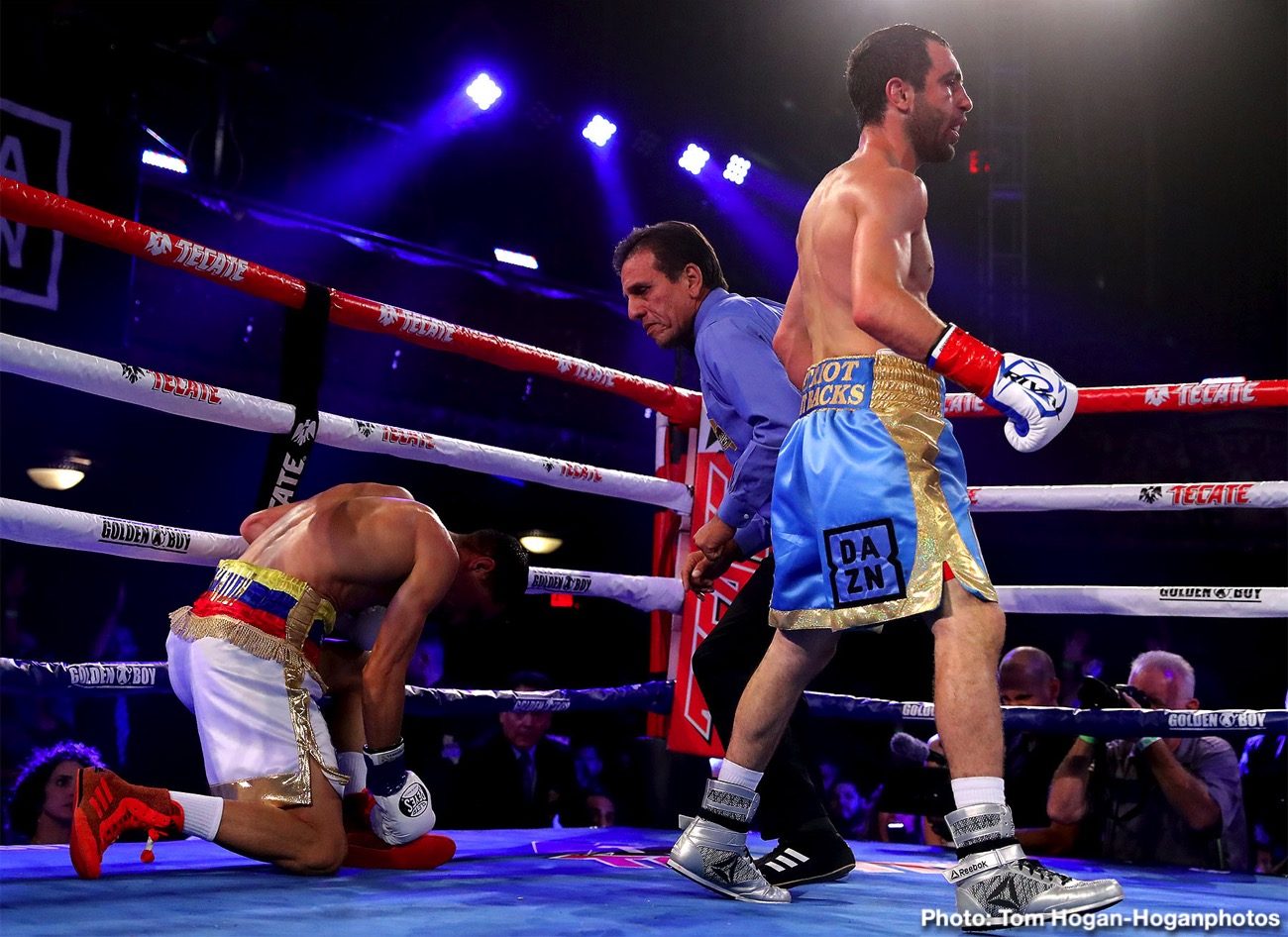 Explosive Armenian contender Azat “Crazy A” Hovhannisyan (18-3, 15 KOs) has extended his promotional agreement with Golden Boy ahead of his 12-round fight against Jose Sanmartin (30-5-1, 20 KOs) of Barranquilla, Colombia for the vacant WBA Interim Super Bantamweight World Championship. The fight will take place on the stacked undercard of Ortiz Jr. vs. Vargas on Saturday, March 28 at the “Fabulous” Forum in Inglewood, California and will be streamed live exclusively on DAZN.

Hovhannisyan is a 31-year-old slugger who is considered as one of the most exciting contenders in the 122-pound division. After victories against the likes of Ronny Rios and Sergio “El Frio Finito” Frias, the native of Yerevan, Armenia earned is first world title opportunity against Rey Vargas in May 2018. Hovhannisyan delivered an impressive performance, though he was unsuccessful. He is now coming off four knockout victories in a row, the last of which was against Franklin Manzanilla for the chance to fight for the WBA Interim Super Bantamweight Championship.

“Ever since signing with Golden Boy, my career has been taken to another level,” said Azat Hovhannisyan. “I got many great opportunities, including a fight against Ronny Rios and a world title challenge against Rey Vargas. Now that I’m fighting for an interim title on March 28, I’m happy to sign with Golden Boy again so we can score a great win and then look for even bigger fights!”

“Azat Hovhannisyan’s career is a perfect example of the outstanding way that we develop our talent,” said Oscar De La Hoya, Chairman, and CEO of Golden Boy. “Make no mistake, Hovhannisyan had a tough start to his career, despite being very talented. But, working together with his excellent team, we were able to hone his brutal instinct in such a way that would maximize his potential and make him into of the most dangerous contenders in the super bantamweight division. I’m positive that he will become a world champion.”

As previously announced, the March 28 event will feature a stacked card of action, headlined by the 12-round fight between WBA Gold Welterweight Champion Vergil Ortiz Jr. (15-0, 15 KOs) of Grand Prairie, Texas and Samuel Vargas (31-5-2, 14 KOs) of Bogota, Colombia.

Christopher Pearson (17-2, 12 KOs) of Trotwood, Ohio will participate in a 10-round middleweight bout against Gift Chiori (14-0, 11 KOs) of Riverdale, Georgia.

Raul “Cougar” Curiel (8-0, 6 KOs) of Tampico, Mexico will return in a 10-round welterweight clash.

Opponents for Curiel and Kaleiopu will be announced shortly.

Ortiz Jr. vs. Vargas is a 12-round fight for the WBA Gold Welterweight Title presented by Golden Boy. The event is sponsored by Hennessy “Never Stop. Never Settle.” The event will take place Saturday, March 28 at the “Fabulous” Forum in Inglewood, California and will be streamed live exclusively on DAZN.

Tickets for Ortiz Jr. vs. Vargas are on sale and are priced at $10, $25, $50 and $100. Prices do not include applicable facility fees and service charges. To charge by phone with a major credit card, call Ticketmaster at (800) 745-3000. Tickets will also be available for purchase at www.fabulousforum.com or www.ticketmaster.com.

Floyd Mayweather: ‘Deontay Wilder is STILL a winner in my eyes’ »