By Dan Ambrose: Yuriorkis Gamboa won’t be electing to have surgery to repair his torn right Achilles tendon that he injured last Saturday night in his 12th round knockout loss to Gervonta ‘Tank’ Davis. Former IBF/WBA featherweight champion Gamboa (30-3, 18 KOs) will rehab his torn Achilles for three months before he starts training, according to elnuevoherald.com.

It remains to be seen whether Gamboa’s choice of rehabbing over surgery will do the job repairing his Achilles. If not, then it won’t be surprising to see Gamboa needing surgery at a later date.

Yuriorkis injured in 2nd round

Gamboa injured his right Achilles in round 2 of his fight for the vacant WBA ‘regular’ lightweight title at the State Farm Arena in Atlanta. The injury took place when Gamboa was knocked down by the 25-year-old Davis.

Gamboa got back up, and continued to fight the best that he could under the circumstances. Unfortunately for Gamboa, he couldn’t generate power on shots with the injury, and he was forced to take a lot of punishment until the fight was stopped in the 12th.

“As I passed through the neutral corner, I felt as if I had been hit in the foot,” Gamboa said. “From that moment I felt a lot of pain, but I did not want or could leave. That is my warrior heart and it is something that I have demonstrated throughout my career ’.

Gamboa wants to return to the ring in 2020

The 2004 Olympic gold medalist Gamboa is expected to resume his career in 2020, as long as his injured Achilles has healed. It could be a long road back for Gamboa from this injury.

For non-athletes, a torn Achilles takes a lot of time to come back from. But for a boxer, who requires full strength in their ankles, it’s a lot tougher to come back quickly from this type of injury.

Gamboa is up there in age, and he cannot afford to be out of the ring for a prolonged period of time without it hurting his career. Gamboa has already missed a great deal of time in his career with long periods of inactivity.

Gamboa’s message to his boxing fans

“Thank you very much to my fans who supported me for this fight against Davis,” Gamboa said on his social media site. “Unfortunately, I broke the Achilles Tendon in the 2nd round, but I kept up to fight and win the fight. I promised them all of me and so it was. Now to recover and move on.”

Gamboa said that he wants a rematch with Tank Davis, but that’s probably not in the cards for him. Davis and his management at Mayweather Promotions will be looking at otther fights.

A lot of boxing fans believe it’s time for Gamboa to retire from the sport, as they point out that he’s no longer capable of winning world titles. His career hasn’t been the same since he moved out of the featherweight division in 2012.

Gamboa’s power carried a lot further than he was fighting at 126, and he’s not the same fighter at 135. If Gamboa could make 126 still, he might have a chance of doing something in that weight class, but definitely not at 135. 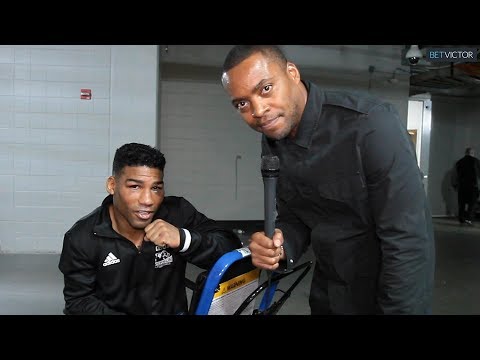 Andrade vs. Keeler undercard: Tevin Farmer vs. Joseph Diaz on Jan.30 on DAZN »