By Charles Brun: Tyson Fury doesn’t seem too eager to face the talented 6’7″ heavyweight prospect Bakhodir Jalolov after WBO president Paco Valcarcel said he wouldn’t mind seeing the two of them face each other.

The southpaw Jalolov packs dynamite in his left hand, and he’s highly accurate with that punch.

Jalolov, who comes from Uzbekistan, has amazing hand speed, excellent power, and is an outstanding combination puncher. The 25-year-old Jalolov does a lot of the same things Fury can do, but better.

Fury didn’t sound too excited about fighting the unbeaten prospect Jalolov when World Boxing Organization president Valcarcel said he would like to see the two of them fight in the future. Instead of showing enthusiasm in facing what likely a future world champion in Jalolov, Fury responded on social media with, “Haha.”

Jalolov is a highly skilled fighter already, and there’s a good chance that he would beat Fury even now if that fight were made. A lot of casual boxing fans might not be aware of Jalolov just yet, but they will. You can’t blame Fury if he doesn’t want to mix it with a young lion like Jalolov, because this guy would be a real problem for him.

Jalolov now lives in Brooklyn, New York, and he recently won a gold medal in the 2019 World Championships.

The 6’7″ Jalolov competed in the 2016 Olympics, and looked impressive in giving Joe Joyce a run for his money. That was when Jalolov was only 21, and not the fighter he is today. He’s gotten better, and right now he would be a problem for any heavyweight in the division.

The light-hitting Fury would be at risk against Jalolov because of his size, accuracy and punching power. Jalolov rarely misses with his left hand, and he has enough power to stop anyone with that shot once he lands.

Since turning professional in 2018, the talented Jalolov has steamrolled his first six opponents in knocking them all out, and is on his way to quickly becoming one of the top fighters in the division.

It would be interesting to see if Fury and Jalolov face each other in the future. Jalolov is only six years behind the 31-year-old Fury, but that might as well be a lifetime. Fury has made so much money in his career since 2018, he might not hang around for too much longer to face the young lions like Jalolov. 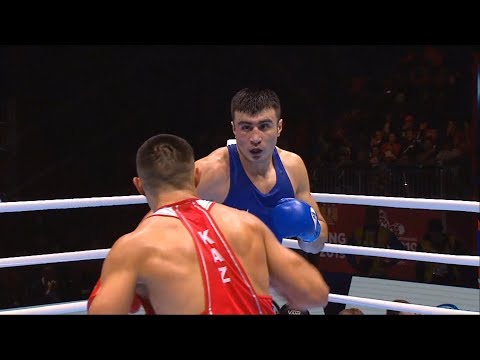 
« Oleksandr Usyk vs. Dereck Chisora in play for March 28 at O2