Tyson Fury in favor of Conor McGregor returning to boxing 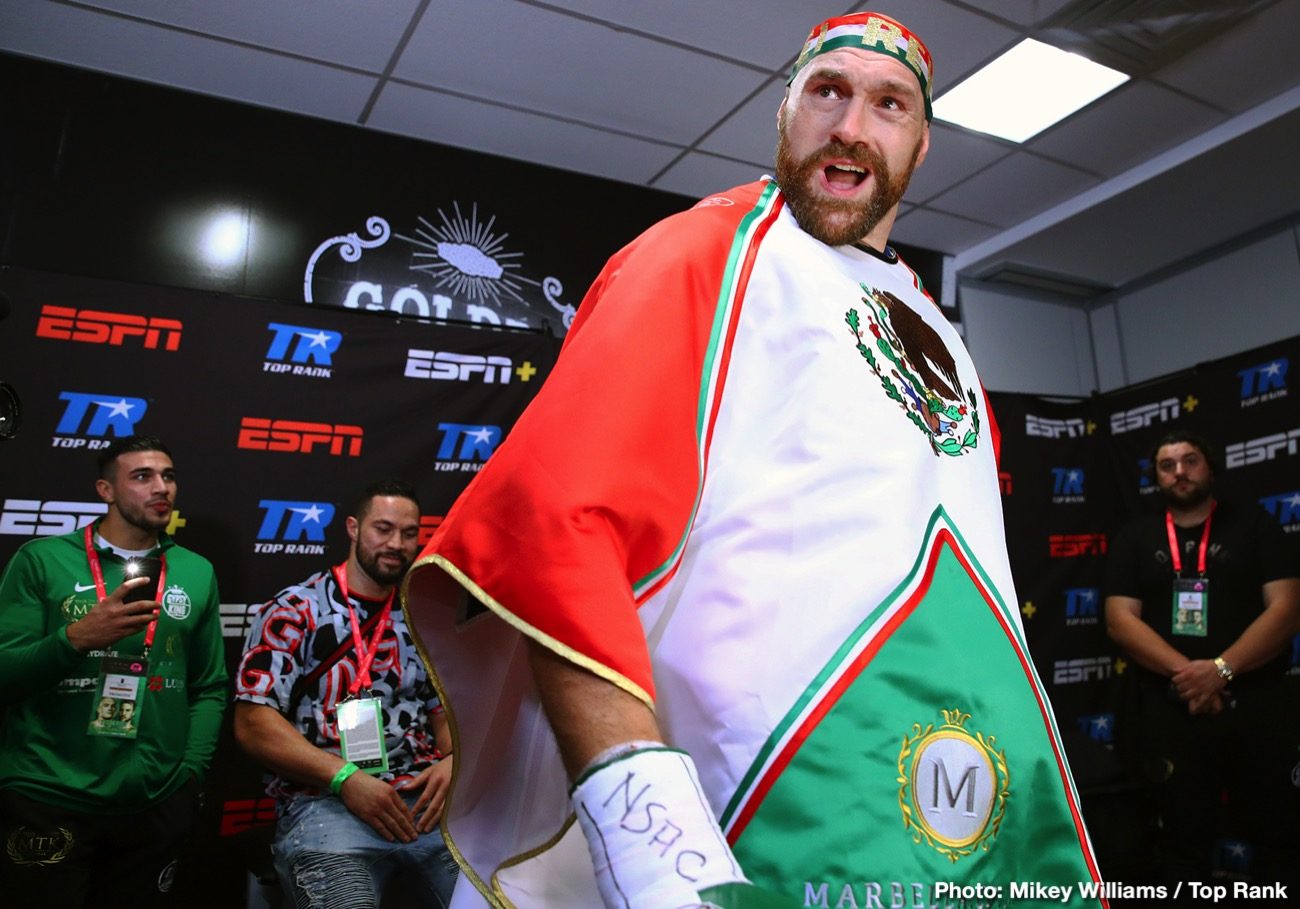 By Jeff Aronow: Tyson Fury is in favor of former UFC featherweight and lightweight champion Conor McGregor returning to boxing, be it against Floyd Mayweather Jr. or Manny Pacquiao. Fury believes it’s good for the sport to have the 31-year-old McGregor involved in fights against stars like Mayweather and Pacquiao, since it brings in a lot of interest and money.

In recent polls, the majority of the fans aren’t in favor of McGregor fighting the likes of Mayweather or Pacquiao. Fans point out that McGregor has no background in boxing, and he looked lost against Mayweather in their fight in 2017 in Las Vegas.

Mayweather stopped McGregor in the 10th round in a fight that looked like it was fought in slow-motion. Indeed, many fans felt that Mayweather intentionally carried McGregor in order not to anger the many people that had paid steep prices to see the fight on pay-per-view.

One way for fans to be open-minded about McGregor fighting superstars like Pacquiao and Mayweather in glorified mismatches is to see those fights as celebrity matches, and not serious ones. It’s all in fun, but there’s obviously no real sporting value.

McGregor might as well be tennis player or professional golfer taking on Mayweather, because he’s got about as much chance of beating him as athletes from those sports. McGregor stands no chance against any top boxer, but he makes it fun with the way he trash talks.

“If you want to box, let him do it,” Fury said to ESPN.com about McGregor. “I think he did a good job against Floyd Mayweather. He did as well as anyone else, really. He was catching Mayweather with some good punches. I think it is excellent for boxing and fantastic for combat sports.

“I would like to see it, because it is what people want to do with their lives,” Fury said. “Who am I, who are you or who is someone to say that someone should not do what he wants to do in his life?”

Fans would be more inclined to give McGregor a pass if he actually earned a fight with Mayweather and Pacquiao instead of it being given to him. There are many boxers who have been eager to fight Mayweather and Pacquiao their entire careers, and they’ve not had the chance. McGregor goes straight to the top without earning a fight against those two, and it’s perceived as being unfair in the eyes of fans.

McGregor didn’t do well against Mayweather

At the time of Mayweather’s 10th round knockout of McGregor, he was ahead by the following scores: 87–83, 89–82, and 89–81. Mayweather landed 170 of 320 shots for an absurd 53% connect rate.  That’s an incredibly connect rate, but it’s also not surprising given that Floyd was fighting a novice in boxing.

McGregor’s background in MMA was no preparation for him to compete in an entirely different sport against one of the best of all time.

Granted, Mayweather was nowhere near the fighter he once was when he fought McGregor in 2017, but it didn’t matter. He didn’t need to be great because he was fighting a guy with no skills, and no background in the sport. Again, Mayweather might as well have been fighting a professional golfer on the night, because it was the same thing. There was only going to be one winner.

Fury says McGregor brings money to U.S in his fights with Mayweather or Pacquiao

“If McGregor fights Pacquiao or Mayweather, it creates a great show in Las Vegas…It creates jobs for people. Bring money to Las Vegas, money to the States United,” said Fury.

Tyson is right about McGregor helping bring money to the U.S through tourism, and views that as a big positive. However, there’s something off-putting about someone with no experience in the sport of boxing being able to fight against the very best in fights that are sanctioned as professional matches. If you look at it from a different angle. What if a flag football team from wanted to compete against the Super Bowl winner in the NFL, and they were given permission.

How would that look in the eyes of the fans? Wouldn’t it cheapen the sport. You could say the same thing about Major League Baseball. Would fans be happy to see a local Little League team take on the World Series Championship team? It wouldn’t be fair, and it would be viewed as pathetic. Unfortunately, fans would still be interested in seeing it, but it would have zero sporting value. It’s a race to the bottom. How low can you go?