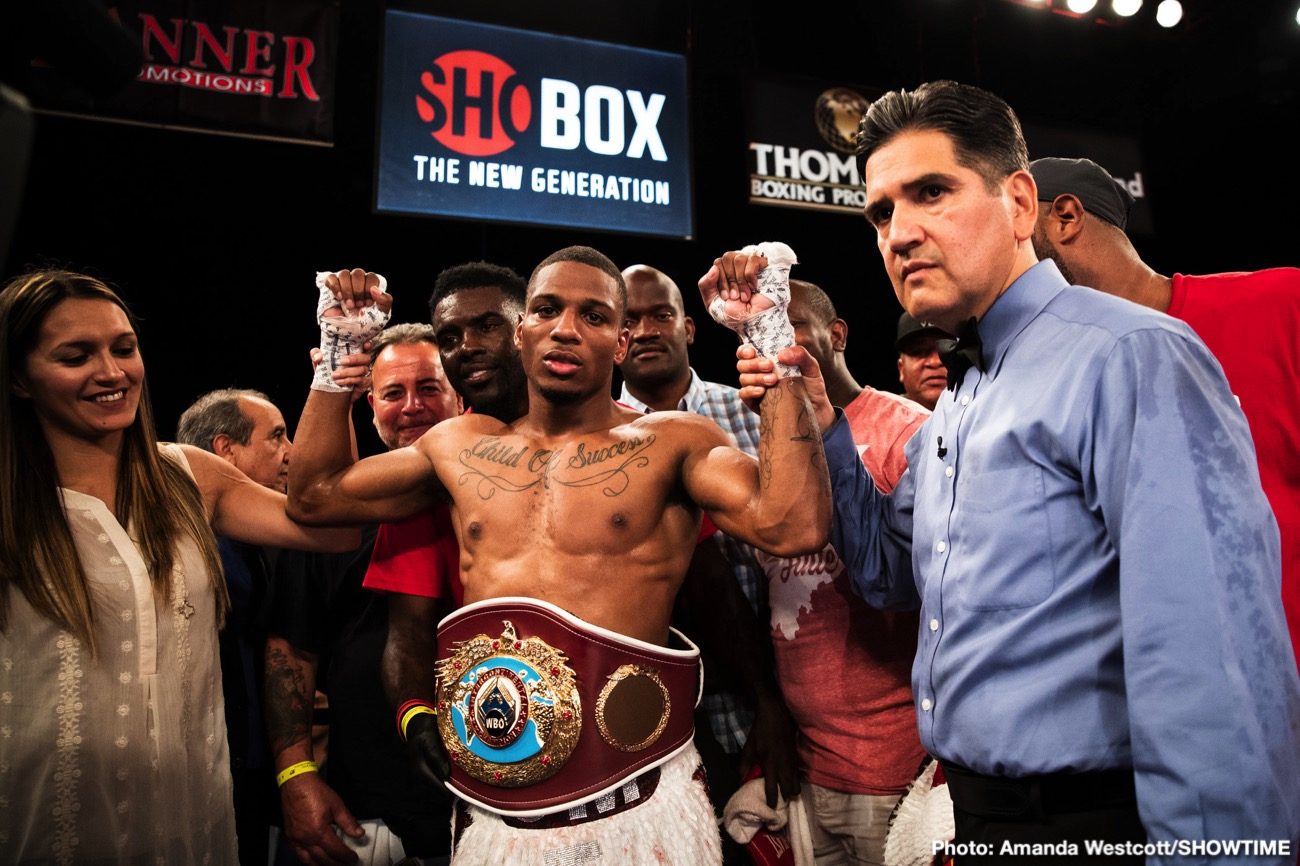 Rising lightweight prospect Thomas Mattice will face hard-hitting Isaac Cruz Gonzalez in the 10-round main event of ShoBox: The New Generation on Friday, February 14 live on SHOWTIME from 2300 Arena in Philadelphia.

The four-fight telecast is the third of four ShoBox presentations over six weeks showcasing some of boxing’s brightest young prospects in their toughest tests to date, including super lightweight prospect Shohjahon Ergashev and super middleweight Vladimir Shishkin, who were victorious on January 17. On January 31, featherweight Ruben Villa and welterweight Taras Shelestyuk will be tested and on February 28, super lightweight Malik Hawkins and welterweight Richardson Hitchins face tough opposition.

Tickets for the event, which is promoted by GH3 Promotions and King’s Promotions are $100, $75 and $50 and be purchased at www.2300arena.com

Cleveland’s Mattice (15-1-1, 11 KOs) is coming off his most significant win to date, an eight-round TKO of previously undefeated Michael Dutchover last September on ShoBox. The fight was stopped due to a deep gash on Dutchover caused by a clean right hand from Mattice. The judges’ scorecards were split at the time of the stoppage. Mattice will be making his sixth start on the prospect developmental series, including a close loss to Will Madera in 2019, a split decision win and a split draw with Zhora Hamazaryan in 2018, and a knockout of Rolando Chinea. The 29-year-old hopes a convincing win over the top-10 ranked Gonzalez will move him closer to a world title shot.

“A win would be huge for my career and put me in a great position,” Mattice said. “It would put me in the conversation with the top dogs of the division. I have to put on a great performance and let all those top fighters know that I’m here and ready to fight anyone. It’s a must-win for me, but it’s a big fight for both of us. He is ranked No. 7 by the IBF so this has the feel of a big fight. I think a win would put me in the top-10.”

Gonzalez (18-1-1, 14 KOs), of Mexico City, has scored knockouts in 11 of his last 14 fights since suffering only loss of his career in just his sixth professional fight. The 22-year-old owns a career-best knockout of former interim world title challenger Jose Felix Jr. in 2018. Currently ranked No. 7 by the IBF at 135 pounds, Gonzalez made his U.S. debut in December on the non-televised undercard of the Jermall Charlo vs. Dennis Hogan event at Barclays Center in Brooklyn last December.

“I am excited to be fighting in the United States and I am thrilled for my fight to be shown on SHOWTIME,” said Gonzalea. “So many fighters started their career on ShoBox and have become World Champions.”

Aleem compiled a 65-10 record as an amateur and was a five-time Golden Gloves State Champion in Michigan. He finished third at the National Golden Gloves in 2010 and 2011 before turning professional in 2011. The 29-year-old recently relocated his training camp to Las Vegas, where he has sparred with Jessie Magdaleno, Nonito Donaire and Jhack Tepora. Aleem, who is trained by Terry Markowski, will face the toughest test of his career in the veteran Lopez.

“All my hard work is paying off and now I get to show it on the big stage,” Aleem said. “I am looking forward to earning new fans and staying on a roll. I know Lopez is a really tough fighter with something to prove. He’s been here before so I know he’s ready for the challenge. This is a steppingstone to ultimately get where I want to be, and that’s fighting for a world title, bigger paydays and more exposure. Ultimately, I don’t just want to win, I want to dominate. Winning isn’t good enough – I also have to look good while doing it.”

Lopez was an accomplished amateur who won six national titles and held a No. 1 ranking, but he has had an up and down career as a pro. The 29-year-old started his career with 15 straight victories yet he has suffered a few setbacks as his level of opposition has dramatically increased. Lopez was undefeated and one win away from challenging for a world championship before losing to current unified 122-pound champion Daniel Roman in a title eliminator in 2017 on SHOWTIME. Lopez, who will break his own record of ShoBox appearances when he steps into the ring for the eighth time, will face his sixth undefeated opponent on the series as he looks to get his career back on track.

“Aleem is a pretty good fighter, but I think my experience is going to be a factor,” Lopez said. “He hasn’t fought top-tier guys with the exception of Marcus Bates. I have been in the big fights and this is his first time doing this. I am on a three-fight winning streak and I have rededicated myself to the sport. I have a new trainer, Chato Martinez, and a whole new camp. I can’t wait to show that I am back.”

The flashy Love was an accomplished amateur who compiled a 174-13 record. The 25-year-old southpaw will return for his third test on ShoBox as he seeks a convincing victory. In his first bout on the series, he won a majority decision over Samuel Teah in 2018 and followed that up with a split draw a few months later against Kenneth Sims Jr. Love, who has sparred with Adrien Broner and Robert Easter Jr., will face what should be his most dangerous opponent in the fellow-undefeated Walton.

“Walton is a decent fighter, but I feel he is still green and he doesn’t have that much experience,” Love said. “I know he is tough, but I am taking this to the next level. He’s just a stepping stone. It’s exciting to fight under the bright lights. Some guys fold, but I was made for this. I am not looking past him, but this will take my career to the next level. We are both undefeated and not many guys take risks like this, but this shows I am a true fighter. My name is Montana “Too Pretty Love” and I am fighting on Valentine’s Day, so I will be giving a lot of love out on February 14.”

The 29-year-old Walton was born and raised in New Orleans, where he rescued his mother and sister from the flood waters of Hurricane Katrina when he was just 13 years old. Left homeless, the family relocated to Houston, where Walton competed as an amateur. Walton turned professional in 2014 and has been perfect through his first 16 fights, including a career-best win over former super bantamweight world champion Victor Terrazas in 2019. The boxer-puncher, who is trained by Bobby Benton and fought six times last year, will face the first undefeated opponent of his career in Love.

“I have seen Montana fight before. I know he is flashy in the Adrien Broner mode, but other than that I do not know too much about him,” Walton said. “This opportunity is a blessing. The world is going to get to see me and hear my story. I’m from New Orleans and it was a struggle for me growing up, so this is a great opportunity. I never in a million years thought that I would be in this position. I just need to seize the moment and get the victory.”

Just 20 years old, Colemon started boxing at the age of 4 and honed his craft at the original Kronk Gym under Emanuel Steward until his passing in 2012. Colemon had a 135-fight amateur career and was a four-time national amateur champion in the junior division. He turned professional when he was 18 years old and has eight knockouts in his first 11 professional fights. Colemon, who is trained by Marlon Thomas, will face by far the toughest test of his career in Jackson, a fellow undefeated yet untested prospect.

“I am physically and mentally prepared more than I ever have been,” Colemon said. “I know Jackson is undefeated and tough, so I know I’m in for a big test. This is the next step in my career, and I feel that I will be not only the next great champion that has fought on ShoBox, but the next great fighter out of Detroit. I am ready to show the world my talents. February 14 will put my name in the minds of boxing fans all over the world.”

The 31-year-old Jackson got a late start as a professional yet has been active, including three fights in 2019 and three in 2018. He has 12 KOs in 15 fights, including knockouts in seven of his last eight bouts. The Greensboro native will fight outside of North Carolina for the first time in his career when he takes on the undefeated Colemon.

“I know Colemon is tough, and he had a long amateur career,” Jackson said. “He will come to fight, but I prepare for anything. That is what this sport is all about. I am looking forward to showcasing my talent to the world.”