Scott Quigg vs. Jono Carroll on March 7 in Manchester, UK 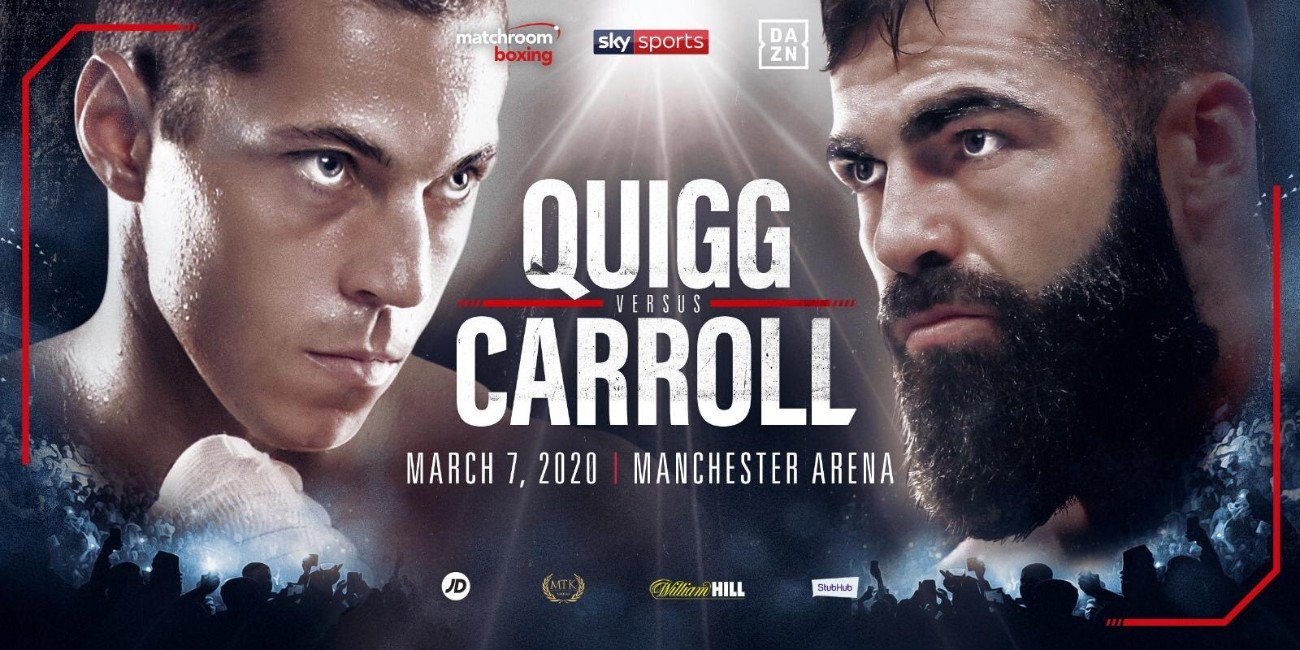 Super-Featherweight contenders Scott Quigg and Jono Carroll will meet in a huge England vs. Ireland clash at Manchester Arena on Saturday March 7, shown live on Sky Sports in the UK and DAZN in the US.

Former WBA Super-Bantamweight ruler Quigg (35-2-2, 26 KOs) returns to Manchester to pursue his dream of becoming a two-weight World Champion. He made five defences of the WBA crown before losing out to Carl Frampton in a Unification battle at Manchester Arena in 2016.

The Bury man was outpointed by Oscar Valdez in an attempt for the Mexican’s WBO Featherweight World Title at the StubHub Center in Carson in March 2018 but now has his sights set on a World Championship at Super-Featherweight.

‘King Kong’ Carroll  (17-1-1, 3 KOs) is on the hunt for a second shot at world honours after he returned to action with a win over Eleazer Valenzuela in Mexico following his spirited World Title challenge in Philadelphia in March against IBF Super-Featherweight king Tevin Farmer.

“I’m looking forward to making my return after having 16 months out the ring due to the injury I suffered early last year,” said Quigg. “Unfortunately the injury reoccurred before the Saudi Arabia show but the arm is fully healed now and I’m already in great shape about to start camp.

“This is a fight I’m really excited about. I’m looking forward to getting in there and taking him apart and showing that despite being out the ring for over a year and the injury, there is still a lot left in the tank.

“I’ve got everything fully focussed on March 7 to put in a career best performance! It’s great to be back fighting and headlining at Manchester Arena again and for my supporters to be able to see me back fighting on UK soil. It’s a great platform for me to launch my career forward again and get my name back in the mix for a World Title shot.”

“I haven’t necessarily learned anything extra about Scott Quigg since we were first due to fight, but I have learned more about myself – how much I want this life and what I’m willing to give up in order to accomplish my dreams and goals,” said Carroll.

“And I understand I need to be ready all the time and so does my partner, so I was training the day before Christmas and then I jumped on a plane out to America to help Tevin Farmer prepare for his fight the day after Christmas.

“I love Christmas and I just bought my first house in Spain, so it was quite special to wake up in my own home on Christmas morning and appreciate what’s around me.

“Now it’s time for the next step. I know my worth as a person and as a boxer. I won’t let Quigg beat me no matter what type of fight it has to be. I’m good at adapting so I will see what he’s good at and then take that away from him.”

Adam Smith, Head of Sky Sports Boxing, said: “It’s brilliant to be back in Manchester as Scott Quigg and Jono Carroll, two all-action fighters, meet in a must-win crossroads clash.

“We’ve followed Scott’s exciting journey to a World Title, while Carroll still believes he can succeed at the highest level following a courageous loss to IBF champion Tevin Farmer.

“It’s going to be another breathless battle between Quigg and Carroll, with more big names to be added to the bill in the coming weeks.”

An announcement on tickets and undercard information will be made next week.