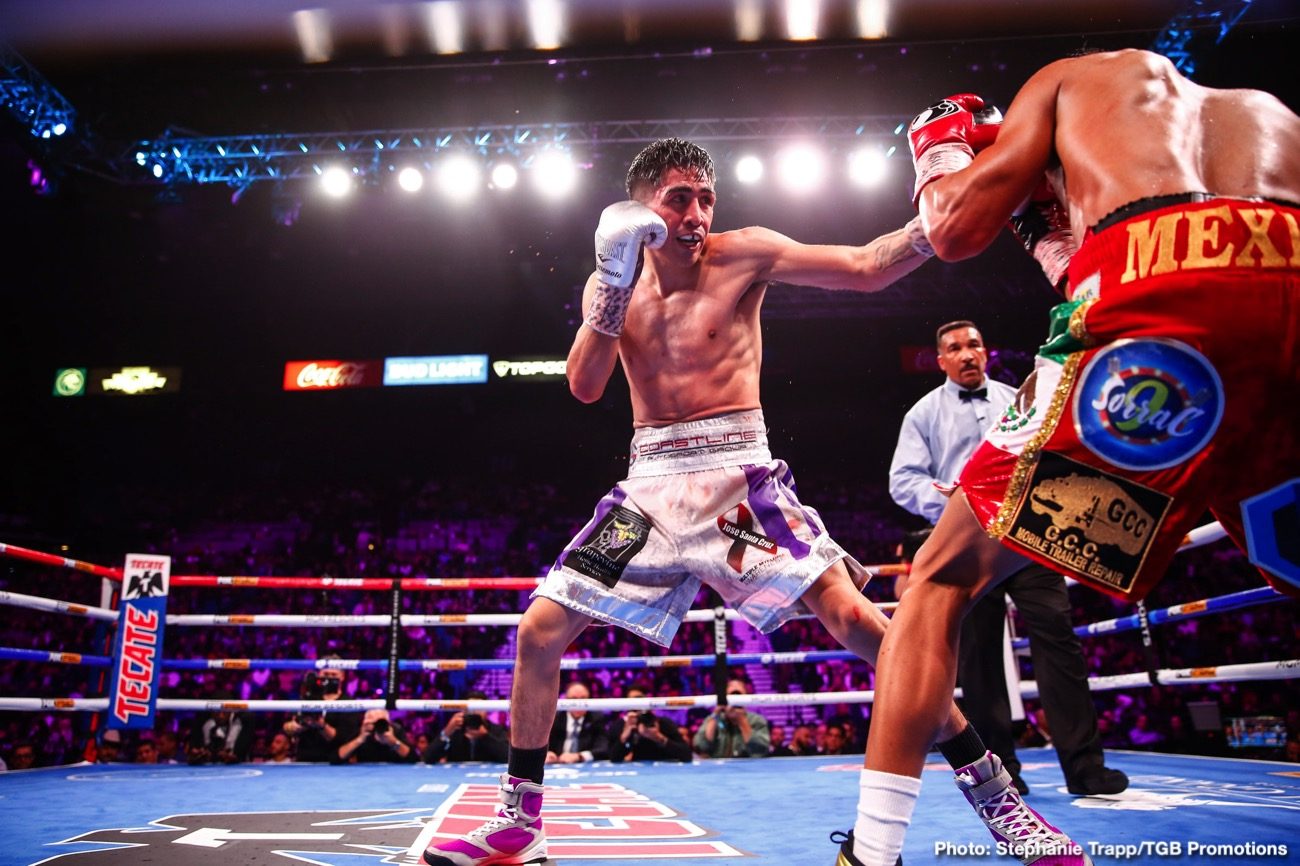 By Dan Ambrose: Leo Santa Cruz told PBC he wants to take on Gervonta ‘Tank’ Davis in his next fight, but he wants the match to take place in the super featherweight division.

Tank Davis (23-0, 22 KOs) moved up to the lightweight division last month, and defeated Yuriorkis Gamboa to capture the vacant WBA 135-lb title.  Davis didn’t look so good in that fight. He looked tired, and took him longer than expected to finally stop the 38-year-old Gamboa, who suffered an Achilles injury in round 2.

Tank Davis vs. Santa Cruz would arguably be a CASH OUT type of fight for Leo, because he doesn’t look like he’s got much time left as a top fighter. Davis would be doing Santa Cruz a favor by fighting him, but he wouldn’t get much credit for beating him. There are far better fighters at 135 than Santa Cruz, like Vasily Lomachenko, Devin Haney and Ryan Garcia.

The fight showed that Santa Cruz, who is a volume puncher, lacks the power to stop super featherweights. Ultimately, what that means is that Santa Cruz will need to be able to go the full 12 round distance to beat fighters like Gervonta Davis,

Santa Cruz: A fight with Davis will happen

“My New Year’s resolution is to get the Gervonta Davis fight,” said Santa Cruz to Premierboxingchampions. “I think a Davis fight is going to happen. He has good power, but I don’t care. I want to show the fans I’m not scared of anybody. He’s the most dangerous and popular fighter right now. The 130-pound division is my preference. I’m going to get better at that weight,”

This would be a risky fight for Santa Cruz to take right now, given how poor he looked against Flores. Leo doesn’t have the pop in his punches to hurt Tank Davis, and that’s not going to change anytime soon.

News:
Gervonta Davis to his HATERS: 'Thanks for the support'

More importantly, Santa Cruz hasn’t taken a tough fight since his rematch with Carl Frampton in 2017, and he barely won that fight. Frampton tried to get Santa Cruz to agree to fight him in a big money trilogy match in Belfast, but he chose not to take it. Some boxing fans felt that Santa Cruz was scared to fight Frampton in his own country, despite the fact that he had come to the U.S for both fights against him.

Since his win over Frampton, Santa Cruz has taken soft fights against Chris Avalos, Miguel Flores, Rafael Rivera and Abner Mares. Yeah, Mares is a good fighter, but he was WAY past his prime when he fought Santa Cruz in a rematch that no one asked for in June 2018. Santa Cruz had already soundly beaten Mares by a 12 round decision in 2015, and it was pointless for the two to be fighting again.

Mares was no longer a relevant fighter when Santa Cruz fought him in the rematch. It was a business level fight. In other words, it was more about money than it being a fight between two of the best fighters at 126. Mares is no longer one of the best.

News:
Gervonta Davis to his HATERS: 'Thanks for the support'

Boxing fans wanted to see Santa Cruz take on WBC featherweight champion Gary Russell Jr., but the fight wasn’t made. Instead of Santa Cruz wasting time fighting Mares, Rivera and Avalos t 126, he should have taken on Russell Jr. in a unification fight. It’s pretty obvious why Santa Cruz didn’t take the fight with Russell Jr., as he likely would have lost badly to him. Russell Jr. is arguably on another level than Santa Cruz in terms of talent.