Keeler: I’ve got under Andrade’s skin 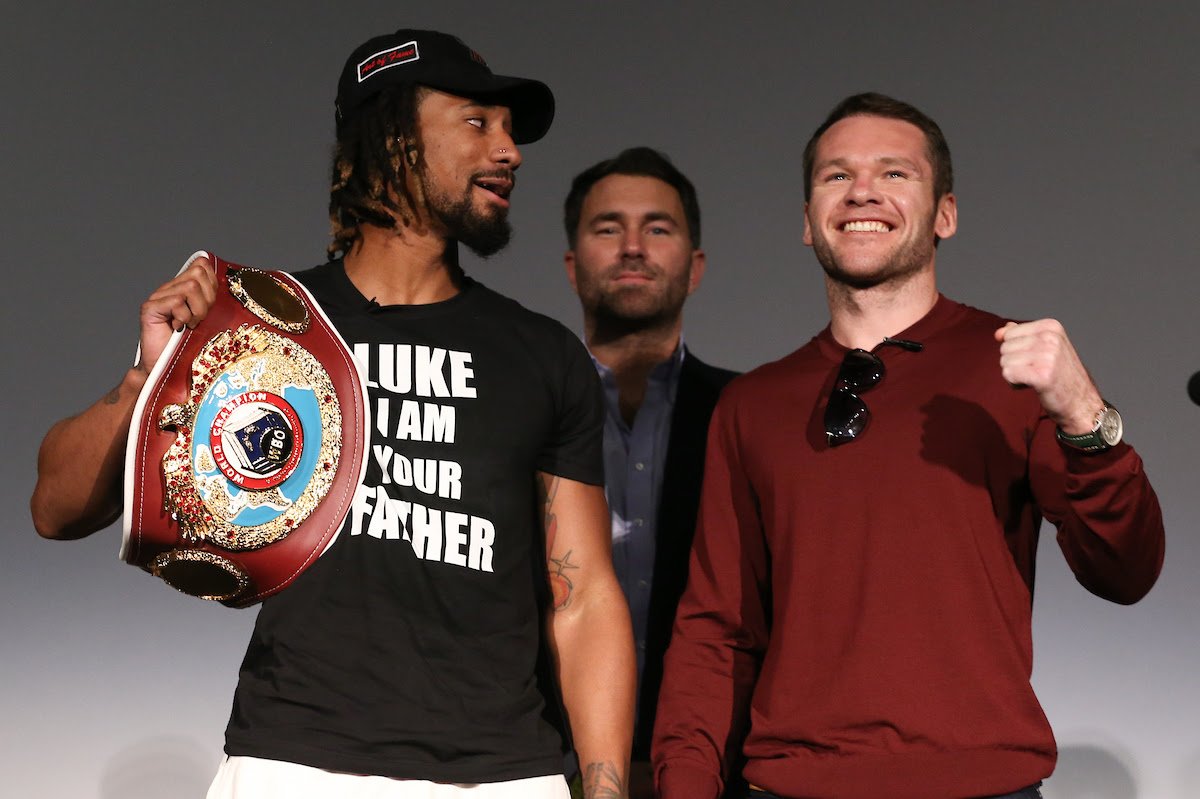 Luke Keeler claims he’s got under the skin of WBO World Middleweight champion Demetrius Andrade as they clash at the Meridian at Island Gardens in Miami on Thursday night, live on DAZN in the US and on Sky Sports in the UK.

Keeler (17-2-1 5 KOs) challenges for his first World title in Miami as two-weight World champion Andrade (28-0 17 KOs) makes the third defense of his strap, and as the two traded barbs at the press conference at the luxurious CMX Cinema in Brickell, Miami with further interviews taking place in the CMX Sports Bar in the venue, Andrade appropriately wore a t-shirt stating with Darth Vader’s famous line: ‘Luke, I am your father’ – with ‘Boo Boo’ saying he’s heard it all before from challengers for his crown.

“Luke, I am your father! Miami! Let’s get jiggy with it. It’s an honor to be here on this card with these guys. Kicking off Super Bowl weekend with a bang on DAZN. Luke Keeler, just like everyone else. They have the game plan; they say they can beat me and then they can’t. I had a great camp, spent a lot of time down here in Miami training. It’s my second home. Let’s put on a show. And remember Luke, I am your father.”

“Thanks everyone for coming and making this fight happen. There’s a tale of two halves with my career. People think this is an easy touch for Andrade. He stepped up to middleweight and he hasn’t been performing. He hasn’t showed me how great he is like he said he is. I labeled him delusional and I think it got under his skin. I am 32 but I am fresh. And I think his pro career has slowed him down. He’s not entertaining, he’s struggling. He talks like he is the greatest, but he isn’t. I am going to take that belt back to Ireland.”

“I am an entrepreneur at the end of the day. And I have a baker’s dozen in the influencer space which I take a percentage from. I have over a hundred people using my merch company. I’m off the YouTube stuff. And I am good.

“There are a lot of lies being told from their side. Two days from now, you will see the work that I put in.

“I wrote a book called ‘You Gotta Want It.’ It was top 10 on Amazon. I wanted to be a Navy Seal before I moved to LA to pursue acting and stuff. We can chop it up any single way, but I am going to win on Thursday night. I think it’s only going three rounds. Shane thinks that and so do I. This is boxing, we aren’t measuring hearts though, so I don’t care how big his heart is.

“I am here to avenge the Paul name. After I beat Gib, again he’s a stepping stone, I am going to fight KSI. After that, who knows? I love this sport. I don’t do anything I don’t love to do. So, I will see what the future holds. I will beat Gib and then fight KSI next.”

“I think he has tried to select opponents before, and this isn’t what he wanted. It’s going to be a rough night for him. I finessed my way into this fight. And I have nothing to lose. I want it really f**king bad. He has everything to lose on Thursday.”

“Jake has put the work in. He hasn’t just come to me randomly; it was that we were friends. I’ve known him a few years. I wanted to train him and show him the ropes. He can put in the work. He really loves the sport of boxing. The people he works with – they are all impressed by him and his talent in the ring.

“These guys have the desire. I won’t train anyone who doesn’t put in 100 per cent. He does that every single day. He’s working harder than a lot of professional fighters that I know. He has definitely put the work in. He is strong, he is fast, and he is ready to go.

“The toughness shows in sparring. I put him to the test. I didn’t make it easy for him during camp. He has no quit. I put him against guys at 154. Boxing is entertainment and this brings a lot of fans and followers to the sport. It’s great for the fight game. It will only grow the sport.”

“We are looking to repeat history again. IT was great to come out on the winning side of the KSI vs. Logan Paul fight. We broke down barriers. And we came out victorious. We will do it again.

“Gib is not the best boxer in the world. But neither was Marcos Maidana. I can compare Gib to him because he has that rough element to him. He is tougher than a typical YouTube guy. I have hit him hard on purpose and he has taken those shots. I don’t think Jake can hurt him.

“Gib fights unorthodox. It’s dangerous for his opponent because he can’t prepare for it really.”

“I don’t have much to say. I am going to be JoJo’s ass – flat out. Thanks to Eddie, DiBella, Matchroom and DAZN. Thanks for keeping me active. This is such a huge card. There are so many stars on this card, it’s amazing to be on there with all of these guys. I feel amazing. I don’t feel dried out, my weight is great. Miami weekend is going to be crazy after I win. I wanted to fight him and gave him this opportunity. I am tired of sweeping everyone out and kicking everyone’s ass, so I hope he brings it. He better bring it. I’ll probably sweep him though, but we will see on Thursday on DAZN.”

“Thanks to Eddie Hearn, Joe and DAZN, and Golden Boy Promotions. Thank you to my whole team. I have been through a lot in my career, a lot of ups and downs. It has made me who I am today. I know Tevin Farmer is a slick boxer, I know he is tough, but I am coming to take that title. I’ve talked a lot of shit; he has talked a lot of shit. We are going to back it up. This is history in the making and I am just happy to be alive and be a part of it. I know he’s making his fifth and his last defense. Tevin, I hope you are sleeping with that belt because it is going to be mine.”

“Thanks to Eddie Hearn’s Matchroom Boxing and Thompson Boxing for making this happen. I am thrilled to be on this world championship card. And I am going to make this the fight of the night again. I became the unified champion last year and I am going to keep it like that.”

“Thanks for supporting this event. Thanks to everyone who made this fight possible. See you January 30.”

“Since we are telling stories. I got a story about Devin Haney. I was at his house, I was like, ‘This is a dope fox statue.’ Devin says, ‘I don’t have a fox statue.’ I turn around and it is gone. Now it’s up on the wall. I take a stick and tell Devin to line him up and I hit it into the pool. His dad gets home and doesn’t believe us that there was a fox in the house. He thought we were just breaking shit.

“Thank you for this opportunity. My mother is Cuban, so it feels like home. Thanks for the opportunity. My Español is muy malo though. Thanks to the WBO, Matchroom and DAZN. Thanks to my UK geezers. They always say I need to fight better opposition and here it is. This is my time. Expect a funky, groovy night baby, yeah.”

“This is what you call a fight card. Unbelievable night of championship boxing. Three huge title fights from Miami on DAZN. We took over Super Bowl week.

“We added Amanda Serrano, seven-time champ, to the card. She is on a quest for the super bowl of women’s boxing against Katie Taylor in 2020.

“This card is so underrated. Everyone in boxing is talking about this card. The three world championship fights are all breathtaking. Danny Roman is a unified super bantamweight world champion. Murodjon Akhmadaliev is one of the most exciting young fighters. This is going to be an absolute war for the unified belts.

“Tevin Farmer is the most active world champion in the world. Period. This is first huge breakout fight. They said they were going to make this fight and here we are.

“Andrade is the best 160 pounder in the world. Everyone is saying it. Everyone comes in with a plan but they can’t even with rounds, minutes or even seconds. He has an interesting point. WBO ranked number two. If he pulls off the upset, he will go back to Ireland as a hero. He will look to topple the champion on Thursday night. It’s going to be a huge fight. And listen, if you don’t have DAZN then what on earth are you doing?”

“We look forward to delivering a stellar 2020 to our subscribers and this week’s championship tripleheader marks the deepest card of the boxing year so far.

“Demetrius Andrade looking to make a statement on a big stage and lure the division’s biggest names into career-defining matchups later this year. Tevin Farmer and JoJo Diaz competing in a can’t-miss grudge match. A guy in Danny Roman, who has been with DAZN since our U.S. launch, putting both of his belts on the line against a hungry, undefeated fighter in Akhmadaliev.

“In addition to a championship tripleheader, Thursday’s co-main event will see Jake Paul looking to avenge his brother’s loss by defeating Gib on his way to a fight with KSI.

“In terms of the interest this matchup is generating, our pre-fight show 40 DAYS has already been viewed nearly 4 million times on YouTube – and that’s a testament to the fan bases of these two individuals. They are businessmen, content creators and – for the first time on Thursday – professional fighters.

“And the only place you can watch it is on DAZN. Just download the app, sign up and enjoy. Thank you to the fighters for making the most of this opportunity, participating in a busy several days of media and creating great content on social. This is a noisy week but we feel confident that we’ll be able to cut through and draw a spectacular audience on Thursday night.”