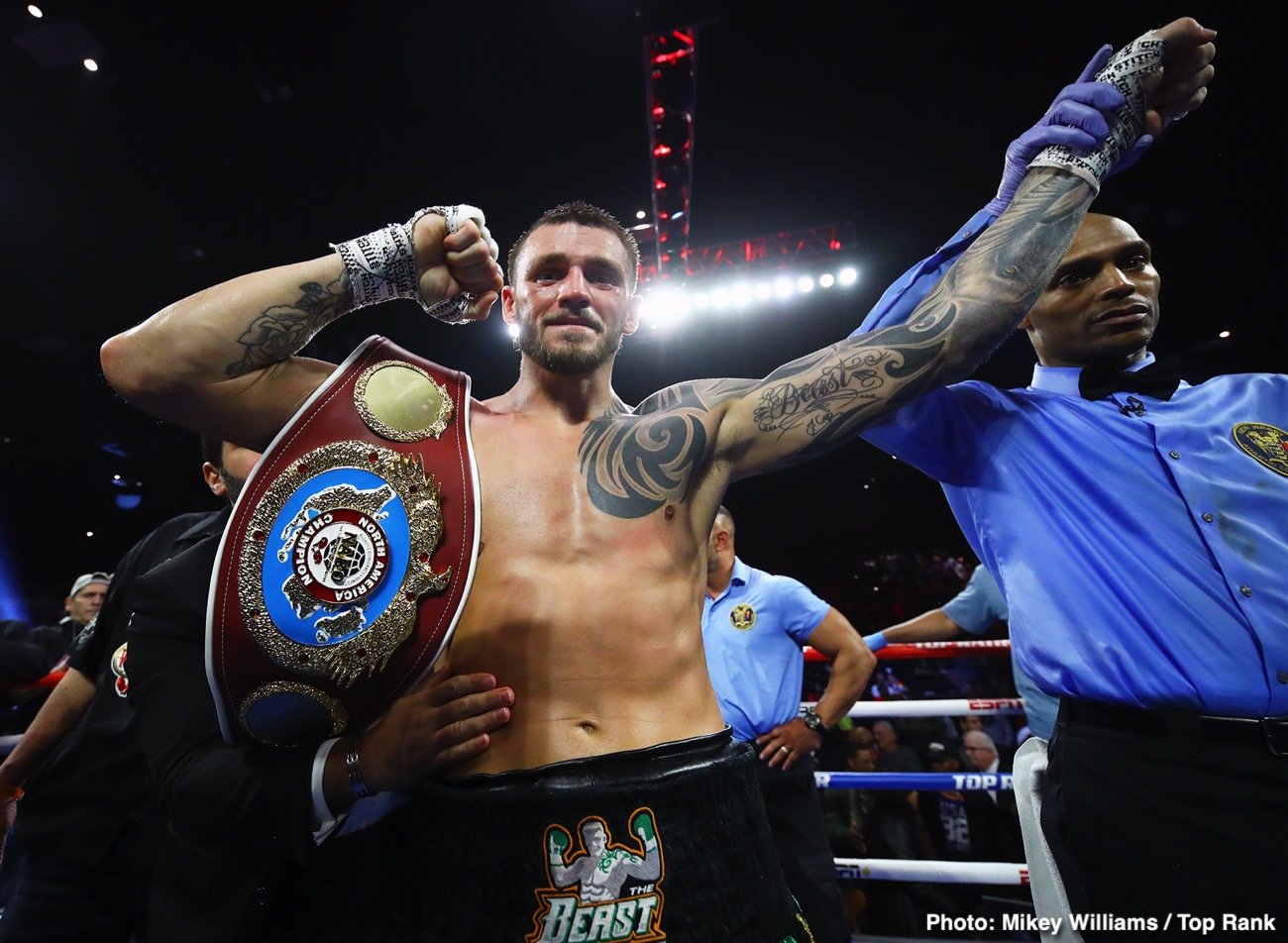 When JOE “THE BEAST” SMITH JR. (now 25-3 20KO’s) and JESSE “HOLLYWOOD” HART (now 26-3 21KO’s) stepped into the ring at the Hard Rock in Atlantic City on Saturday night, more than a victory and the NABO Light heavyweight title was on the line. With the WBO World Light Heavyweight title having been vacated in December, a potential 2020 world title opportunity also looms.

Joe Smith Jr. certainly took advantage of the opportunity, not only dominating Jesse Hart from start to finish, but once again showing why he is such a fan-favorite. From the opening bell, Smith Jr. made his dangerous intentions known, stalking Hart, ripping him to the body and head. In the second-round, Smith Jr. landed a short-left hook to the body that visibly unsteadied the Philly native, who immediately clinched to avoid an early night.

Hart, who entered the ring wearing an executioner mask in honor of his mentor, Bernard Hopkins – who Smith Jr. famously knocked out of the ring and into retirement in 2016 – was not shy about wanting to fight the Long Islander in honor of Hopkins. However, as the exciting main event marched on, Hart had no answer for the brute force and will of Smith Jr.

It wasn’t long before Smith Jr. had Hart in trouble once more, this time in the fourth-round, with a savage uppercut followed by a right hand to the temple that had Hart on edge once again. Like much of the fight, Hart would manage to clinch to avoid compounded damage.

After battering Hart around the ring, Smith Jr.’s effective work began to show, culminating in the seventh-round with a devastating sweeping right hand that landed flush, sending Hart to a knee. With only eleven seconds left in the round, Hart was able to survive the round.

“My career was on the line.” Said Smith Jr., “I had to come here and prove I belong.”

Over the final three-rounds Smith Jr. continued his overwhelming pressure, opening a cut over the left eye of Hart. It looked like Hart would be stopped in that round as well, but a 45 second doctor examination gave him some time to recuperate and avoid being knocked out, but nonetheless, Joe Smith Jr.’s continued his domination.

“I got two Philly guys now and it feels great,” Smith said. “It would have been nice to get [Hart] the same way [as Hopkins, via a knockout], but you can’t always do that” said Smith Jr. “He’s got a lot of heart, he’s very tough. He had the will to make it through the fight.”

Two judges, and the rest of the ringside observers saw the fight properly, 98-91 and 97-92 for Smith Jr., while third judge James Kinney, ridiculously and disgracefully had it 95-94 in favor of Hart. Smith Jr. earned the clear and complete victory, and the NABO Light Heavyweight Title.

What’s next for Smith Jr. is yet to be known, however a lot may be riding on the winner of the Eleider “Storm” Alvarez and Michael Seals fight, next Saturday January 18 from Turning Stone Resort Casino. “Light heavyweight is a hot division,” said Smith Jr’s promoter and CEO of Star Boxing JOE DEGUARDIA, “We will be there next week. Certainly the winner is a potential opponent for Joe. Whatever happens, this determined, all pressure, common-man has clearly re-established himself as a top light-heavyweight, and perhaps one of the most exciting fighters and humbling stories in boxing.”

As for what Joe Smith Jr. wants next, Smith stated: “Whatever my team thinks is best I will go with it,” Smith Jr. said “I never turn down a fight.”


« Abass Baraou Returns To Action On January 25 In Hamburg