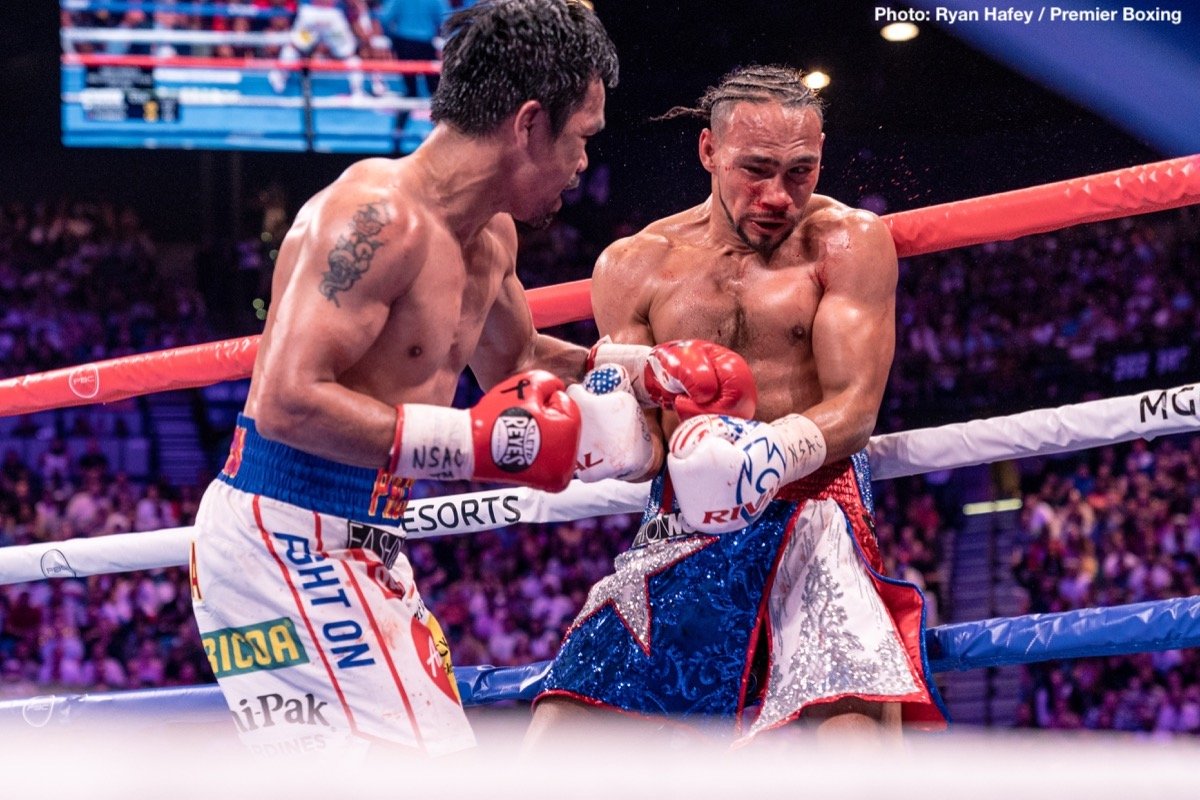 By Chris Williams: Errol Spence Jr. questions why the recently beaten Keith ‘One Time’ Thurman was included in the latest updated Ring Magazine welterweight rankings. Spence (26-0, 21 KOs), who Ring Magazine has installed at #1 at 147, said this after seeing Thurman’s name at #4 in the rankings:  “Why Thurman on here?” asked Spence on his Instagram.

Ring Magazine likely is ranking Thurman in their top 5 due to his distant past accomplishments rather than what he’s done lately. Thurman has wins over two of the Ring Magazine top 15 welterweights Shawn Porter and Danny Garcia. Those fights took place 3 to 4 years ago, and Thurman doesn’t look like the same fighter. You can argue inactivity, injuries, and soft living has taken a lot out of Thurman’s game.

The two years of inactivity that Thurman had following his win over Danny Garcia in March 2017 has seemingly taken a lot from his game. Thurman injured his right elbow, and needed surgery after that fight.

‘One Time’ Thurman was supposed to be out for just 6 months, but a year later, he still was licking his wounds.  He suffered a hand bruise that wiped out a fight with Jessie Vargas scheduled for May 19, 2018. When Thurman finally did return to the ring nearly 2 years after his fight with Danny Garcia, he struggled to beat Josesito Lopez by a 12 round majority decision on January 26, 2019.

There are a lot of younger fighters like Vergil Ortiz Jr. and Josh Kelly that deserve a spot in Ring Magazine’s top 10 rankings. Thurman just based on his last 2 fights, needs to earn his way back to the top. Right now, he’s resting on his past accoplishments that took place over 2,000 yesterdays ago.

BF/WBC welterweight champion Spence brings up a good question about the 31-year-old Thurman (29-1, 22 KOs), because he’s looked poor recently. In Thurman’s last two fights against Manny Pacquiao and Josesito Lopez, he’s looked like the shell of the fighter he once was during his best years of his career between 2012 to 2017. Thurman was arguably #1 at welterweight during those years.

NEWS:   Keith Thurman: 'I'm still at the top of the welterweight division'

Pacquiao hurt Thurman to the body

Thurman’s weakness in taking it to the body was exposed by Pacquiao more than once in that fight. In the 10th round, Pacquiao hurt Thurman with another hard body shot. Although Thurman didn’t go down, he was clearly hurt from the punch to the midsection from Manny. Thurman somehow was able to run around the ring after being hurt, and his mouthpiece was sticking out while he tried to catch his breath.

Starting the decade with 4 of the world’s Top 5 Welterweights repping PBC. 💪


« Gennadiy Golovkin begins training at SNAC for next fight in March