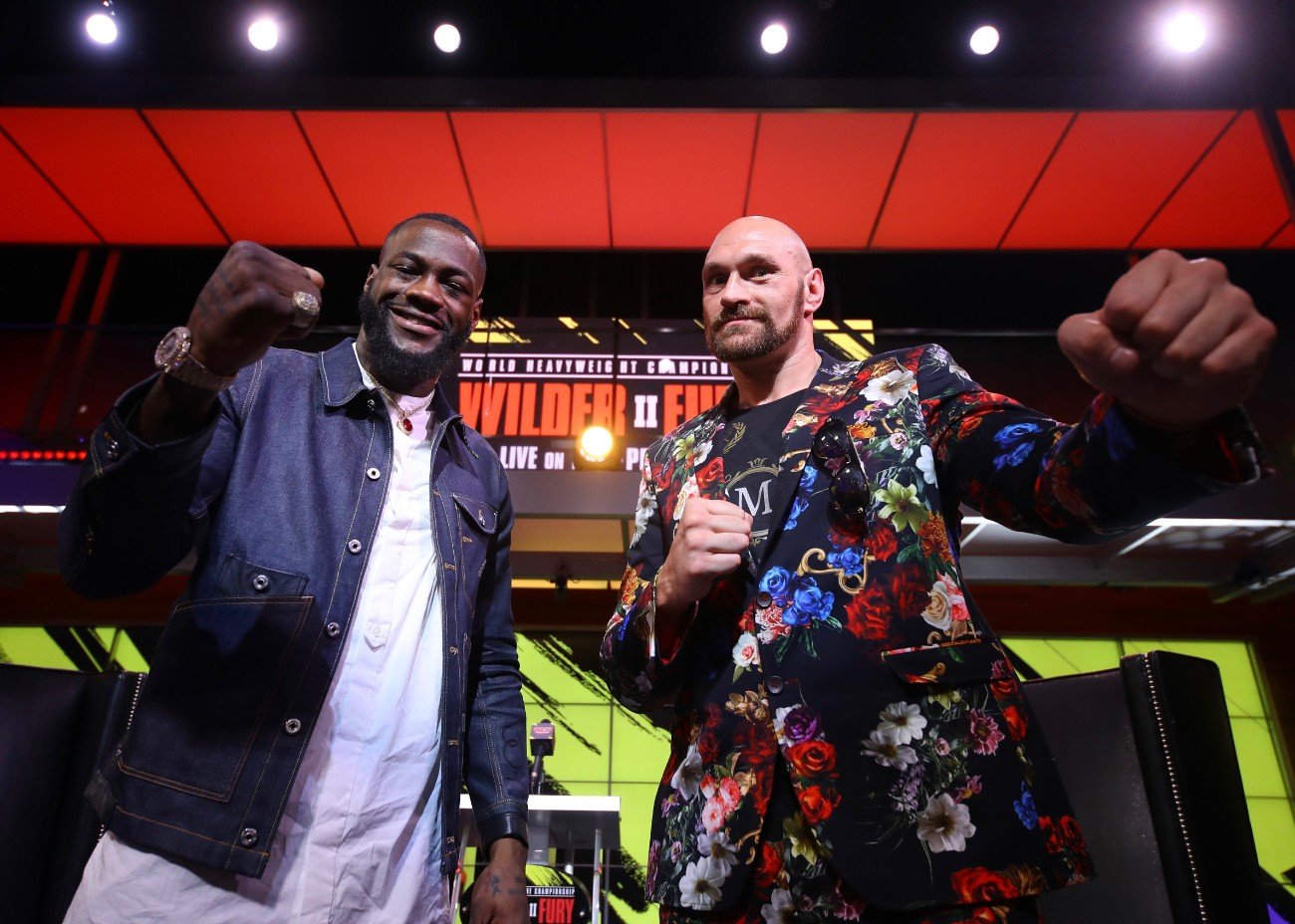 The two gargantuan heavyweights traded words and shared updates on training camp leading up to one of the most heavily awaited fights in recent memory.

A large media contingent was on hand to watch the undefeated titans square off once again, less than one month before they will finally meet in the ring to settle the score, 14 months after their unforgettable first clash.

Here is what the fighters had to say Saturday in Los Angeles:

“Things are going amazing. I’m the happiest I’ve ever been in my life. To come from where I come from, it’s amazing to be here. When you get a happy Deontay Wilder in training camp, you can definitely expect great things from me. That’s’ what I’m going to give you.

“We haven’t seen his power displayed like he’s been talking about. It hasn’t been continuous, like mine. I think he has pillows as fists. That’s what I felt in our last fight.

“With the strategies that he’s talking about, I don’t really know how to take it. I don’t know if he’s trying to throw me off my game by saying he’s going to knock me out. But it’s exciting to hear and I’m looking forward to February 22.

“Everything on his body is a target, not just his cut. Everything that is permissible for me to hit, I’m going to hit it.

“When you fight someone like me, it’s a mistake to tinker around with your training camp. I’m unpredictable in that ring. When you have too many opinions and too many people who think they have the remedy, it usually backfires.

“I think this win will be more special than the others. Because of the history that we have, with that controversial draw. I consider Tyson a brother of this era, especially in the heavyweight division. The other fighters don’t want to let themselves loose and have fun. We’re both able to enjoy what we do day after day. Because when the bell rings, anything can happen.

“Fighting a guy like Fury, you have to be careful. Time goes by so fast in the ring. You’re trying to do everything that you prepared for. With what he brings to the table with his boxing skills, you have to have some awareness of the clock. But with my power, it’s his job to really watch the clock and try to avoid me for 36 minutes.

“We both have to come in like we did the first fight, with our hearts on our sleeves and the warrior mentality that we always bring. When you get to this point, the scenery itself makes for a great fight. We all know when I come to fight, I don’t play around. We can play around here today, but we’re going to have that killer mentality in the ring.”

“I’m born ready. I’m feeling good in training camp. Everything has been going really well. There’s no injuries or excuses. It’s all dedication and sacrifice, one day after another.

“The first fight I wanted to go in there and out box him. It didn’t work. No matter what people say, I didn’t win. I count a draw as a loss.

“We’re giant heavyweights. I’ve had 20 knockouts, so I’m very capable of knocking people out. When you underestimate someone else’s power, you usually end up unstuck. Whether I’m a great puncher or not, I don’t believe anybody else can match me with heart and determination. I’m going to put my iron will on Deontay Wilder.

“I felt that I needed to get an edge in this fight. It’s not personal with me and my trainers, cutmen and nutritionists. It’s business. If I think someone else is going to improve my business, I’ll do it.

“How do you beat a massive puncher? You have to back him up. He gets massive leverage in those long arms while coming forward. I have to put him on the back foot and make him absorb some of my power.

“I’m the Gypsy King. There’s only been one and there’s only likely to be one going forward. That’s one belt that Deontay Wilder can’t ever win.

“He had a great performance against Ortiz. And he did what he was supposed to do. He knocks guys out. He was relaxed and calm under the pressure. I was impressed. Not by the knockout, but by the way he was conducting himself under pressure.

“I’m always real. Deontay Wilder has knocked out 43 opponents in a row. Even if I hate this guy, I respect that. He has amazing power and his name is up there with all-time greats. He’s a great puncher who gets the job done.”